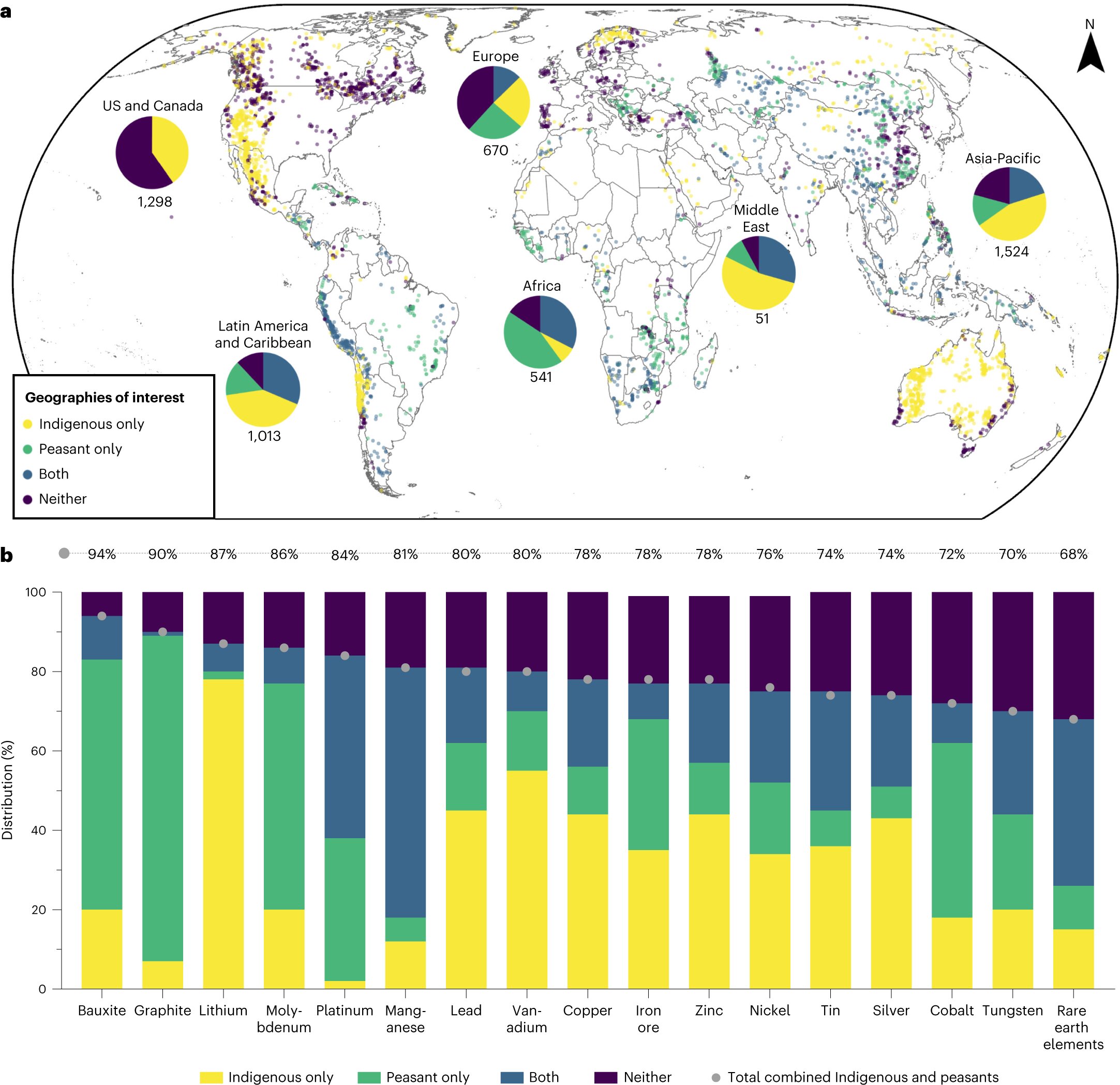 Vast quantities of minerals are needed to accelerate the transition to a clean energy future. Minerals and metals are essential for wind turbines, solar panels, and batteries for electric vehicles. But Indigenous peoples have raised concerns about more mining on their lands and territories.

A new study led by authors John Owen and Deanna Kemp, published in Nature Sustainability on Dec. 1, supports First Nations peoples’ concerns. We identified 5,097 mining projects involving about 30 minerals needed in the energy transition. Some 54% are located on or near Indigenous peoples’ lands.

These lands are valuable ecologically and culturally. Their soils, and land cover such as forests, store carbon which helps to regulate the planet’s climate. Typically, the lands are also intrinsic to Indigenous peoples’ identity and way of life.

Energy transition minerals are essential to tackling climate change. But First Nations people must have a genuine say in where and how they’re extracted.

When minerals and communities collide

The International Energy Agency projects lithium demand for electric vehicle batteries will grow 40 times on current levels by 2040. Our study found 85% of the world’s lithium reserves and resources overlap with Indigenous peoples’ lands.

Demand for nickel and manganese is projected to grow 20-25 times. We found 75% of manganese and 57% of nickel reserves and resources also overlap with these lands.

Copper and iron ore are essential for power generation, as well as its transport, storage and use. Some scenarios predict an increase in copper demand of more than 250% by 2050. We found 66% of the world’s copper and 44% of iron reserves and resources overlap with Indigenous peoples lands globally.

Free, prior and informed consent

Last year, Indigenous groups and from around the world signed a declaration calling on climate negotiators at the COP26 United Nations Climate Change Conference to commit to sourcing transition minerals more responsibly.

They also called on governments and corporations to obtain the “free, prior and informed consent” of Indigenous peoples in decisions that affect them.

This type of consent is enshrined in the United Nations Declaration on the Rights of Indigenous Peoples. It means Indigenous peoples should be able to accept or reject mining on their traditional lands, and to negotiate conditions such as protecting natural and cultural heritage.

Mining has hugely complex repercussions and can cause severe harms to societies, the environment and human rights. Consultation and consent processes take time. Companies and governments seeking to extract resources in haste are likely to fail to meaningfully engage with communities.

If new mining projects are fast-tracked, there is a huge risk of corners being cut. Without proper consultation and legal protections, the future supply of transition minerals could put Indigenous peoples’ lands at greater risk.

Weak laws must be strengthened

Australia has a shocking track record in protecting Indigenous heritage and obtaining consent.

In May 2020, Rio Tinto destroyed 46,000 year old Aboriginal rock shelters to mine iron ore, against the wishes of traditional owners, the Puutu Kunti Kurrama and Pinikura peoples.

Last week, responding to a federal parliamentary inquiry into the Juukan Gorge incident, Environment Minister Tanya Plibersek said the destruction of the rock shelters was “completely wrong“. She acknowledged the massive power imbalance when traditional owners negotiated with mining companies, and the lack of resources they can draw on.

Plibersek said legal reform is urgently needed to stop such destruction happening again. In this vein, the Commonwealth has signed an agreement with the First Nations Heritage Protection Alliance to co-design new cultural heritage laws.

Initiatives such as Dhawura Ngilan (Remembering Country) set a collective vision for best-practice heritage standards and legislation. Companies and investors should apply these protocols while our laws catch up.

In the meantime, other heritage sites in Western Australia are threatened by existing deveopment approvals. And the new Aboriginal Cultural Act still vests the minister with ultimate power to decide the fate of Aboriginal heritage.

What does the future hold?

To avoid a dual climate and cultural catastrophe, First Nations groups in Australia and elsewhere are joining forces and making their voices heard on the world stage.

At this year’s COP27 climate conference, the International Indigenous Peoples Forum on Climate Change hosted an Indigenous pavilion in the “blue zone“, where advocates gather to network and discuss important issues. Such global First Nations solidarity is becoming vital in the fight against climate change and achieving a just energy transition.

Indigenous peoples must also have access to the latest data and information—including what future mineral wealth lies on their lands. This is one practical step towards addressing power imbalances.

Solutions to the climate crisis must be found, and energy transition minerals are an important part of the puzzle. However, First Nations aspirations for maintaining the natural and cultural integrity of their lands and territories, and participating in decisions about mining, must be at the forefront.

Provided by
The Conversation


This article is republished from The Conversation under a Creative Commons license. Read the original article.

The Trouble with Harry – American Renaissance