8 Things You Didn’t Know About The Lunar New Year 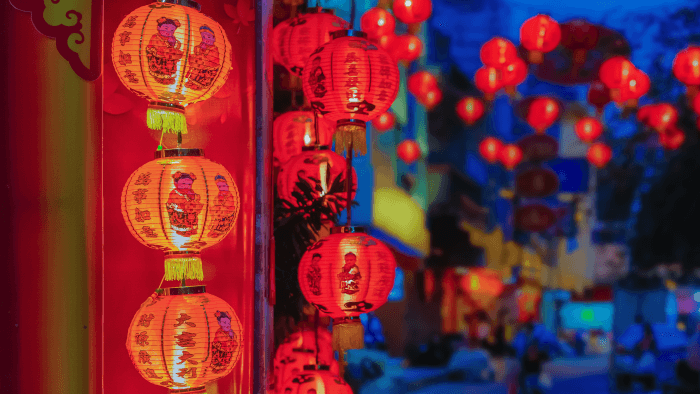 The Lunar New Year. Chinese New Year. The Spring Festival. Whatever you call it, it’s the celebration of the new year that begins on the first new moon that appears between January 21 and February 20. In 2023, the new moon falls on January 22, which is the official day of the Lunar New Year. The entire celebration extends from January 21, which is New Year’s Eve, to the full moon on February 5, when the Lantern Festival is held.

While most people have heard of Chinese New Year, it’s usually just referred to as a time for fireworks and dumplings. But all around the world, Chinese New Year is an expansive celebration of culture and life that is observed by one-sixth of the people in the world. To get ready for it, we explored some of the facets of the holiday.

1. It’s The Year Of The Rabbit

If you know one thing, it’s likely that each Chinese year is represented by a different animal. The 2023 Chinese New Year ushers in the Year of the Rabbit, and anyone born in this year is said to be kind, confident, quick-witted, earnest and goal-oriented. The year also has an elemental symbol assigned to it according to a 12-year cycle, with five elements in total (earth, water, fire, metal and wood). This new year is part of the water cycle, making it a Year of the Water Rabbit, which happens once every 60 years.

Beyond just revealing personality traits, the year in which you were born can determine a number of factors in your life, including lucky numbers and flowers. Depending on a person’s belief in feng shui, the year a person is born will affect the way a person should decorate their house, because varying colors and geographical directions are considered to bring prosperity.

The Chinese New Year dates back to the 14th century BCE, and one myth is that the ancient origins of the festival relate to a massive beast called the Nian (which happens to be the Mandarin word for “year”). Once every year, the Nian would come out of its home in the mountains and attack the nearby villages, taking their crops and, sometimes, their children. Fortunately, the villagers learned that the beast was scared away by loud sounds, fire and the color red. These mythological origins, then, say the holiday was created to deter the Nian. While this is often regarded as an ancient myth, there is no written evidence of the story before the 20th century, and there are iterations in which the celebration wards off more general evil spirits. Still, it’s a fun story that has been passed down over at least a hundred years.

3. The Country Goes On Red Alert

As alluded to in the story of the Nian, the color red is central to the celebration of the new year. Red lanterns are hung outside doors, red cutout papers cover the walls and gifts of money are given in red envelopes, which are called hóngbāo in Mandarin. Are physical envelopes too old-school for you? A number of apps, including the popular WeChat, now let you send virtual hóngbāo so you can celebrate Chinese New Year anywhere in the world.

While people would traditionally wear red during the festival, some think that’s a bit too flashy, so they’ve turned to silver and gold for their New Year’s outfits. The important thing is to avoid white and black, which are both associated with mourning.

Traveling during the holidays is terrible; that’s a universal fact, and Chinese New Year is no exception. The annual event has been termed the Chunyun period, and it’s the largest yearly human migration in the world. In 2019, the authorities in China worked to handle an estimated 3 billion trips by land, sea, rail and air.

Of course, that changed in 2020, and holiday travel has been significantly curtailed for the last three consecutive years. In 2023, numbers are expected to bounce back after China relaxed its pandemic restrictions. Still, China’s health officials are urging people to reconsider travel, so a return to pre-pandemic numbers isn’t expected. Officials are estimating 2.1 billion trips this year — double that of 2022, but far below 2019.

5. It’s The Most Explosive Holiday

China is famous for being the creator of fireworks, and it is still the largest producer of them. The country doesn’t export all of them, however, and it has one of the largest fireworks displays in the world on Lunar New Year’s Eve.

While the big displays are fantastic, Chinese fireworks are perhaps even more popular for personal use. Originally, exploding bamboo, or pao chuk, was used during Chinese New Year because when bamboo is lit on fire, the wood expands and eventually bursts with a bang. When black powder was invented, it was stuffed into the bamboo for an even louder and brighter explosion. Eventually, paper casings replaced bamboo to make firecrackers, which exploded in popularity and are used all over China to celebrate. But because of the dangers posed by firecrackers, there have been moves in the past few years to start banning the sale of fireworks. As expected, this legislation is very unpopular.

6. Cleaning Is An Important Part Of Observing The New Year

One of the yearly traditions that’s slightly less explosive is cleaning the house. In preparation for Chinese New Year, people wipe away all the old dirt that’s been cluttering their lives. It’s a big relief to literally sweep away the remains of the year gone by. But some believe that you should refrain from cleaning much in the days following Chinese New Year to avoid sweeping away the good luck. Starting a new year with a clean house is something pretty much anyone can get on board with, really.

7. The Reunion Dinner Is Central

Over the 15 days of festivities, Chinese New Year is filled with various traditions, from the opening fireworks to the closing Lantern Festival. The most important of all takes place the night before the new year, however. It’s the annual reunion dinner, when multiple generations of a family gather together. Often, the meal comprises eight different dishes, because the number eight is considered a symbol of prosperity in China. Courses generally include chicken, pork, fish, noodles and dumplings.

Depending on the family, there are any number of variations on traditions for Chinese New Year. The one thing that ties them all together is that it’s a time for reuniting with family, taking a break from everyday life and preparing for the year ahead.

The Lunar New Year is strongly associated with China, but there are also celebrations in various other parts of Asia. Vietnam (Tết), Korea, Tibet (Losar) and Mongolia (Tsagaan Sar) all have lunar holidays that begin on the same day as Chinese New Year. Japan also hosts some events during this time, but the country has officially observed New Year’s Day on January 1 for over a century now. While China gets the most attention because of its massive population and the various celebrations all around the world, each of these other Lunar New Years comes with their own set of traditions that reflect the culture and heritage of the celebrants.

How To Say Good Morning In 10 Different Languages