A New Trade Pact in the Indo-Pacific

The Indo-Pacific Economic Framework, the U.S.-led effort to counter China and foster economic engagement in the region, has officially launched. India, Vietnam, Indonesia, Thailand, Brunei and the Philippines have joined Japan, South Korea, Australia, New Zealand, Singapore and Malaysia to participate in the framework negotiations, which will aim to divert trade away from China to the United States. For the new pact to succeed, it will need to leverage existing security alliances as new economic components and opportunities arise.

Crucially, it will also need the participation of Association of Southeast Asian Nations (ASEAN) states, which are strategically essential for anyone hoping to control the Indo-Pacific. Washington has some catching up to do in this regard. Over the past few decades, U.S. priorities were in the Middle East and North Atlantic. The countries of Asia-Pacific took note, understanding that they could not expect much in the way of economic support from the U.S. This gave Beijing a chance to strengthen ties with ASEAN. For China, the bloc may be an important economic ally, but its true value is the maritime access it provides China’s export-oriented economy. It’s no coincidence, then, that Washington is homing in on ASEAN. 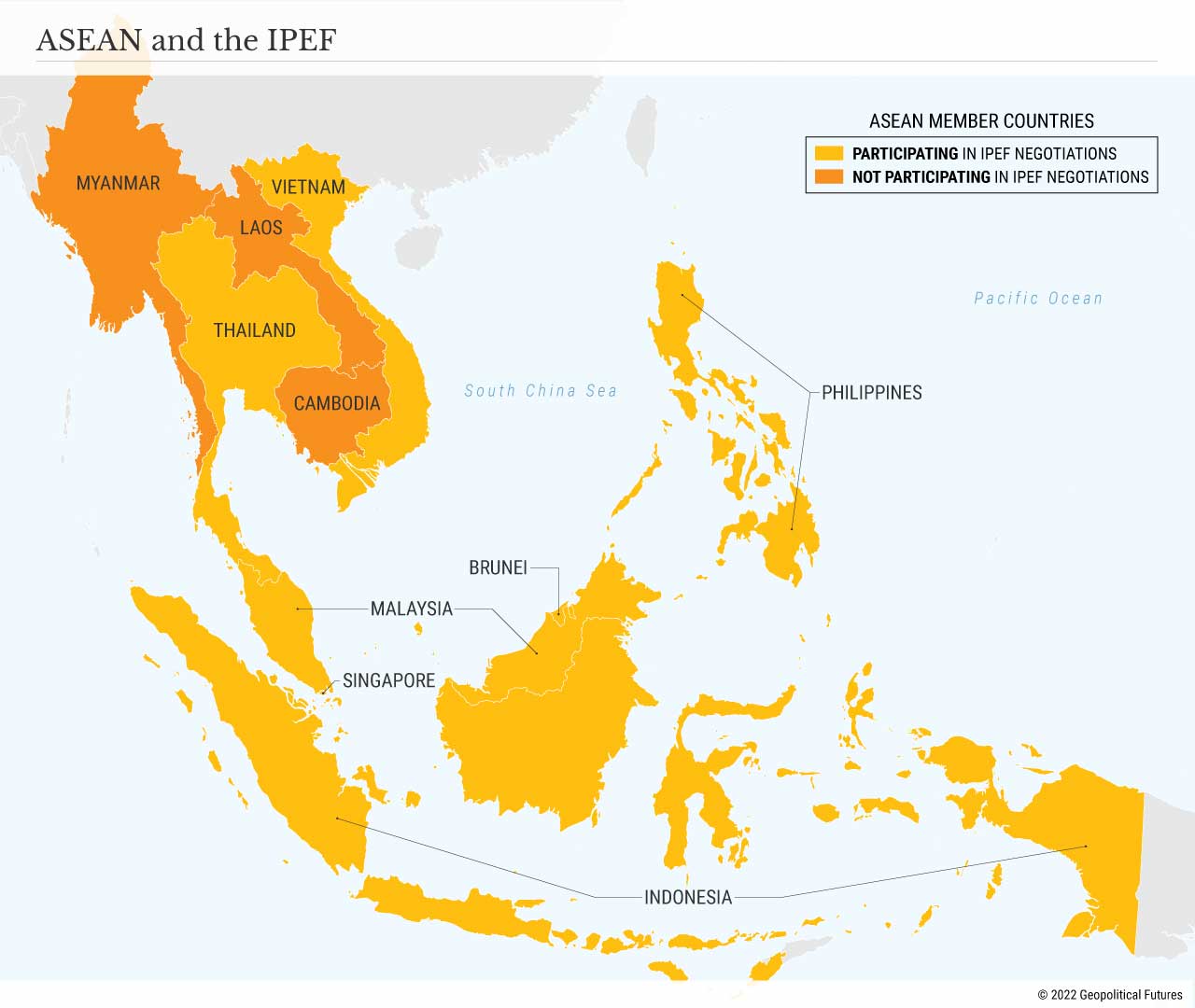 The current economic climate favors the U.S. Put simply, the only way ASEAN members can develop their economies is to ally with a stronger economic power. China’s economic trouble has put its reliability in question as investment projects stall, as trade flows grow more erratic, and as environmental and social problems imperil the Belt and Road Initiative. In light of the COVID-19 pandemic and the Ukraine war, ASEAN needs a stable partner more than ever. The U.S. economy is comparatively stable, and Washington is already trying to pivot to Asia in part to contain China.

As important, the Indo-Pacific Economic Framework (IPEF) means to spur economic activity among its members, albeit in a way that aligns ASEAN countries with U.S. rules and standards. So far, IPEF participants have pledged only to continue negotiations, which cover digital trade and trade facilitation, clean energy and decarbonization, supply chain resilience, and anti-corruption and taxes. Signatories will determine what will be negotiated in each area, and they can opt in or out of any area. (Flexibility is key in these early phases – ASEAN members want to make sure they don’t anger or jeopardize their ties with China – and while this may risk diluting any agreement IPEF makes, opting in and out could mitigate the problem.) 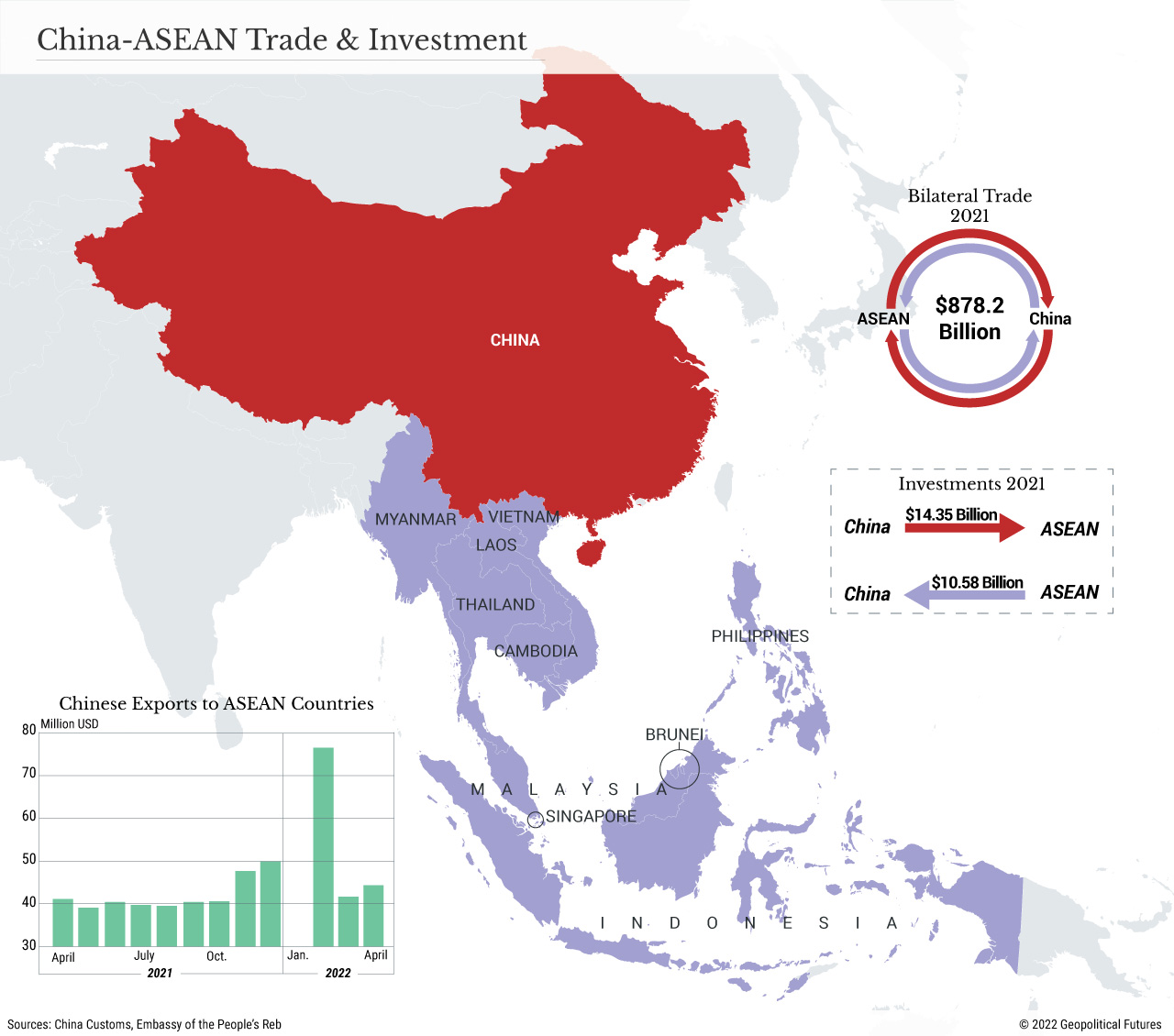 But there is an undeniable security component to the IPEF. In fact, Washington’s strategy for securing the participation of its members revolves around shared security interests and consists of three efforts: shoring up existing security allies, improving ties with India and improving ties with South China Sea claimant countries.

Existing security allies are a natural cornerstone of the IPEF. These include Japan, South Korea, Australia and New Zealand, all of which want to see a stronger and more resilient Indo-Pacific with diversified trade and increased commercial political and military action.

Japan’s and South Korea’s geographic positions are particularly important. Located along the Yellow and East China seas, they help restrict China’s direct access to the Pacific Ocean. Japan and South Korea have their differences, especially with regard to historical grievances and their latitude in countering China, but they support the U.S. military presence in the region, have extremely developed economies and have an interest in preventing China from becoming a regional hegemon. Through the IPEF framework, trade routes can be pushed in Japan and South Korea’s favor, anchoring regional states that previously were dependent on China firmly into Japan and South Korea’s economic orbit.

Australia and New Zealand are even more closely integrated into the U.S. security apparatus. Along with the U.K. and Canada, they are members of the Five Eyes intelligence alliance and share historical roots, aligned cultures and shared security interests. The U.S. and Australia cooperate closely on maritime Pacific issues; Australia provides strategic locations for U.S. naval assets, and the U.S. provides additional military support to protect Australian commercial interests, which are highly dependent on maritime trade. Canberra is especially enthusiastic about the IPEF as an alternative to Beijing. Notably, New Zealand is a little more skeptical of the IPEF because of its trade relations with China. New Zealand wants its options within IPEF formulated in a clear and detailed way in order to dive into further negotiations, which allow it to more easily judge potential consequences. The agreement can likely still offer a feasible alternative to China by providing trade links and new supply chains with ASEAN countries. Still, for New Zealand, like South Korea, relations with China need to be managed carefully.

The second effort, shoring up ties with India, is similarly vital. India’s geographic location makes it critical to the U.S. strategy to contain China westward by land. India may participate in the Quadrilateral Security Dialogue with the U.S., Japan and Australia, but it has long been the most reserved member of the group. Washington hopes the IPEF could be the economic incentive it needs to foster more security cooperation. For its part, India sees the IPEF as an opportunity to extend its influence farther east and southeast than it otherwise could, specifically by moving transportation and supply lines there that currently run elsewhere. Moreover, IPEF initiatives align with many of India’s national economic development initiatives such as transitioning to a net-zero economy, converting India into a global hub for making electric vehicles and transitioning to a pattern of energy consumption that relies more on clean renewables.

As important, India’s participation in the IPEF will draw in the participation of Thailand, Vietnam, Indonesia and Singapore, countries for which Indian trade is increasingly important. Inflation in these countries is soaring, and they need steady imports of food and fuel, which India can provide. If India can provide that through the IPEF, it will have greatly lessened these four countries’ reliance on China.

The remaining IPEF participants – the Philippines, Brunei and Malaysia – are countries that are disillusioned with failed Chinese promises and are thus ripe for the U.S. to peel away. These countries need a steady inflow of foreign direct investment to modernize their infrastructure with well-timed and structured projects. Belt and Road projects have been stalled in the Philippines and Malaysia, while Brunei has not received its promised amount of investment. The U.S., Japan and South Korea have already pursued ad hoc efforts to counter China’s Belt and Road efforts in these countries through the frameworks of the Free and Open Indo-Pacific, a promising but not well-structured set of mechanisms meant to improve the well-being of the region’s states. The IPEF supports improved economic activity for these countries as well as greater ties and access to developed economies capable of meeting their infrastructure needs.

But as with other countries in the IPEF, there are security dimensions to improved economic ties. All these countries are claimants of some maritime territories in the protracted South China Sea dispute. This, of course, makes their relations with China strained, especially now that China has once again become more assertive in the region. Individually, there is little these three countries can do to confront or sway China. Support from the U.S. and its stronger security allies in the region such as Japan and South Korea could induce them to veer from China and pull closer to the U.S.

Of course, there are ASEAN members that are not included in the IPEF: Cambodia, Myanmar and Laos. These countries are the least developed in the bloc and the most dependent on China, particularly in terms of foreign direct investment, and as such were not invited to join the group. They are simply too close to China, and their domestic affairs would present too many obstacles for Washington to overcome.

The other countries may well be more promising candidates, but they are not without their doubts. Their participation will depend on the rules and structures of the pact, and the extent to which those rules and structures indeed help them steer clear of China, which is still a wealthy, eager and geographically convenient partner. As far as the U.S. goes, the timing couldn’t be better.