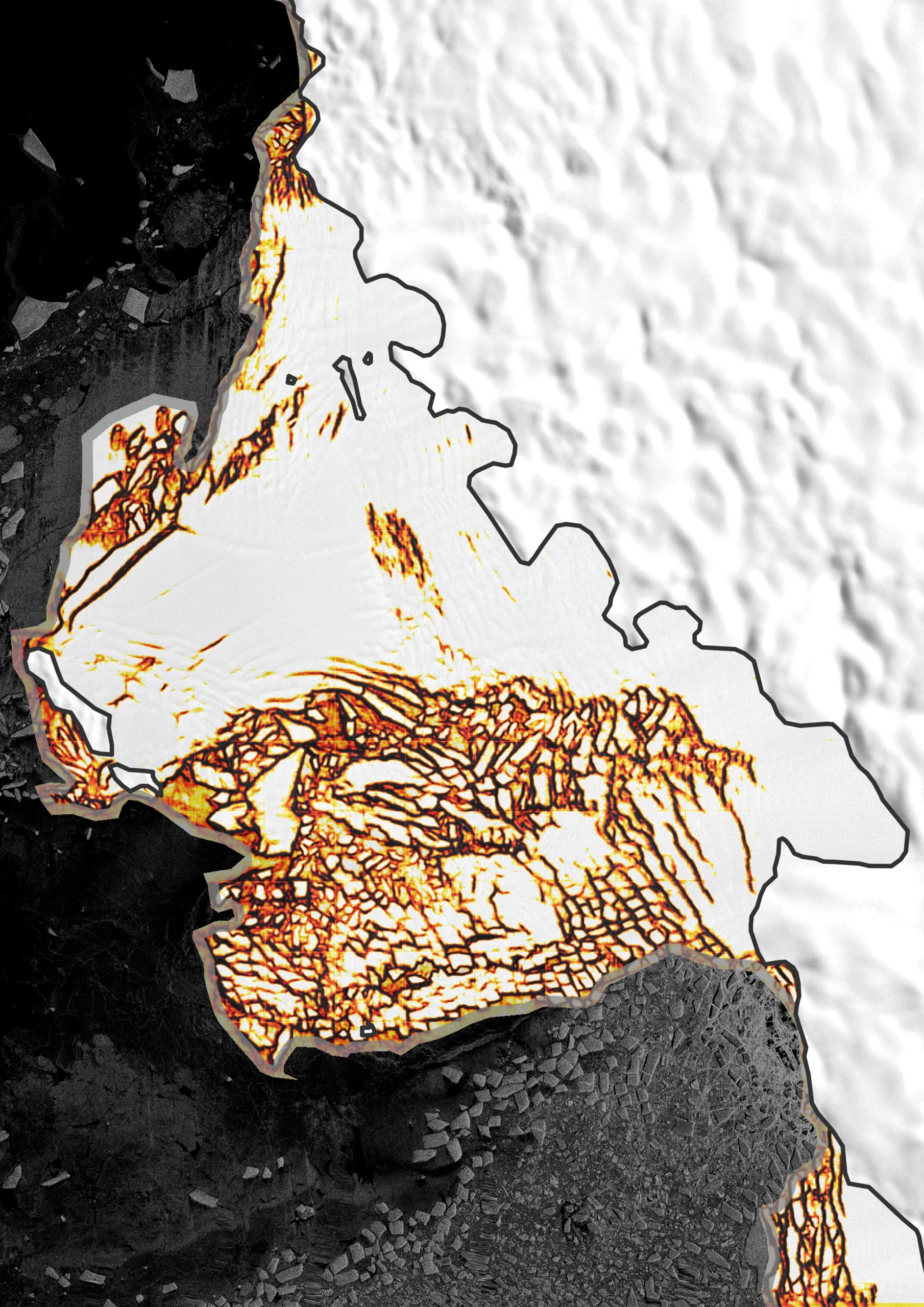 A team of scientists from the University of Leeds and University of Bristol have adapted an AI algorithm originally developed to identify cells in microscope images to spot crevasses forming in the ice from satellite images. Crevasses are indicators of stresses building-up in the glacier.

Thwaites is a particularly important part of the Antarctic Ice Sheet because it holds enough ice to raise global sea levels by around 60 centimeters and is considered by many to be at risk of rapid retreat, threatening coastal communities around the world.

Use of AI will allow scientists to more accurately monitor and model changes to this important glacier.

Published today (Monday, January 9) in the journal Nature Geoscience, the research focused on a part of the glacier system where the ice flows into the sea and begins to float. Where this happens is known as the grounding line and it forms the start of the Thwaites Eastern Ice Shelf and the Thwaites Glacier Ice Tongue, which is also an ice shelf.

Despite being small in comparison to the size of the entire glacier, changes to these ice shelves could have wide-ranging implications for the whole glacier system and future sea-level rise.

The scientists wanted to know if crevassing or fracture formation in the glacier was more likely to occur with changes to the speed of the ice flow.

Development of the algorithm

Using machine learning, the researchers taught a computer to look at radar satellite images and identify changes over the last decade. The images were taken by the European Space Agency’s Sentinel-1 satellites, which can “see” through the top layer of snow and onto the glacier, revealing the fractured surface of the ice normally hidden from sight.

The analysis revealed that over the last six years, the Thwaites Glacier ice tongue has sped up and slowed down twice, by around 40% each time—from four km/year to six km/year before slowing. This is a a substantial increase in the magnitude and frequency of speed change compared with past records.

The study found a complex interplay between crevasse formation and speed of the ice flow. When the ice flow quickens or slows, more crevasses are likely to form. In turn, the increase in crevasses causes the ice to change speed as the level of friction between the ice and underlying rock alters.

Dr. Anna Hogg, a glaciologist in the Satellite Ice Dynamics group at Leeds and an author on the study, said, “Dynamic changes on ice shelves are traditionally thought to occur on timescales of decades to centuries, so it was surprising to see this huge glacier speed up and slow down so quickly.”

“The study also demonstrates the key role that fractures play in un-corking the flow of ice—a process known as ‘unbuttressing.’ Ice sheet models must be evolved to account for the fact that ice can fracture, which will allow us to measure future sea level contributions more accurately.”

Trystan Surawy-Stepney, lead author of the paper and a doctoral researcher at Leeds, added, “The nice thing about this study is the precision with which the crevasses were mapped. It has been known for a while that crevassing is an important component of ice shelf dynamics and this study demonstrates that this link can be studied on a large scale with beautiful resolution, using computer vision techniques applied to the deluge of satellite images acquired each week.”

Satellites orbiting the Earth provide scientists with new data over the most remote and inaccessible regions of Antarctica. The radar on board Sentinel-1 allows places like Thwaites Glacier to be imaged day or night, every week, all year round.

Dr. Mark Drinkwater of the European Space Agency said, “Studies like this would not be possible without the large volume of high-resolution data provided by Sentinel-1. By continuing to plan future missions, we can carry on supporting work like this and broaden the scope of scientific research on vital areas of the Earth’s climate system.”

As for Thwaites Glacier Ice Tongue, it remains to be seen whether such short-term changes have any impact on the long-term dynamics of the glacier, or whether they are simply isolated symptoms of an ice shelf close to its end.

Provided by
University of Leeds