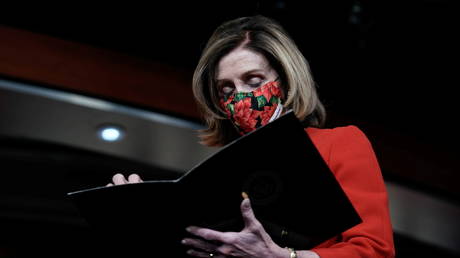 House Speaker Nancy Pelosi revealed that she intends to continue her party’s embrace of symbolic wokeness into the new year, with a rules package that eliminates “gendered terms” like “mother” and “father” from the House.

Despite underperforming at the polls in November, Pelosi’s Democratic Party managed to hold onto their slim majority in the House of Representatives, and Pelosi to her leadership of the House. The California Democrat unveiled a rules package for the 117th Congress on Friday that, among other ethics and accountability measures, bakes virtue-signalling wokeness into official procedure.

The proposed rules “honor all gender identities by changing pronouns and familial relationships in the House rules to be gender neutral.” What that means is that members of Congress will no longer speak about “mothers” and “sons,” but of “parents” and “children.” “step-brother” and “step-sister” will become “step-sibling.” “Himself or herself” will be replaced with “themself.”

Nancy Pelosi is really focusing on the issues that matter to the American people by striking gendered language like “mother, father, daughter, and son” from the House rules for the 117th Congress pic.twitter.com/ZE2iAg63Az

In an official press release, the House Rules Committee said that the changes ensure that “we are inclusive of all Members, Delegates, Resident Commissioners and their families – including those who are nonbinary.”

Furthermore, the new rules will require all standing committees to report on how their work addresses “issues of inequities on the basis of race, color, ethnicity, religion, sex, sexual orientation, gender identity, disability, age, or national origin.” They also call for the establishment of a permanent “Office of Diversity and Inclusion.”

That Pelosi’s party would engage in such performative identity politics is no surprise. Earlier this year, the Speaker led a gathering of House and Senate Democrats in taking a symbolic knee to honor George Floyd, with the group all clad in traditional African garb. After the photo opportunity, Pelosi repeatedly told the House that “Black Lives Matter” during a speech urging members to pass a police reform bill.

Also on rt.com
Democrats BEND THE KNEE to push police-reform bill, but George Floyd’s death may not be enough to convince Republicans

Likewise, Pelosi hasn’t missed an opportunity to take the exact opposite stance to President Donald Trump since the onset of the coronavirus pandemic. A month after Trump banned incoming flights from China, Pelosi urged tourists to visit San Francisco’s Chinatown, telling them it was “very safe to be in Chinatown.” Amid changing CDC guidance on mask wearing, Pelosi wore a mask during every public appearance once it emerged that Trump was less keen on donning his.

The 117th Congress will vote on the new rules package once it convenes in January.