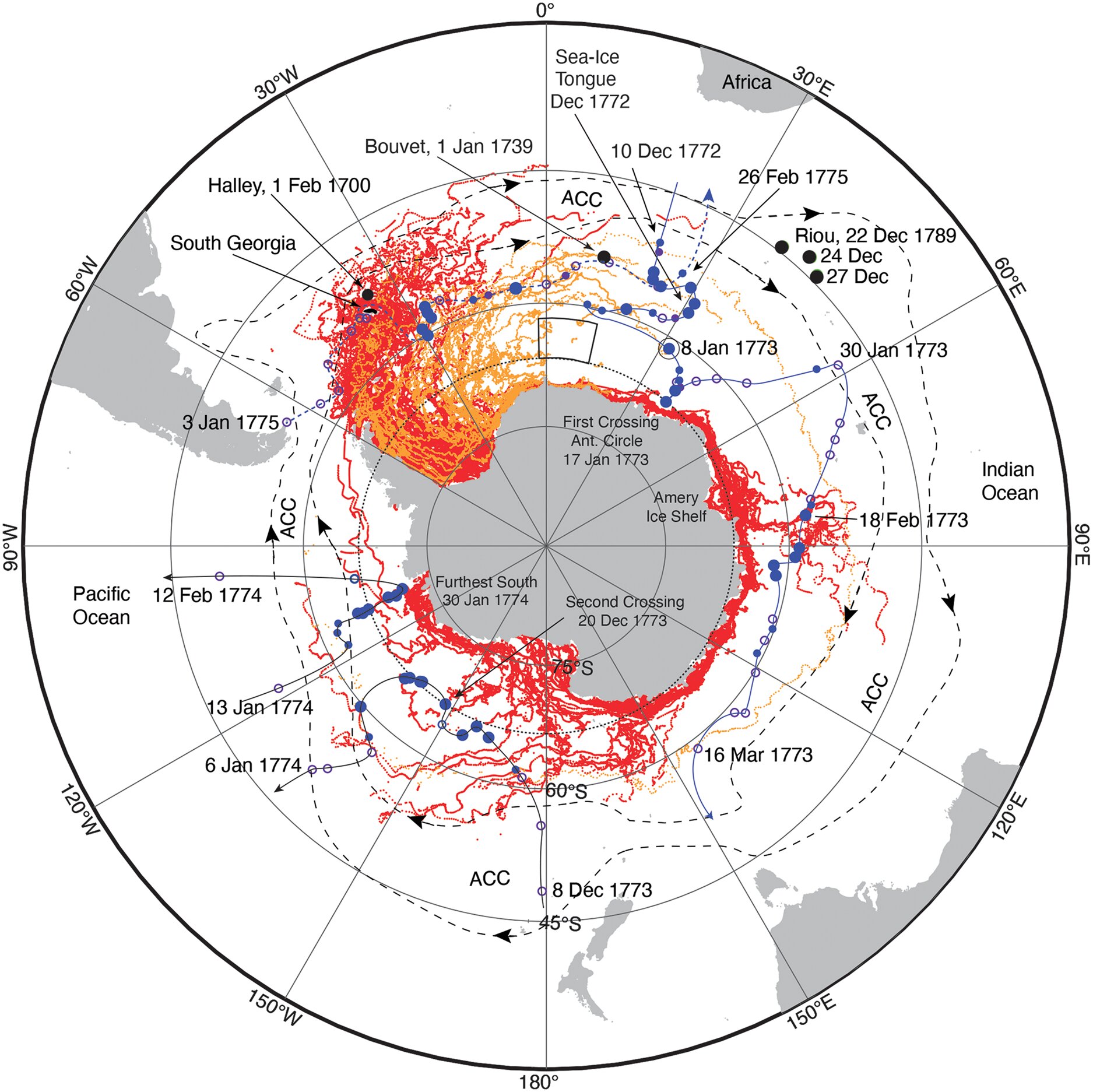 A new study comparing observations of large Antarctic icebergs from the 1700s with modern satellite datasets shows the massive icebergs are found in the same areas where they were pinpointed three centuries ago. The study shows that despite their rudimentary tools, the old explorers truly knew their craft, and it confirms that the icebergs have behaved consistently for more than 300 years.

Using primarily the journal records of Captain James Cook’s 1772–1775 Antarctic circumnavigation on the HMS Resolution (where he noted the positions of hundreds of icebergs), a trio of researchers from Brigham Young University, NASA’s Jet Propulsion Laboratory and the University of Washington’s School of Oceanography made comparisons with the two largest modern datasets available today: the BYU/National Ice Center and Alfred Wegener Institute datasets.

They found that Cook’s description of the iceberg plume east of Antarctica’s Amery Ice Shelf, along with iceberg distributions in the Weddell, Ross and Amundsen Seas, agree with modern data. They also found additional iceberg tracking by Edmond Halley in 1700, Lozier Bouvet in 1739 and Edward Riou in 1789 are consistent with modern observations.

“Where they saw icebergs, we see icebergs now; where they didn’t seem them, we don’t see them,” said study coauthor David G. Long, BYU professor of electrical and computer engineering. “The old data from these explorers may not been very good, but it’s all that we’ve got from that time—and it’s good enough.”

Cook’s observations make up 95% of the historical data used for comparison in the study. His crew used the Larcum Kendall K1 watch in combination with a sextant to track longitude on their journey. The K1 watch carried a heavy price tag (£450—the ship Cook sailed for the trip, the HMS Resolution, cost £1,800) so Cook took great care of the device, requiring the commander, first lieutenant and astronomer all present when it was used.

Lead study author Seelye Martin extracted Cook’s iceberg observations from a line-by-line search of Cook’s journal-turned-book about his journey: “A Voyage Towards the South Pole, and Round the World.” It turns out that when possible, Cook recorded his position alongside his iceberg observations, which he referred to as “ice islands,” “ice isles,” and “hills of ice.”

“Cook kept pretty good records, but they’re not perfect,” Long said. “They’re basically journal entries. He took some days off. Sometimes he would just say ‘saw a lot of ice in the ocean.’ Wish it was a little better, but on the other hand it was pretty unique.”

After creating a spreadsheet of Cook’s data (along with data from Halley, Bouvet and Riou), Martin, Long and coauthor Michael Schodlok plotted the voyagers’ trips and observations on a map of Antarctica that includes the modern iceberg data. BYU’s part of the dataset uses low-resolution satellite scatterometer radars to track icebergs while the National Ice Center data consists of iceberg positions derived from visible, infrared and radar satellite observations. The Alfred Wegener Institute uses satellite transponders to track icebergs from the Weddell Sea.

The diagram provides a visual confirmation of how consistent the early explorers observations are with modern iceberg observations.

Long said since the databases they use track rather large icebergs which are not as sensitive to climate change. Because of that, the study doesn’t necessarily make a connection to global warming issues, but the result of no significant iceberg change from 1700 to 2000s is fascinating to consider.

“It’s the first comparison that I’m aware of, of a satellite iceberg database with pre-modern era data,” Long said. “I have always been proud that my database goes back multiple decades, but here we’re going back multiple centuries…

“I guess it’s a good reminder to keep a journal; you never know how it will be used in the future,” he said.

The research appears in the Journal of Glaciology.