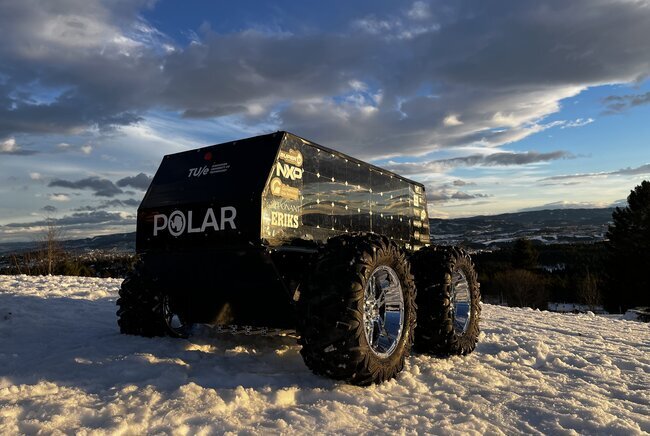 Team Polar, a student team at Eindhoven University of Technology (TU/e), took their first rover to perform research in the Norwegian snow in the first week of January. The team is dedicated to developing an independent rover that can perform Antarctic research. This is their first working prototype and the team is eager to set a benchmark for future developments. They will present their findings and the rover itself at the reveal event, January 20, 2023.

The Earth is facing its biggest problem in centuries: climate change. To fight climate change, we need to understand better the factors behind it. However, understanding it requires gathering information about our planet in places where nature is still pristine and more or less unaffected by climate change, as well as places where the consequences of global warming and climate change can be observed first-hand. Circumstances like that are usually found in extremely cold and remote environments like the Arctics, Antarctica, and the oldest glaciers. At the moment, research is often carried out inefficiently and in very expensive and unsustainable ways.

Team Polar wants to create an alternative way to do extensive environmental research in the coldest places on our planet by developing an unmanned rover. This rover will eventually operate and perform research all by itself—similar to how the Martian rovers operate on the surface of Mars—and collect invaluable data about the effects of climate change. The team started its mission in 2018 and now presents its first working prototype: the rover “Ice Cube.”

Research in the snow

Development of the rover took place at the Eindhoven University of Technology in the Netherlands, a country notoriously devoid of deep snow most winters these days. That’s why the team took their rover to Trondheim in Norway, to see how their first rover “Ice Cube” performs in the snow. “We can test a lot of things in our lab, but not how the rover drives in the snow, how the solar panels handle the snow and temperatures, and how cold it will get inside the rover and how quickly it becomes very cold,” explains team manager Laurenz Edelmann.

“We have built our first rover with off-the-shelf components. That may or may not present some challenges for us. And, we may find that certain components will need to be custom-made and designed for future rover models. That’s why this rover will be a benchmark for us and for future teams.” The rover will be remote controlled for now, allowing the team to hand-pick the locations they want to study on this trip. This allowed the team to gather essential insights that can help the team to ensure that their next rover will be fit for a mission to Antarctica.

The team was in Norway to run their experiments from January 4 until January 8. There, they saw their rover drive through the snow naturally. They also determined which components worked fine, and discovered a handful of items that broke and needed replacing. “Overall, we were super impressed with the way Ice Cube tackled the snow and handled itself,” says Edelmann. “We gathered valuable data, and great footage to present at our event.” There was also time set aside on the return journey to the Netherlands to visit other universities. “We love to maintain good relations with other student teams at technical universities in Europe. That’s why we made sure to present our rover at the universities of Trondheim (NTNU), Kopenhagen (DTU), and Braunschweig (NFF),” explains Edelmann.

“We hope to inspire and inform local student teams how to tackle an ambitious goal, such as building an Antarctic research rover successfully. And, of course, to forge new alliances and collaborations with our colleagues at other institutions.”

Provided by
Eindhoven University of Technology