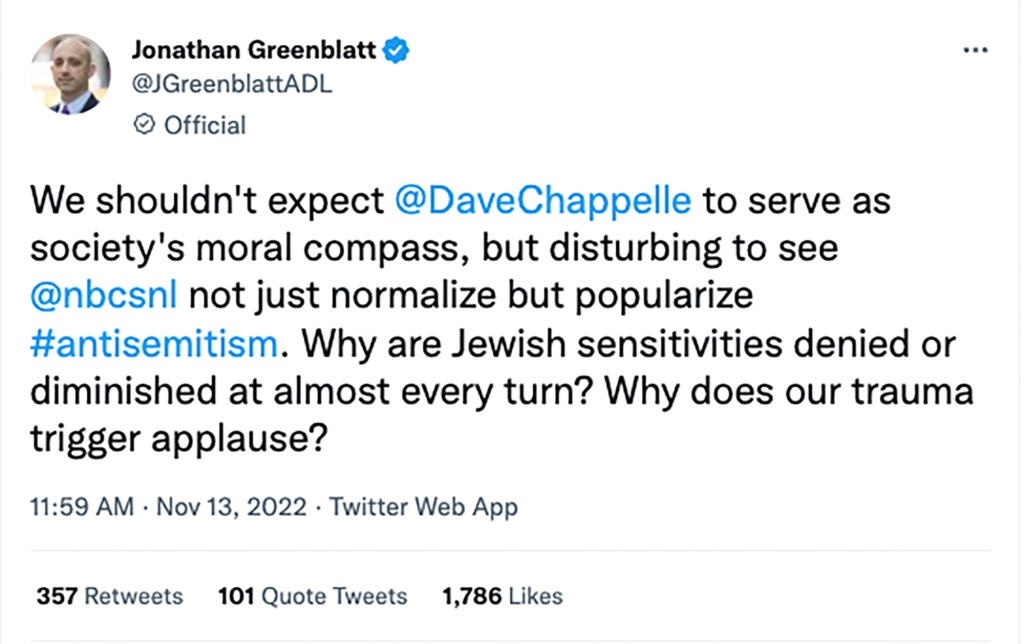 Dave Chappelle’s opening monologue on “Saturday Night Live” was blasted by the head of the Anti-Defamation League for popularizing anti-Semitism.

“Why are Jewish sensitivities denied or diminished at almost every turn? Why does our trauma trigger applause?”

“I denounce anti-Semitism in all its forms and stand with my friends in the Jewish community,” Chappelle started out.

“And that, Kanye, is how you buy yourself some time.”

Chappelle’s focus on the topic didn’t stop there.

“I’ve probably been doing this for 35 years now and early in my career I learned there are two words in the English language you should never say together in sequence and those words are ‘The’ and ‘Jews,’” he said. “I never heard someone do good after they said that.”

Chappelle said he grew up around Jewish people and has a lot of Jewish friends, “so I’m not freaked out by your culture.”

“Why do some of your people dress like Run-DMC?” he joked in reference to the hip-hop group.

He then mentioned Irving, who has been suspended by the Nets after he shared an anti-Semitic film on social media and was slow to apologize for it.

“Kanye got in so much trouble, Kyrie got in trouble,” Chappelle quipped.

“Like a lot. But that doesn’t mean anything, you know what I mean? There are a lot of black people in Ferguson, Missouri, it doesn’t mean we run the place.”

He added that the “delusion that Jews run show business” was not crazy to think, but “it’s a crazy thing to say out loud at a time like this.”

Other people over social media put Chappelle on blast for his performance while some defended him.

“The Dave Chappelle monologue on @snl tonight was the classic stand up he is known for … current events, timely and funny,” she said in a tweet.