The only Party that is rising fast is the Anti-Party 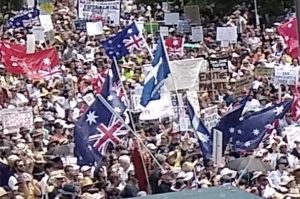 The Majors and the media ignored the biggest protests in decades, but all those voters are out there somewhere…

The system is broken and more and more people know it. Both major parties are facing very low primary votes in Australia.  Fully 29% of voters are wandering around in the political wilderness looking for another option — a record in Australian politics.  But just imagine how big that number of minor party voters would be if the news outlets served up more than the same-old two-party-dichotomy? At the moment the nightly news ignores every minor party unless they can mock them, or lord forbid, the journalists themselves want to vote for them — like the Teal-Green-Independents?

The only time a minor party gets interviewed is after the election and if they win the Preferences lottery.

Newspoll: Labor in front of Coalition but lead narrows

According to an election-eve Newspoll, commissioned by The Weekend Australian, Labor would be positioned to form majority government if the results are replicated at the polling booths on Saturday.

It would confirm Mr Albanese as the first modern day leader from the Labor Left to win office from Opposition.

But it would also mark a schism in Australian politics amid a flight to independents and minor parties with a record 29 per cent of voters claiming they intended to vote for anyone other than the Coalition or Labor.

Combined, the level of support for both major parties would mark a record low heading into an election.

For many minor parties the only advertising they can afford is to get their name onto the voting slip as a one issue party.

Voters in WA should know that Cam Tinley set up and ran the No Mandatory Vaccination Party in the WA State Election last year and did quite well even though this was before a single mandatory vaccination order even existed in WA. But when he tried to register for this federal election, he claims he did everything right, and met all the deadlines, but the Australian Electoral Commission failed to tick all the boxes they were supposed to check, and ran the clock out — thus preventing him from registering the party. If that’s what happened, it doesn’t seem legal to me. His name is on the ticket as “Unaffiliated” or Group P on the Senate form with Tricia Ayre. I don’t know what his other policies are, but at least we know where he stands on vaccination.

How to track your macros