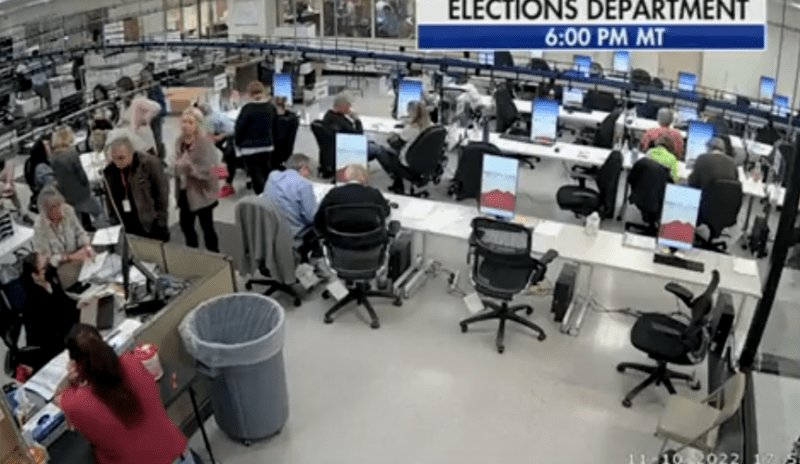 The election results in Arizona will likely be delayed past the weekend as a Maricopa County spokesperson said the counting of ballots will not be done Friday as original expected. The nation anxiously awaits the results of the gubernatorial election and senate races.

Kari Lake faced off against Democrat Katie Hobbs, who refused to step onto the debate stage and address her opponent, while Blake Masters seeks to unseat incumbent Mark Kelly for an Arizona senate seat.

Ali Bradley reports, “AZ: Spokesperson for #MaricopaCounty elections tells me the majority of ballots won’t be done being counted until after the weekend. They initially anticipated 95-99% of ballots to be completed by Friday. An historic 290k ballots were dropped off #ElectionDay causing the delay.”

Since the early morning hours of Election Day, voters experienced issues with Maricopa County’s tabulator machines, with one polling worker revealing that around 25 percent of ballots were being rejected.

Since then the counting of votes has been trickling in, especially after 290,000 ballots were dropped off Election day. There has been much speculation as to why there are so many delays, and accusations levied at election officials, who are blamed for delaying and stalling the process.

On Wednesday evening, Maricopa County officials revealed that 70 out of 223 voting locations, or nearly one out of every three, were impacted by printer issues on Election Day.

According to a joint statement from Chairman Bill Gates and Vice Chairman Clint Hickman, “The printer settings for the Ballot-On-Demand printers at Vote Centers were the same ones we used in the August Primary. The paper was the same thickness. Prior to the General Election, the Elections Department test-printed and test-tabulated hundreds of ballots without issue.”

“We are committed to finding out what factors changed that led to issues at 70 Vote Centers on Tuesday.  We are grateful to county techs who found a fix to the problem by adjusting printer settings,” the statement said in part.

The statement said that around 7 percent of ballots, or around 17,000, were impacted by the printer issues.

According to AZ Mirror, Republicans voting by mail was down during the lead-up to the election, with Democrats leading early turnouts. Republican voters had been expected to turn up in force on Election Day.

Speaking with Charlie Kirk on Tuesday, Turning Point Action Chief Operating Officer Tyler Bowyer revealed that his ballot, and many others, had been printed so badly that machines couldn’t read the.

“If you go in and you check in and your ballot isn’t scanning you need to ask them for another print,” Bowyer explained. “I just experienced it myself. I personally just went and requested a ballot.”

Bowyer explained that his ballot had been misprinted, and that “it was so blotchy from the printer that the scanner could not read it.”

“I believe that is part of the problem of why people aren’t having their ballots be read, is that you have bad equipment, faulty equipment, you have machines that need to be replaced, printers that need to be replaced, and the poll judge there told me they requested two hours ago for a replacement and they can’t even get people to pick up the phone in Maricopa County,” he said.