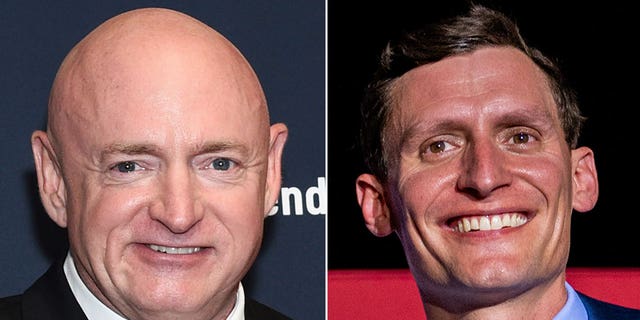 Kelly, a former NASA astronaut, was seeking a full term as Senator of Arizona in the 2022 race, after winning the 2020 race against Martha McSally, the Republican who was serving the rest of John McCain’s term after he passed away while in office.

Throughout the election cycle, the race was under the national spotlight, being one of the best pickup opportunities for Senate Republicans this year.

Kelly and Masters only participated in a single debate, but the pair lit up the stage in one of the most closely watched matchups of the cycle.

MARK KELLY LIKES WHAT ARIZONA HAS BECOME AS A RESULT OF THE SOUTHERN BORDER CRISIS: BLAKE MASTERS

During the heated face off, Masters suggested that Kelly and President Joe Biden were central contributing factors to rising costs, the crisis at the southern border, and crime.

Abortion was also a centerpiece of the race, after Masters openly voiced his pro-life views, believing abortion should be banned with exceptions, while Kelly would not specify his pro-abortion position despite using it as a talking point throughout his campaign.

During their debate, Kelly was asked by the moderator if he supported abortion after six, seven or even eight months of viability. “I have supported Roe v. Wade,” Kelly responded, avoiding a clear response to the question.

Throughout his campaign, Kelly touted his pro-abortion views, but would not say which restrictions, if any, he supported when pressed by his opponent and asked Fox News Digital on several occasions.

KARI LAKE ‘100% CONFIDENT’ SHE WILL BE NEXT ARIZONA GOVERNOR

Kelly greatly outraised Masters, reportedly raking in $21 million from the July to September fundraising period, while Masters only added $4 million to his campaign wallet during the same time frame.

“Thank you to the people of Arizona for re-electing me to the United States Senate. From day one, this campaign has been about the many Arizonans – Democrats, Independents, and Republicans – who believe in working together to tackle the significant challenges we face. That’s exactly what I’ve done in my first two years in office and what I will continue to do for as long as I’m there. It’s been one of the great honors of my life to serve as Arizona’s Senator. I’m humbled by the trust our state has placed in me to continue this work,” Kelly said.

“Congratulations to Senator Mark Kelly on his victory. Mark’s life has been defined by service – as a combat pilot in the Navy, an astronaut with NASA, and now in the U.S. Senate,” Peters said.

He added: “Arizona voters stood with Mark because he cuts through the political noise, solves problems and delivers results, no matter how difficult the mission. Arizona’s working families, and our country, will continue to be better off with Mark’s independent voice in the Senate.”