Arizona’s Elections Are an International Embarrassment 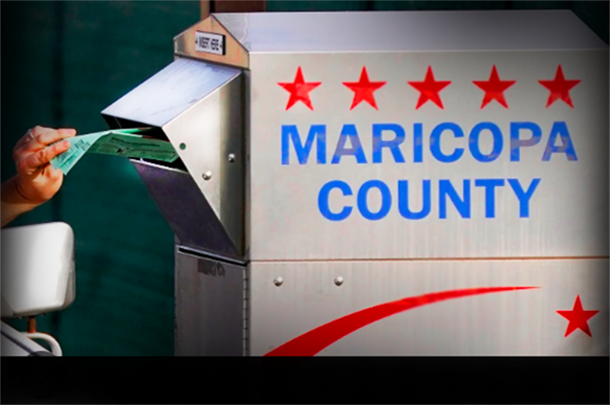 The latest from Arizona’s midterm election debacle: the state’s Democrat-run elections office is now claiming that they won’t be able to count all the votes until ‘some time early next week.’

Based on this, it should be pretty clear to everyone that those who were suspicious and raised serious questions about integrity and transparency of the disastrous 2020 election – have now been vindicated.

After three days of delays and slow walking ballots, election officials are taking their time. Meanwhile, every other U.S. state except for Nevada – were able to give their final results by the end of election day. Oddly, the problems seem to be centered around states and cities run by Democrats.

Democratic governor candidate Katie Hobbs is said to have a slight lead over Republican candidate Kari Lake, but officials are now claiming there are roughly 622,455 ballots left to be counted.

And that number keeps getting bigger, as various and sundry boxes of votes keep ‘turning up.’ For the average lay person, it’s almost impossible to know what’s going on, and why.

Residents are furious, and aloof election officials have given them no reason to allay those fears. Shawn Fleetwood from The Federalist writes…

Two days have passed since polls closed in Arizona and unsurprisingly, election officials in the state have failed to provide voters with the final results of numerous highly contested races.

As of this article’s publication, none of Arizona’s contested statewide races have been called for any of their respective candidates. With 70 percent of votes tabulated, Democrat Katie Hobbs leads her Republican rival Kari Lake in the gubernatorial race by fewer than 13,000 votes, while Democrat Mark Kelly leads Republican Blake Masters by a little less than 95,000. The races for Arizona Attorney General and Secretary of State also remain up in the air, with both still too close to call.

According to the Associated Press, there are approximately 600,000 ballots — roughly a quarter of all those cast — that have yet to be tabulated as of Thursday afternoon, with a large segment of these votes coming from the state’s most populous county, Maricopa. On Wednesday morning, Maricopa officials estimated that there are “more than 400K ballots left to count,” with the locality receiving “275K early ballots on Election Day.”

NEW: Tabulation for the day is now underway. We estimate more than 400K ballots left to count in Maricopa County:
•We received ~275K early ballots on Election Day. In 2020, that # was 170K. Will know exact number later. These must be processed and signature verified. 1/2

The chairman of Maricopa’s Board of Supervisors Bill Gates has since told a CNN reporter on Thursday that the county doesn’t expect to have all of their votes finalized until “early next week.”

The Chairman of Maricopa County’s Board of Supervisors just said that there are around 400,000 ballots left to be counted and that they won’t be done until “early next week.” pic.twitter.com/9zQuZKyLtG

The delayed counting in Maricopa comes on top of the county’s Election Day fiasco, where vote tabulation machines in roughly 20 percent of Maricopa’s voting locations stopped working due to a “printer issue.” Local officials have since issued a public apology for their gross incompetence, saying in a statement that they are “confident in the work still to be done to count every vote securely and accurately.”

But the problems witnessed throughout Arizona this week are hardly exclusive to the 2022 midterms. Earlier this year, it took two days for election officials to determine that Kari Lake had won her race to become Arizona’s GOP gubernatorial candidate. As described by the New York Post, “[e]arly election results showing only mail ballots received before Election Day” had given the advantage to Lake’s chief opponent, Karrin Taylor Robson. Lake’s victory was only realized after Maricopa County had released results from “thousands of mail ballots” that were dropped off at voting locations on Election Day.

Similar delays in election results were also notable in the 2020 presidential contest between former President Donald Trump and then-candidate Joe Biden. While some outlets such as the Associated Press and Fox News prematurely called the state for Biden, most of the race’s final vote tallies weren’t officially known until a week later.

Arizona’s Elections Are a Joke

While countries with tens of millions of citizens, such as France and Brazil, are able to tabulate nationwide election results within 24 hours, the Grand Canyon State has continued to disrespect its voters by repeatedly leaving them in limbo and turning what’s supposed to be Election Day into “election season.” International election observers have regularly pointed to delayed election results as one of several warning signs of incompetent election administration, and although that doesn’t mean there was impropriety in this year’s Arizona elections, the failure to tabulate votes in a timely and efficient manner does nothing but undermine voters’ confidence in the electoral process.

Much like their counterparts in Washington, D.C., Arizona’s Republican leaders such as Gov. Doug Ducey have had numerous chances over the past two years to resolve delayed vote tabulations; and at every available opportunity, they have simply chosen to ignore it. In Kari Lake, many Arizona Republicans see a leader who tackles challenging issues rather than runs from them. And given what the public has witnessed over the past two years, it sure looks like the state could use one.