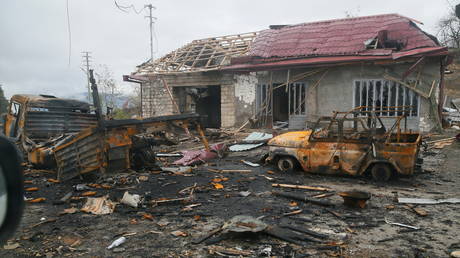 The war in Nagorno-Karabakh has sent tens of thousands of ethnic Armenians fleeing from the hostilities – and a peace deal, perceived by many as Armenia’s surrender, has left little hope of return, a family of refugees told RT.

Some 90,000 civilians have fled Nagorno-Karabakh over the past few weeks as the forces of the breakaway region, supported by Armenia, clashed with Azerbaijani military troops.

The self-proclaimed republic broke away from Azerbaijan back in the 1990s. The region, populated predominantly by ethnic Armenians, lived in the legal gray zone – and relative peace – for some 30 years, until the new war broke out late in September.

While Eremyan did not initially intend to leave her home behind, she said she had to do so for the sake of her children, as Stepanakert has been repeatedly subjected to shelling and bombardment. Eremyan fled to Armenia’s capital, Yerevan – and she and other refugees have received a very warm welcome from the locals.

In addition to refugee shelters and charities, private Armenian citizens sought to help the refugees. Nanar’s family, for instance, has been sheltered by a local woman.

“I thought something needs to be done and I’ve started looking for a family to help. They’ve found me, and I’ve found them. They’ve been living with me since October 1,” the woman told RT.

The peace deal reached by Armenia and Azerbaijan this week did not bring much relief to the refugees. The agreement has been largely perceived as a surrender by Armenians and triggered mass protests across the country.

The deal has returned many Nagorno-Karabakh settlements to Azerbaijan’s control – and that news alone has triggered a new wave of refugees. Nanar believes Baku will never allow them to coexist peacefully, and that many ethnic Armenians will never be able to return home to Nagorno-Karabakh.

35 mins ago The Hill

35 mins ago The Hill