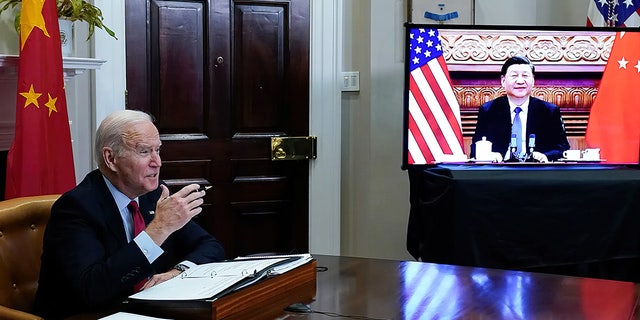 President Biden will meet with Chinese President Xi Jinping for the first time since entering the Oval Office on Monday as world leaders head to Indonesia for the Group of 20 summit.

Biden and Xi are expected to discuss efforts on how they will deepen lines of communication between Washington and Beijing as tension between the two nations remains high, the White House said Thursday.

They will also address how to “responsibly manage competition” and will “work together where our interests align” particularly on geopolitical challenges that effect the global community.

“The two leaders will also discuss a range of regional and global issues,” the White House added in reference to a litany of challenges that have arisen in recent years.

The White House announcement came just hours after it was reported that Russian President Vladimir Putin would not be attending the summit next week — removing any speculation over whether Biden and the Kremlin chief would meet.

The U.S. and its Western allies have been income increasingly critical of China, and the Biden administration listed the Asian superpower as its chief threat late last month despite increasing security concerns globally.

President Biden meets with China’s President Xi Jinping during a virtual summit from the Roosevelt Room of the White House in Washington, D.C., on Nov. 15, 2021.
(Mandel Ngan/AFP via Getty Images)

China’s refusal to condemn Russia’s war in Ukraine, Xi’s increasingly bolstered relationship with Putin and Beijing’s aggression in the region — like the 26 warplanes and four naval vessels launched near Taiwan on Thursday — have had the U.S. on heightened alert when it comes to its Eastern adversary.

The White House did not detail whether China’s aggression towards Taiwan will be on the agenda for Monday, and Biden has struggled to walk the line when it comes to the U.S.’ stance on the island.

Biden made headlines and rankled Beijing earlier this year when he said he would deploy U.S. soldiers to Taiwan if China invaded the island and disrupted the regional status quo.

Taiwan identifies as a sovereign nation with democratic values, but it is officially recognized by China, the United Nations and the U.S. as part of the one-China policy.

Biden later reaffirmed Washington’s commitment to the one-China policy and said the U.S. does “not seek conflict” or a “Cold War” with Beijing.