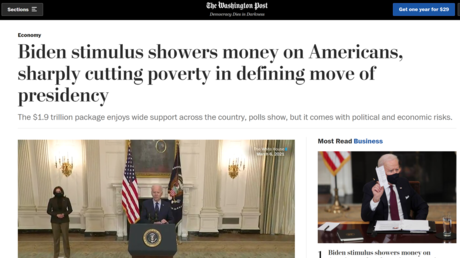 Washington Post has been mocked for its overly-enthusiastic headline that called the coronavirus relief bill a “defining move” of Joe Biden’s presidency, poised to “sharply” cut poverty by “raining money on Americans.”

After the Senate narrowly passed a $1.9 trillion coronavirus relief bill on Saturday, and President Joe Biden promised that eligible Americans will start receiving their $1,400 stimulus checks from this month onwards, Washington Post tried to explain that the massive rescue package is more than just about this modest handout.

However, titled ‘Biden stimulus showers money on Americans, sharply cutting poverty in defining move of presidency’, the story was criticized for the poor choice of wording some called “creepy” and “worthy of North Korea.”

Creepy headline worthy of North Korea. Jeff Bezos’ Washington Post letting us know all is well— keep taking your Soma, watching Netflix, and ordering from Amazon, because Biden is “showering” us with money! https://t.co/24HJasXw0e

“Jeff Bezos’ Washington Post letting us know all is well— keep taking your Soma, watching Netflix, and ordering from Amazon, because Biden is “showering” us with money!,” quipped Senator Rand Paul’s wife Kelley.

WOO HOO MAKE IT RAIN with a check that still doesn’t cover a whole month’s rent SOAK UP ALL OF THE MONEY SHOWERS MY FELLOW POORS! 🙄 #StimulusCheckhttps://t.co/faRFJxANED

While the majority of Americans have for months been awaiting any direct cash aid, WaPo praised the new relief bill as one of the “most generous expansions of aid to the poor in recent history,” and cited estimates by economists that the bill will boost growth this year “to the highest level in decades” and “reduce the number of Americans living in poverty by a third.”

Somesensed a strong ‘dear leader’ vibe, while others jokingly warned each other not to spend the check, which for many can hardly cover a monthly rent, in one place.