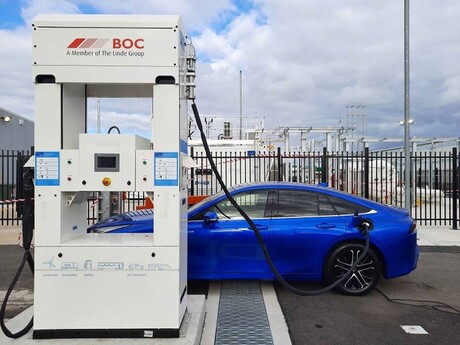 Toyota has opened a new $7.4 million Hydrogen Centre in Altona, Victoria, reported to be the state’s first hydrogen refuelling station.

Installed by gas and engineering company BOC, a subsidiary of Linde, the hydrogen refuelling station will dispense green hydrogen produced through electrolysis powered by onsite solar and battery storage. It is capable of filling a Toyota Mirai hydrogen fuel cell electric car in approximately three minutes, and can also be used to dispense hydrogen to buses and forklifts.

BOC South Pacific Managing Director John Evans said the completion of the Toyota Hydrogen Centre was a significant milestone that would advance hydrogen mobility in Victoria and support Toyota’s ambition for zero emissions from its sites by 2050.

“BOC is proud to be sharing our global technical expertise and delivering world-leading hydrogen refuelling technologies that support Toyota in demonstrating zero-emissions hydrogen that will play an important role in decarbonising transport in Australia,” Evans said.

“This hydrogen refuelling station will help build community confidence and understanding of this emerging fuel, with Toyota playing an important role in educating the public about how hydrogen can play a significant role in transport and the broader energy supply chain.

“BOC is committed to working with industry and government to build hydrogen mobility demand, particularly in metropolitan locations, which will help stimulate more investment in hydrogen production and refuelling stations across Australia.”

BOC and Toyota are founding members of the Australian Hydrogen Council, and are also partnering to facilitate a fleet trial of Toyota hydrogen fuel cell electric vehicles in Western Australia.

HOW TO BE A CLIMATE REALIST – interview with Naomi Seibt