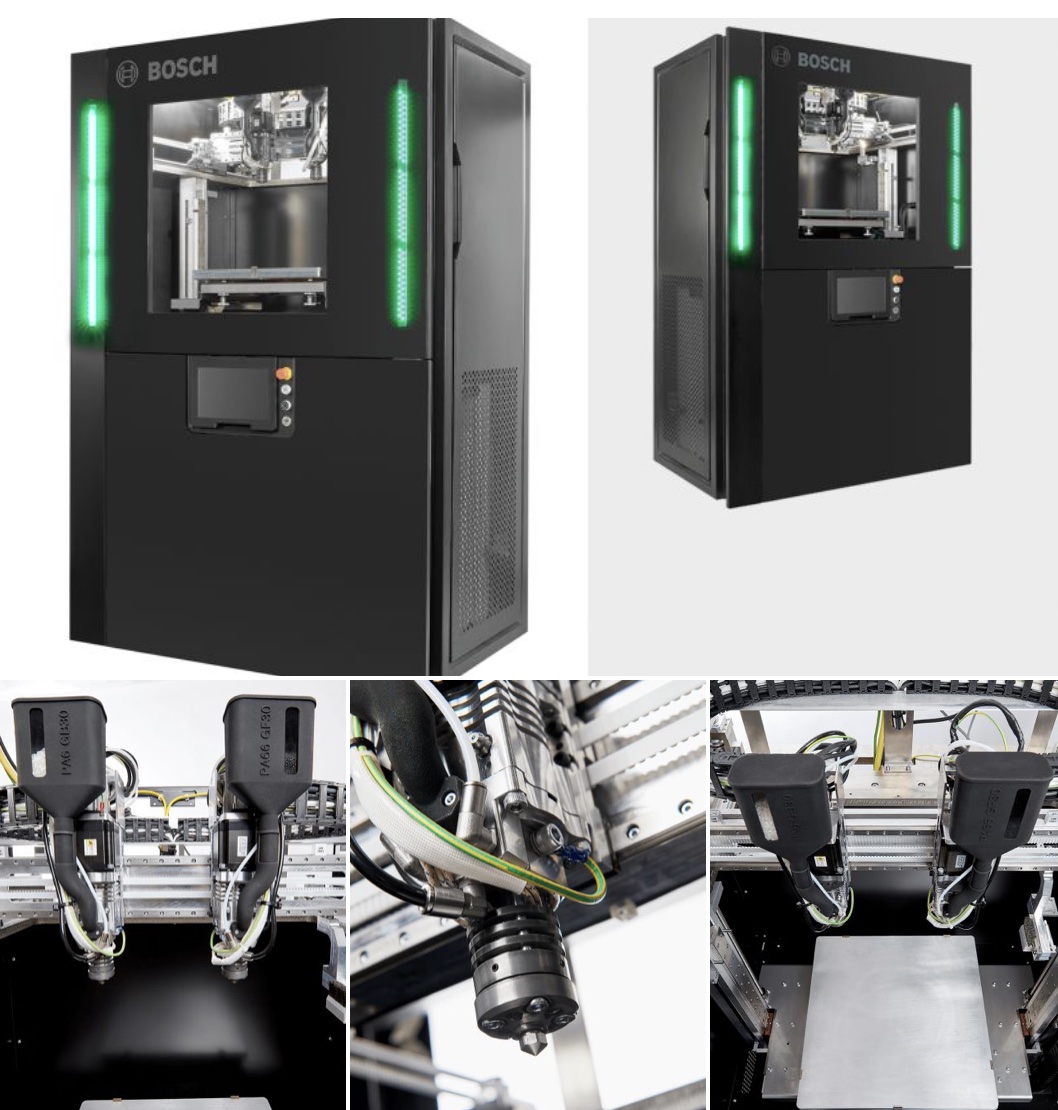 Many companies could have a 3D printing strategy or could benefit from the technology, but Bosch needs to have one. A great deal of firms would have to acquire new skills or people to implement 3D printing. Bosch already has the capability to “build a bear” and cobble together a whole host of 3D printing companies from its existing assets and people.

We’re all aware of this on some level. Indeed, whereas the entry of KraussMaffei, the injection molding firm owned by ChemChina, into the 3D printing market was reasonable and probably not a stretch for the injection molding firm, there was some surprise in some quarters. Bosch’s market entry with a pellet printer was taken in stride. Perhaps, it seemed like it had happened already. It was just that logical. Perhaps also because it wasn’t released officially, but appeared on an employee LinkedIn page? For now Bosch Industrial Additive Manufacturing (IAM) has a minimal viable product (MVP) ready as a kind of discussion piece. A seemingly highly reliable pellet printer weighing over 500 kgs, the system boasts a build volume of 420 x 420 x 420 mm. Currently, the machine has a build speed of eight cm3/h, nozzle sizes of between 0.2 and 1mm, and the ability to print layer heights of up to 0.5mm. It features dual extruders with piston systems, which could mean that they use Axial piston pumps like Rexroth has. However, if we look at the extruder in the video above, it seems like the Bosch IAM team engineered a new one.

Additionally, the dual extruders can deposit different materials simultaneously. Alex Voigt, who put the info on Twitter, mentions the potential to process materials such as “PA66 or PA66 GF35.” That would be refreshing and also kind of hard to do. Additionally, the firm wants to begin with PA12 and PLA. The build platform can be heated up to 120°C and the nozzle temperature can be up to 350°C. This means that PA and similar materials are the target and the team doesn’t want to increase BOM costs by attempting to go for PEEK and other materials at 420°C. Bosch also wants to enable the 3D printing of “common materials,” which should greatly reduce costs.

It is also expressly releasing this MVP printer to initiate feedback, buy-in, and discussion with clients. The company wants customers to suggest materials, sizes, capabilities and provide ideas. Initially, this system would be able to fulfill many orders inside Bosch itself. To me this is a practical tool for producing cheap tooling, jigs, fixtures and all manner of industrial add-ons inexpensively. As I’ve said before, 3D printing is like Duck Tape for your business and this could be an exciting choice for firms to produce improvised parts and more in-house. Coming from a staid firm and relying on granulate, this offering is most directly a threat to Arburg. Bosch´s printers could be faster and cheaper too.

Also, if we look at future progress on this machine, it could be a threat to Ultimaker and entry-level Stratasys printers, as well. While these competitors would be less costly than the Bosch system, the use of pellets would save users much on materials. Coupled with an industrial grinder set up, the Bosch system could also rely on recycled materials, which would bolster use. Generally, for some organizations, one more expensive 3D printer may make more sense than a fleet of desktop 3D printers. It seems like a sensible printer from a sensible company that is well regarded in the manufacturing world.

Bosch at the Center of a 3D Printer Ecosystem

With revenues over $77 billion, Bosch has a diverse range of companies, components and products under the hood. If you know of Bosch, then you might think of it as a company for household goods, such as vacuum cleaners; tools, like electric drills; or automotive components. In fact, the firm also maintains Bosch Rexroth, a large manufacturer of precision motion stages and stepper motors, such those found in 3D printers.

Aside from linear rails and motion control solutions, also used extensively by 3D printers, that unit offers molding technology that could benefit from or even be supplanted by metal printing. Rexroth also has an hydraulics offering that could be fundamentally revolutionized by optimizing parts with 3D printing, as Domin is doing.

Battery and powertrain technologies are a big portion of its business, with Bosch being one of the largest battery suppliers for e-bikes and similar mobility products. These could be very significantly impacted by 3D printing of batteries, drive components, and electric motors. This is exactly what Additive Drives wants to do. As an automotive supplier 3D printing could disrupt the company’s way of doing business or greatly aid it ability to be a partner for electrification.

Its Manufacturing Solutions division manufactures handling equipment, vision, quality assurance (QA) gear, and all manner of tools and factory equipment. That division alone could build the entire post processing, QA, handling automation tool chain that the additive manufacturing (AM) industry would need to make 3D printing significantly cheaper. The company also produces IOT products and is expanding in healthcare, two areas that could see a lot of 3D printing impact. We should also not forget that, through its Dremel subsidiary, Bosch has already been active in the AM market for a number of years by selling a low-cost desktop 3D printer.

Its commitment in low-cost 3D printers seems to be waning though, since its Digilab education and desktop-focused Material Extrusion line is now licensed to 3DPI Tech Solutions. By giving up control of this line of 3D printers, Bosch hints that its commitment to AM is not absolute. However, the firm is better placed than almost any other in the world to be able to make 3D printers in house.

Simultaneously, the company is also uniquely exposed to suffer from or benefit from 3D printing. Its AM research and forays into the business span several technologies and industries, belying a deep commitment to and understanding of 3D printing. Only Ricoh and Siemens may be as equally well placed to enter the market. Only Precision Castparts, Arconic, orthopedics, and space companies could see more exposure to the technology.

The pellet printer is the news item, but what is more important is that Bosch IAM exists. Bosch IAM aims to offer “original solutions for industrial manufacturing – based on an innovative business model (including self-developed software technology) with which we aim to merge the advantages of 3D printing with already established manufacturing processes. We are convinced: Manufacturing is far from finished. Time to rethink things.”

It is notable that the unit is also developing its own software. With 12 employees on LinkedIn running the gamut from software to hardware, it seems like a young, lean, and fun part of the engineering giant. The startup has frontend developers, tattoos, piercings, all sorts of informality, and, now, separation from Bosch’s incubation platform, Grow.

Pellet printers were long rumored to be of interest to the firm. Indeed, it has been working on this system since at least 2019 and  developing other 3D printers since at least 2017. Refreshingly, IAM´s CEO is a tool designer, Hendrik Jahnle, which should mean deep experience in what customers need. So, what is the company building?

If it works well, then this could be a growing business for Bosch that could really eat into Stratasys’s market in the long run. Open and 20 times cheaper per kilo, this could be a very popular machine, if they get it right.