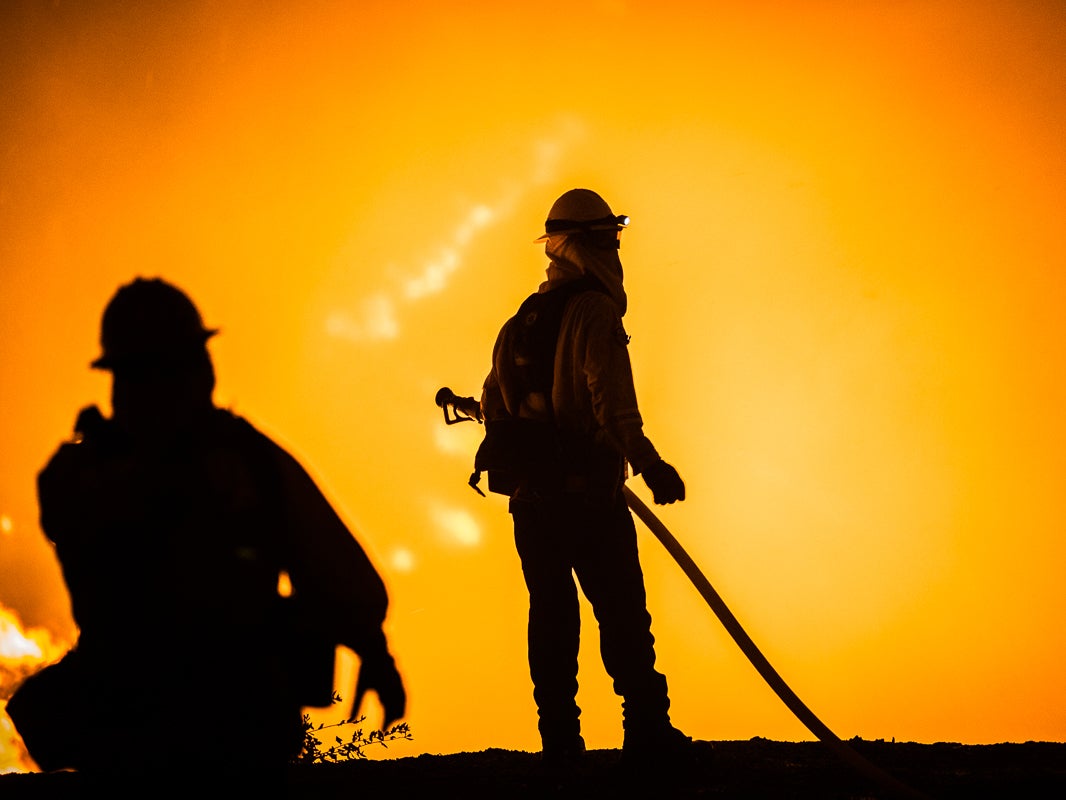 Out of control wildfires spreading over an area of more than 15,000 acres have prompted almost 8,000 people to evacuate their homes in Riverside County in southern California, amid a searing a heatwave in the region.

The fire, named the Apple Fire by local firefighters, who routinely give blazes identifying titles, was reported on Friday in Cherry valley, which is about 75 miles east of Los Angeles.

One family home and two outbuildings have been destroyed.

Sharing the full story, not just the headlines

Local fire department spokesman Rob Roseen told reporters evacuation centres have been set up at local hotels and at a secondary school.


All the temporary evacuation centres will enforce Coronavirus measures such as temperature screenings upon entry, and enforce social distancing and the use of masks, Mr Roseen said according to CNN.

Photographs shared by the Riverside County fire department on Twitter on Saturday showed thick plumes of smoke filling the sky over the mountainous region.

Residents of 2,586 homes, totalling around 7,800 people, had been told to evacuate, the department said.

The fire had grown from 700 acres on Friday evening to 4,125 acres by Saturday evening and to more than 15,000 acres by Sunday morning.

It remains 0 per cent contained, according to the County fire department and the California Department of Forestry and Fire Protection.

The fires come amid what the National Weather Service described as a “deadly heatwave”, with an “excessive heat warning” issued for parts of Arizona, Nevada and California, including Las Vegas and Phoenix.

On Friday, temperatures broke records in some areas, reaching 46C in Phoenix, 50C in Palm Springs and 51.6 (125F) in Death Valley in California.

The heatwave is the product of an area of high pressure moving through the southwest US.

Officials warned the heatwave, dry weather and light winds were likely to exacerbate the fires.

No injuries have been reported.

'Now is not the time': Brisbane protesters 'will be arrested' at refugee rally

19 – Some 23.8 Million More Children Will Drop out of School — Global Issues

At least 14 dead as Indian Covid-19 repatriation flight crashes on landing, breaks in 2

'Now is not the time': Brisbane protesters 'will be arrested' at refugee rally

19 – Some 23.8 Million More Children Will Drop out of School — Global Issues

Asian States Play the Murder Card; Is the War Card Next?