CDC passes the point where malfeasance can be mistaken for incompetence 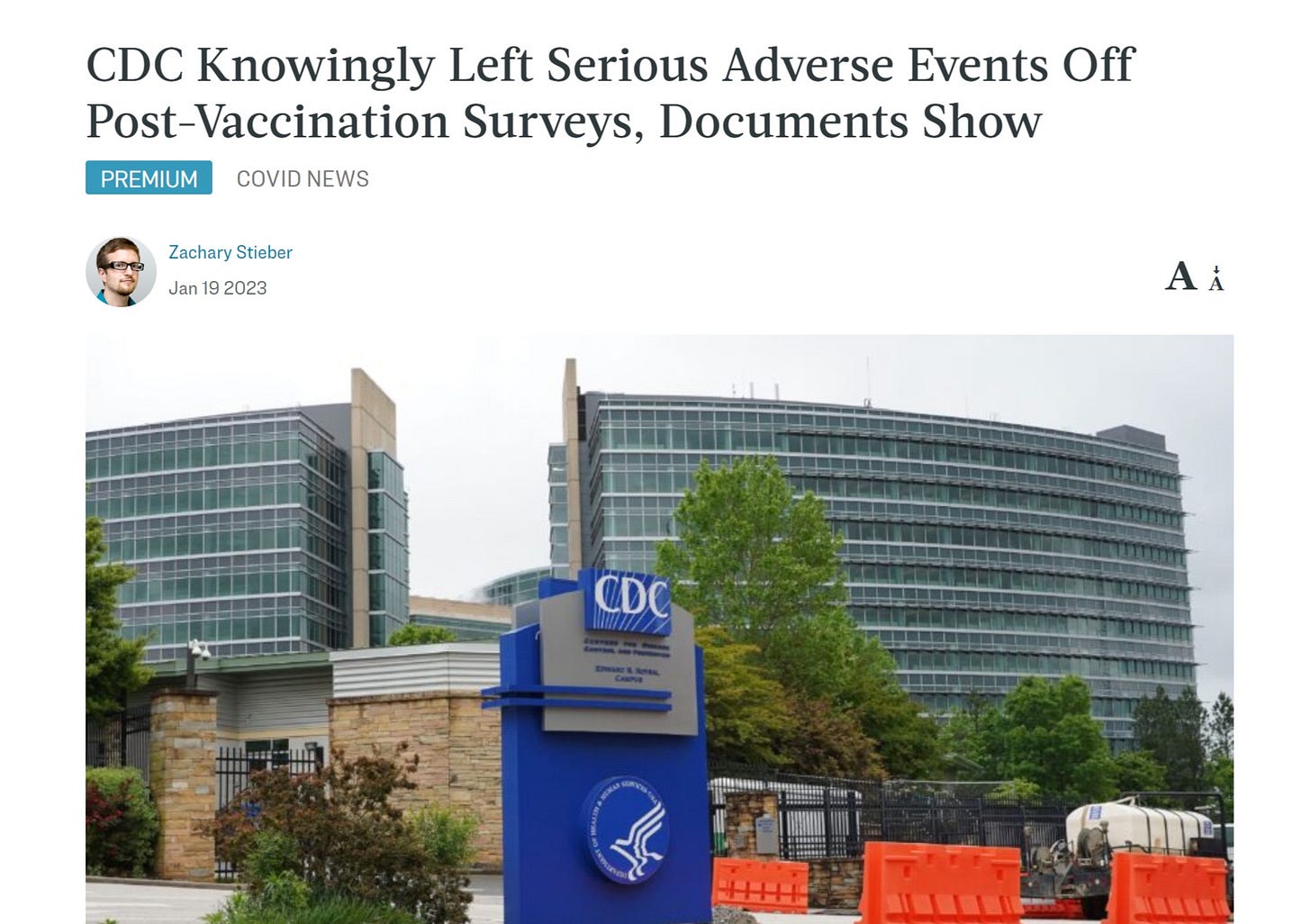 my base prior when assessing government agencies is always “incompetence.” it’s usually the simplest and most parsimonious explanation. but there is a point beyond which the actions become so obviously reckless, slanted, and clear in their intent that “we’re just no good at this” fails as plausible cause and occam’s razor reverses and must now cut toward “this was deliberate malfeasance.”

if there was any doubt remaining, i think it has now been erased. the CDC is WAY over that line.

we have some great reporting here from zachary stieber at epoch times:

the CDC has a system called V-safe that is used to follow up on post vaccination side effects. it was smart phone based and ~10 million people signed up.

in theory, this should have created a sound system to measure adverse outcomes.

in practice it was yet another game of “hide the ball.”

and this time, there are serious receipts.

the CDC full on knew about issues like myocarditis, strokes, and death.

they included them as “outcomes of special interest” in the draft protocols for V-safe.

then, before it went live, they took them all out.

The U.S. Centers for Disease Control and Prevention (CDC) didn’t include serious adverse events like heart inflammation on post-vaccination surveys even though the agency knew the issues could be linked to COVID-19 vaccines, documents show.

Even before the surveys were rolled out in December 2020 after the first vaccines were authorized, the CDC knew that myocarditis—a form of heart inflammation since confirmed as being caused by the Pfizer and Moderna shots—and other serious adverse events were of “special interest” when it came to the vaccines, according to a newly disclosed version of the protocol for the survey system.

The Nov. 19, 2020, protocol (pdf) for V-safe, the survey system, lists myocarditis, stroke, death, and a dozen “prespecified medical conditions.” The protocol was obtained by the Informed Consent Action Network (ICAN), a nonprofit that seeks transparency around health information. All of the conditions can cause severe symptoms.

V-safe is a system of surveys that was introduced during the COVID-19 pandemic to monitor vaccine safety. It was developed and is managed by the CDC.

Updated versions of the protocol list the same 15 adverse events.

None of the conditions were included in the actual surveys.

Respondents could check boxes if they experienced certain symptoms, but only 10 lower-level problems such as fever and nausea were listed as options.

they knew exactly what they needed to be looking for and they removed it from the survey so that they would not find it.

they moved it to an “added free text” section that makes aggregation and database analysis basically impossible.

this is not the first time game like this have been played. something similar occurred where many medical records have “vaccinated” in the free text field instead of something countable/aggregatable. the CDC has used this to attribute bad outcomes from those actually vaxxed to the unvaxxed

they also wound up having to admit, again under FOIA, that they were not even tracking adverse events in the VAERS database (per their own mandate to do so).

how do you miss the most blatant safety signal in vaccine history?

what’s worse than not having a helmet when playing football? thinking you have one when you don’t. it’s the worst of all worlds: the illusion of safety where there is none. you are trusting in protect…

even the meagre data collected was so bad that the CDC fought not to release it raw. when they finally lost, we got this:

The CDC has described the results of V-safe in multiple studies, but refused to release the raw data until ICAN brought litigation against it. Data released to ICAN in October 2022 showed that more than 3.2 million people sought medical attention or missed school, work, or other normal activities following vaccination.

The CDC posted some of the v-safe data on Dec. 1, 2022, several months after a self-imposed deadline passed.

keep in mind that that’s out of 10 million who signed up. that’s a ~32% AE rate for “needed medical attention or could not perform normal activities.”

but all the truly worrying stuff is buried in the free form comments. and these were, wait for it….

i am sure you’re shocked…

V-safe users could report the serious adverse events, but only if they wrote them out in a free-text field.

The prompt was, “Any other symptoms or health conditions you want to report.”

The CDC has resisted releasing the results from the field, insisting that it would be too onerous to review the 6.8 million entries for personally identifiable information (PII), according to a joint status report made to the court in November 2022.

The agency declined a request from ICAN to provide a random sample of a few hundred entries, which plaintiffs say would back their argument that the entries likely hold little or no PII such as names and addresses.

The entries are important because they would show how many respondents reported experiencing the prespecified adverse events like heart inflammation.

The CDC instead offered to review all the entries and convert them into medical codes, according to the filing.

“It was apparently willing to do this because, even though it would have been more time consuming and complex then simply reviewing for PII, this approach would permit the CDC to hide from the public most of what is actually written in the free-text fields,” ICAN said in the document.

there is no plausible way that was an accident and trusting the CDC who has been caught playing games and suppressing signals at every turn to put this text into codes for others to assess is a flatly preposterous idea.

they retain zero credibility as an honest broker on these issues and should be forensically investigated stem to stern and perhaps proctologically.

the days of “fox commission to assess evidence on the henhouse murders” must come to an end.

it’s clear where THAT road leads.

someone made a choice to dump a list of 15 known severe adverse events that had been in the early V-safe protocols and avoid gathering easy to use information on the matter.

this was deliberate and presumably purposeful.

the question of “who made this decision and at whose behest?” looms large.

this warrants SERIOUS forensic investigation under oath and penalty of perjury.

public health does not get to play hide the ball with the public.

so let’s find out exactly what happened here and why and then let’s have good hard think about the future of these organizations and whether we need them at all.

In the future, there will be…