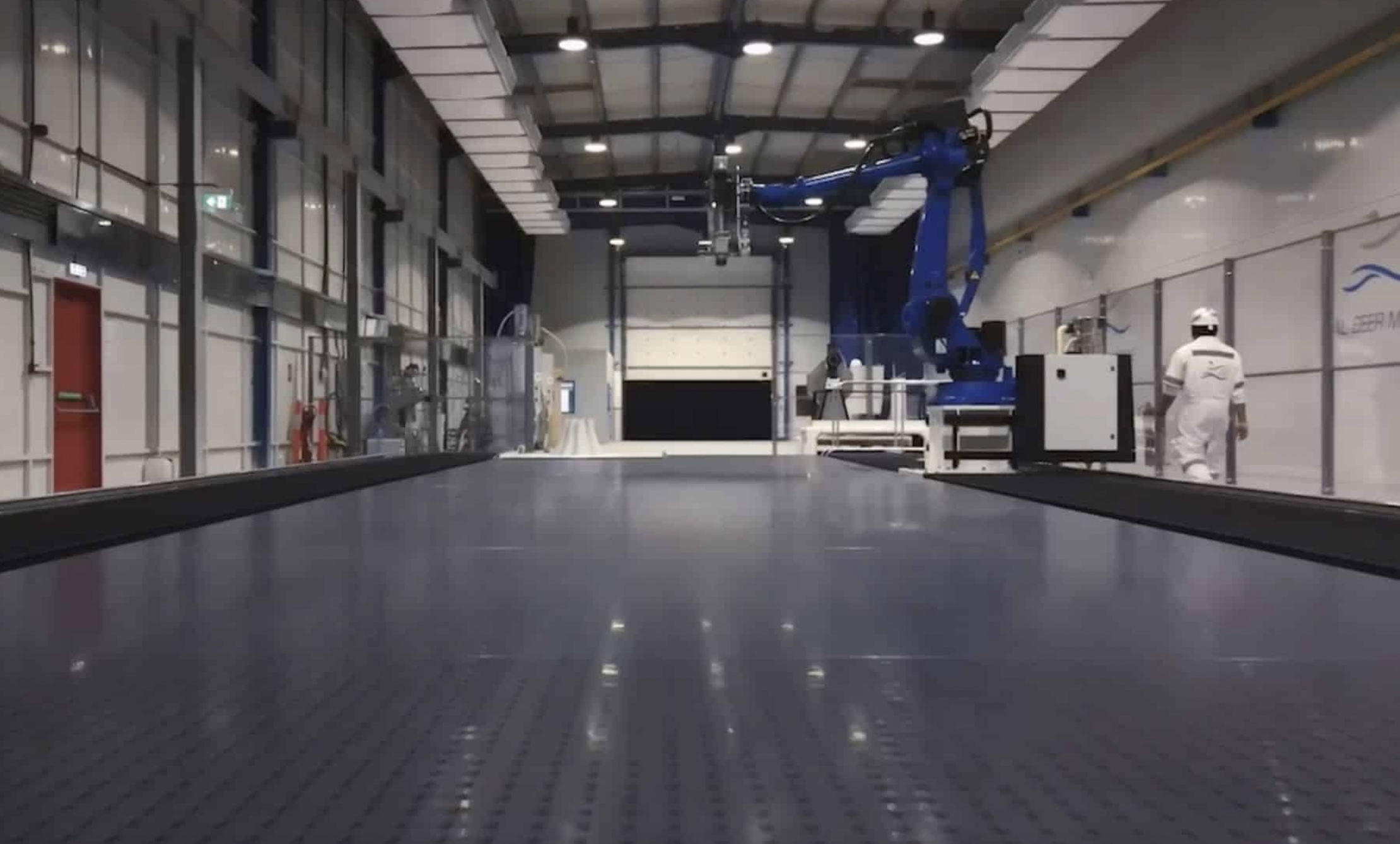 CEAD, a Dutch original equipment manufacturer dedicated to large-format 3D printers, has unveiled what it claims to be the world’s largest robotic arm-based 3D printer. At 36 meters long and five meters wide, CEAD’s latest composite 3D printer would seem to be bigger than most other robotic 3D printing systems we’ve come across.

In July of last year, it was reported that the customer was Al Seer, who specifically commissioned the machine. The Mega II 3D printer has two robot arms on rails and performs pellet extrusion. It can therefore be used to make entire boat hulls, large scale structures, formwork, housing, wings, other aircraft components and more. Using various short carbon and glass fiber pellets, the printer can produce structures with relatively low warp in an open build environment.

Based in Abu Dhabi, Al Seer Marine performs refits, builds boats, manages yachts, manufactures unmanned sea drones and more. The publicly traded company has over 1200 employees. Al Seer is a part of a remarkable firm called International Holding Company. This Financial Times article explains how it was plucked from obscurity to become valued at $240 billion. The company hopes to have revenues of over $272 billion in five years. The scale of this company’s ambition is nearly unparalleled. The revenue target would mean that International Holding would at the scale of Toyota, Google parent Alphabet and Shell. The firm’s current valuation already puts it as the second biggest in the region. The company invests in food, real estate and construction and is gaining a global footprint. Al Seer, then, is nothing short of a diversification play for a small but wealthy city state into a post-oil economic powerhouse. International Holding Company is chaired by Sheikh Tahnoon bin Zayed al-Nahyan, who is not only a full brother to the ruler of Abu Dhabi but also the national security chief of the country.

International Holding Company’s chairman may explain the Al Seer’s interest in the large scale system. The UAE has bet big on 3D printing, with Dubai investing considerably in 3D printing for construction. More demure Abu Dhabi has made few overtures to the 3D printing industry. However, a national goal of becoming important in additive manufacturing overlaps with the defense needs of the country. The UAE is an internationally known trading center that is a locus for financial, tourist and other economic activity for the region. With less than 10 million in population, it has the 34th biggest GDP and 6th highest GDP per capita.

Long-known for its pearl fishing and instantaneously wealthy citizens, the richest but not the most ostentatious of the emirates has seen a remarkable transformation across the decades. Shipping and trade are sectors that have existed in Abu Dhabi for a long time. The building of traditional ships was also very important for trade and fishing, so it is fitting that Al Seer wants to turn the city into a hub for large scale 3D printing and boat building.

3D Printing May Be Key to UAE Defense

With a lot of money now Abu Dhabi and its sister emirates face an uncertain tomorrow. Relations with Israel seem good, but a spat between Saudi Arabia and Qatar exposed rifts in erstwhile united gulf states. There is also the looming influence and disruptive behavior of Iran, which is a partner and a rival to the UAE, but more so a force perennially in conflict with UAE ally Saudi Arabia for dominance over the region. With electric automobiles and an America looking to Asia for new allies, there is limited time for the UAE to achieve geopolitical influence, stability and continual wealth.

Another source of instability is the now largely forgotten civil war in Yemen. Although the Emiratis reportedly acquitted themselves well, it painted a bleak picture for their military prowess generally. Yemen is a civil war that has now been going on since 2014. Most countries in the region at one point were fighting on one side to end the conflict, but it has persisted. Even for a country as wealthy as the UAE, weapons systems are expensive. Across a narrow straight of water, Iran harasses U.S. naval ships with small polymer speedboats. In the 2019 Abqaiq attack, simple Iranian drones took out a significant portion of Saudi Arabia’s refining capacity. The interest in drones for the UAE defense establishment must be very high. Throw in volatile groups in Lebanon, Yemen ,and Syria and the country is looking for a solution. The UAE can buy weapons but recent restrictions in arm use by Switzerland and other technology export bans mean that one can not be assured that the country can use its weaponry whenever it wants. This may include significant purchases of Patriot and THAAD air defenses, as well as missile and air defense systems from South Korea and Israel.

If the UAE would like to protect itself, especially its all important coastline, the simplest thing it could do is to build autonomous or semi-autonomous surface vessels. We previously looked in 2021 at why governments are interested in 3D printing boat hulls. The rapid local production of surface vessels that could protect oil and shipping infrastructure must be a priority for the UAE and Dubai. Large-scale 3D printing is the best way that they can produce these vessels at scale locally. With Al Seer already doing work in unmanned surface vessels, and the chairman also being the national security advisor,  its quite logical to assume that this is the main reason for this large 3D printer is autonomous surface vessels to patrol and protect the UAE´s coastline and infrastructure.