Climate Change & Global Warming Are Natural, Not A Result of CO2 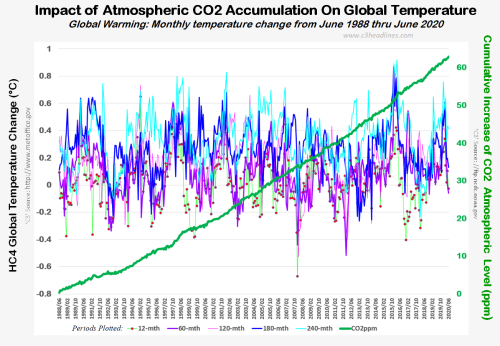 Out of touch, and well outside the boundaries of the U.S. mainstream moderate electorate, Democrat Joe Biden and his fringe left colleagues have been declaring that the world – as we know it – is soon going to end due to a global warming and a resulting climate change apocalypse.

But is that a reasonable, rational pro-science expectation?

Instead of focusing on the major reason of a natural rebound progression of global warming since the Little Ice Age, the anti-growth, anti-prosperity Democrats point to the smaller human related impact: fossil fuel emissions (CO2) from modern industrial/consumer activities.

It was from that Congressional testimony that the doomsday prophecies of unprecedented global temperature change from CO2 became the lodestone of the party’s faithful.

So, how good have those doomsday global warming change prophecies been since June 1988 (32 years ago)? In a one-word summation: lousy.

That tiny difference certainly confirms that over the past 30 years there has not been an extreme impact on longer-term temperature change despite some 850 billion tonnes of CO2 being emitted into the atmosphere since 1988.

And the chart absolutely reflects an up/down pattern of temperature change for all periodicities, but clearly it does not demonstrate any significant relationship to the very substantial, monotonous linear growth of CO2 levels.

To clear the clutter of multiple curves crisscrossing each other on the first chart, this next chart depicts the 36-month average (3-year average) of each temperature change curve found on the prior graph. 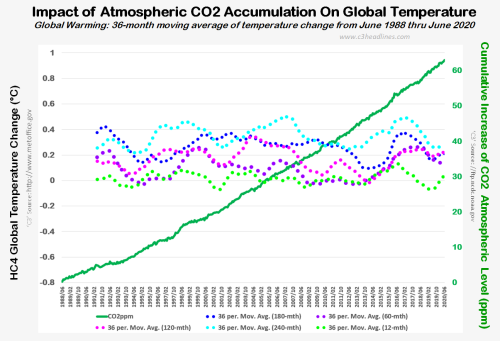 These plots also confirm an up/down pattern for all periodicities, plus confirms an absence of relation between the atmospheric CO2 level linear growth and temperature change.

Based on this empirical evidence of rather stable cyclical temperature change, plus the evidence from the prior article that global warming acceleration/deceleration also follows a cyclical pattern, it can be fairly surmised that human CO2 emissions are having little, if any, climate significant impact on global temperatures.

Although NASA’s top climate scientist in 1988 predicted climate disaster was upon us due to intense global warming from CO2, after 30+ years it’s time to admit he was wrong and it’s time for the Democrats to stop pushing this anti-science, anti-prosperity, doomsday propaganda.

As usual in climate science, it’s just another case of those stubborn facts that are so inconvenient.