Climate Just Happens & Is Not An Existential Threat 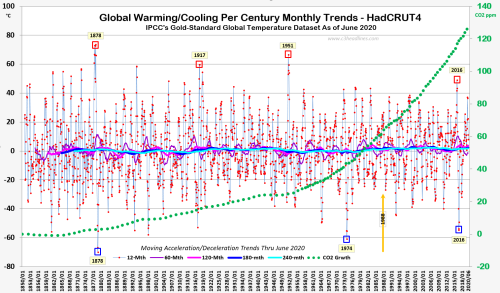 The Trump administration remains steadfast in its reliance on the actual climate scientific evidence that refutes Biden’s hyperbole of climate doomsday and anti-science prophecies that plague the left-wing Democrats.

As the adjacent chart reveals, the empirical evidence is irrefutable: global warming trends indicate a ‘situation normal’ as the global climate continues to have spurts of accelerate warming and deceleration towards rapid cooling.

In contrast to Trump, Biden – and his Democrat cult of doomsday soothsayers – completely mislead the public with claims of global devastation within the next 9 to 12 years from civilization’s continuing fossil fuel emissions due to  energy production.

Climate doomsday is not an empirically-based claim but an irrational belief without data.

This charts plots the monthly observed warming/cooling trends – i.e. data – and the cumulative growth of the atmospheric CO2 levels (see green dots) since 1850.

Just another case of those stubborn facts.