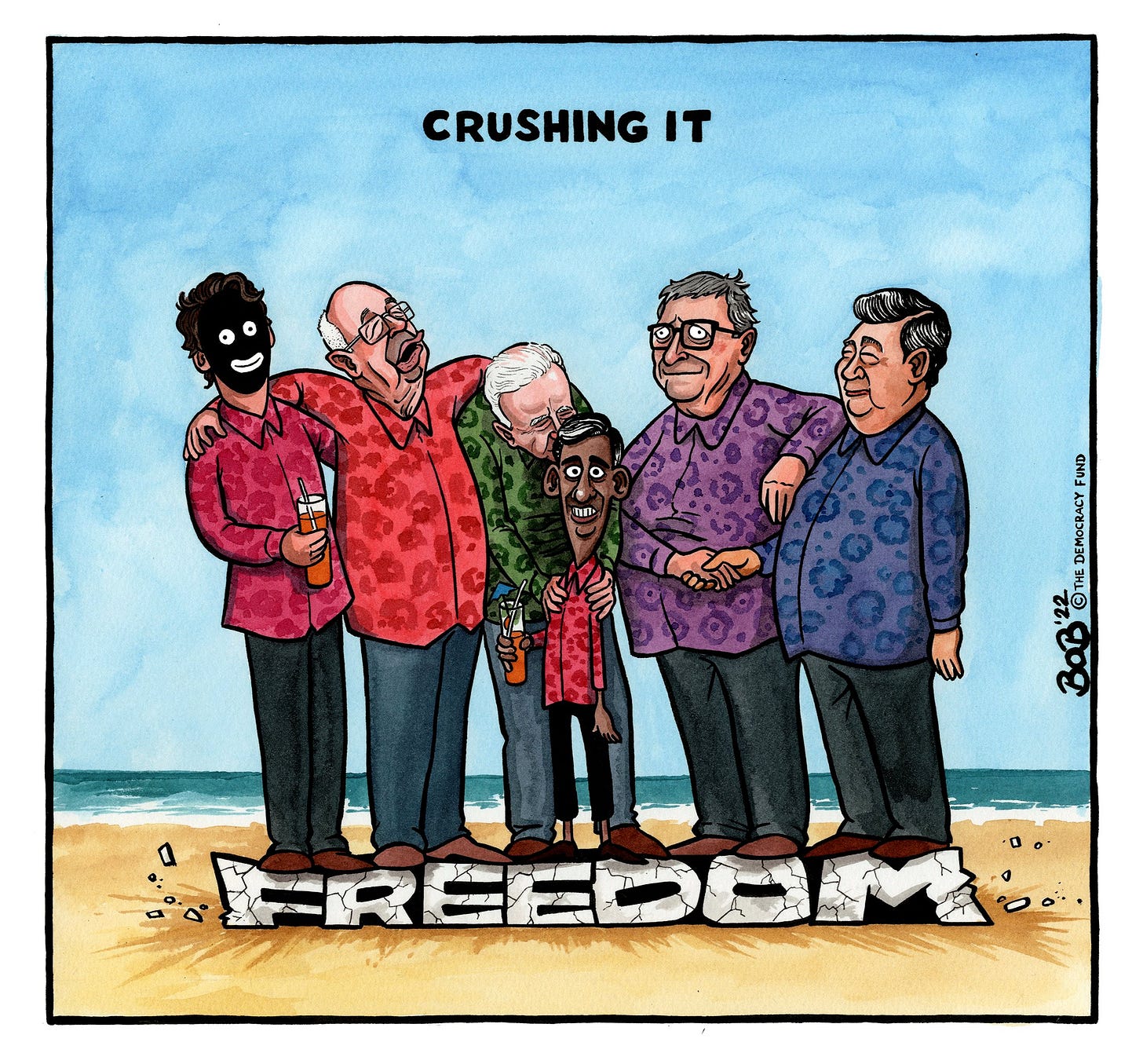 I certainly hope that initiatives like this are launched here in the UK and elsewhere around the world. We absolutely must stop their totalitarian mission to enslave those of us who remain.

Rep. Warren Davidson (R-OH) is urging Congress to pass a bill he introduced last year that would ban the use of vaccine passports for future use.

The bill is aimed at protecting Americans from the federal government’s overreach under the guise of responding to the pandemic.

We obtained a copy of the bill for you here.

The bill, called the Vaccine Passport Prevention Act, would, with a few exceptions, prevent the federal, state, and local governments, as well as private entities, from forcing Americans to provide proof of vaccination to access goods and services, and to continue working.

If passed, the legislation would allow people to sue their employers and governments for requiring proof of vaccination against the coronavirus.

The bill would only allow exemptions for schools, medical facilities, and enlisted service members. However, schools would be required to allow vaccination exemptions for medical, religious, and conscience reasons. Medical reasons would include naturally acquired immunity.

“The point of this bill is simple,” said Davidson during the bill’s introduction. “I’m committed to defending freedom. Freedom surrendered is rarely reclaimed, so now is the time to act. Americans have a right to keep their medical decisions private.

“Neither businesses nor governments should compel access to confidential information as a condition of restoring our way of life. Discrimination that separates healthy people from other healthy people based on vaccine status is unconstitutional. Throughout the pandemic, we’ve seen states deny Americans a republican form of government in the name of public health. Now that the pandemic is over, they are trying to maintain power. Banning vaccine passports has become sadly necessary to thwart these naked power grabs seeking to enable even more control for big government and big business over the lives of individual Americans.”

I could have sworn that I previously reblogged this important piece by James Roguski but apparently I just shared it by email. Better late than never as they say. Please read.

The “G20 Bali Leaders’ Declaration” exposed the “secret” that I have been trying to warn the world about for months.

THE PROBLEM IS ACTUALLY MUCH BIGGER THAN MOST PEOPLE THINK.

The videos below are mostly true, but also partly inaccurate.

Please read this article in order to better understand the enormous dangers that we will all be facing in the very near future.

NOTHING was enacted into law during the G20 event in Bali.

What did happen was the “leaders” let the cat out of the bag regarding their intentions to amend the International Health Regulations in an attempt to create a global “digital health certificate”.

They also let the cat out of the bag in stating that they want to enact these changes this upcoming May (2023), rather than in May 2024 like they have officially been saying for most of the year.

This was a blessing because it woke some people up.

NOW, people may start to pay attention to the secret negotiations that have been going on to amend the International Health Regulations.

We acknowledge the importance of shared technical standards and verification methods, under the framework of the IHR (2005), to facilitate seamless international travel, interoperability, and recognizing digital solutions and non-digital solutions, including proof of vaccinations. We support continued international dialogue and collaboration on the establishment of trusted global digital health networks as part of the efforts to strengthen prevention and response to future pandemics, that should capitalize and build on the success of the existing standards and digital COVID-19 certificates.

The wording of the G20 Bali Leaders’ Declaration does NOT mean that vaccine passports were “signed into law.”

Here is what it does mean:

The G20 “leaders” know very well that the World Health Organization is secretly negotiating amendments to the International Health Regulations (IHR). They also know that the IHR don’t really have anything to do with health.

The reality is actually much worse:

THE PROBLEM IS ACTUALLY MUCH BIGGER THAN MOST PEOPLE THINK.

As reported previously, nations around the world have secretly submitted proposals to amend numerous articles in the International Health Regulations.

I STRONGLY ENCOURAGE EVERYONE to pay attention to the secret negotiations that are being conducted by the WHO regarding the amendments to the International Health Regulations.

Please watch the videos below…

On November 14-15, 2022, the Working Group for Amendments to the International Health Regulations (WGIHR) held their first secret meeting to discuss the proposed amendments.

On November 16-17, 2022, the International Health Regulations Review Committee (IHRRC) met in their third set of secret meetings to discuss the proposed amendments.

I have personally filed Freedom of Information Act (FOIA) requests to obtain the amendments that have been proposed by nations around the world. So far, my requests for information have not been fulfilled.

Other people in Australia, Canada, Finland, New Zealand, South Africa, and the United Kingdom have also filed official requests for information. We have sent email requests directly to the information department of the WHO, and all of our requests have been ignored.

We do know that the following nations have submitted proposed amendments to the International Health Regulations.

CLEARLY, WE, THE PEOPLE OF THE WORLD, DO NOT WANT A UNIVERSAL, GLOBAL, INTEROPERABLE DIGITAL HEALTH CERTIFICATE (VACCINE PASSPORT).

Download and read the latest version of The People’s Amendments to the International Health Regulations. Please feel free to suggest your ideas, changes and suggestions in the comment section below this article.

Tell the world what you do want:

This is the 44th article in this series.

The old system is crumbling, and we must build its replacement quickly.

If you are fed up with the government, hospital, medical, pharmaceutical, media, industrial complex and would like to help build a holistic alternative to the WHO, then feel free to contact me directly anytime.

All support is deeply appreciated.