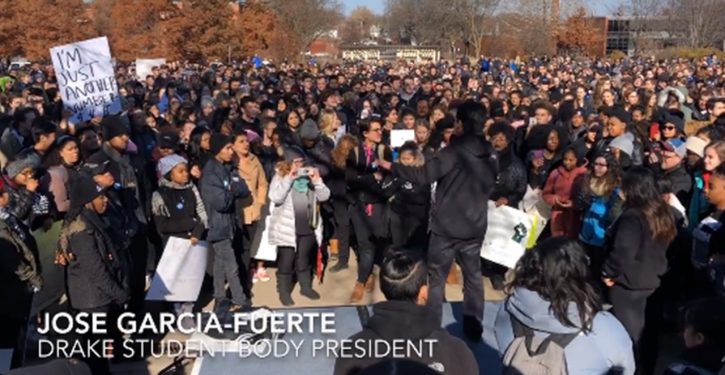 A freshman diversity workshop at Drake University intended to “raise awareness about issues like racism and sexism”  left students, both minority and white, “uncomfortable” and even “traumatized,” reports the College Fix.

Drake hired the organization High Impact Training for its “You. Me. We.” program, which seeks to highlight “the often-unintentional ugliness of prejudice, setting the stage for a lively discussion of diversity.”

But Drake’s Associate Provost admitted that despite being “thoroughly vetted,” High Impact Training’s skit format was too “aggressive” and a “huge problem.”

“A sense of belonging for students of color—whose well-being matters deeply to me and other members of the team who planned Welcome Week—was instead thrown into jeopardy,” said Associate Provost for Campus Equity and Inclusion Jennifer Harvey.

As the College Fix notes, “The trainers stayed ‘in character’” — being rude — “even after their skits were completed. Although it was apparently made clear at the onset this would be the case (and says so on the group’s website), not all students were aware of it during (post-skit) question-and-answer sessions.”

And some who were aware did not appreciate it anyway:

One student said “I do understand that [the trainers] were in character, but the way that they went about answering some of these questions was kind of just blatantly rude.” Another said he “understood what they were attempting to do, but it was offensive.”

According to the Times-Delphic:

[Freshman Ryan] Sherman said many first-year students were already uncomfortable and on edge after the skits, and those feelings only increased during the Q&A portion of the event.

“Giving a microphone to the students didn’t really do anything. Because everybody was so riled up, it quickly became a shouting match from across the auditorium between a lot of different people at once,” Sherman said. “That room quickly became filled with hate and division, much quicker than I’ve ever seen a room filled before.”

In response to students’ feedback, Harvey held a listening session with first-years on Saturday to talk about the workshop sessions and the harm that was caused.

“It would be impossible for me to sort of overstate how much grief I have about that, because I know the harm is real,” Harvey said. “And I also know it sets back many things we have done to really grow meaningful DEI [diversity, equity and inclusion] work on this campus.” …

“We are just as responsible for the harm that was caused and we intend to continue to be accountable for that. And we understand that intent and impact are not the same thing, that impact is what matters in this case,” Harvey said. “On behalf of my office, I’m sorry, because my office was a co-sponsor.

Harvey, a professor of religion and author of “Raising White Kids: Bringing Up Children in Racially Unjust America,” said any student negatively “impacted” by the training should go to the Drake counseling center.

In the past Harvey has claimed that raising children with a “colorblind” philosophy is “based on th[e] idea that there’s something wrong with difference” and “something wrong or bad with color.” In 2017 she authored a New York Times op-ed in which she noted her daughter had asked why, if George Washington owned slaves, do Americans revere him. “Good question,” Harvey said in response.

Diversity training in general doesn’t work, according to a 2012 article in Psychology Today. In it, Peter Bregman notes, “Diversity training doesn’t extinguish prejudice. It promotes it,” by dividing people into categories and promoting a belief in inherent differences; “Categories are dehumanizing. They simplify the complexity of a human being. So focusing people on the categories increases their prejudice.” Indeed, “researchers — Frank Dobbin of Harvard, Alexandra Kalev of Berkeley, and Erin Kelly of the University of Minnesota — concluded that ‘In firms where [diversity] training is mandatory…training actually has negative effects on management diversity.” Similarly, in 2007, Time magazine ran a story titled, “Employee Diversity Training Doesn’t Work.”