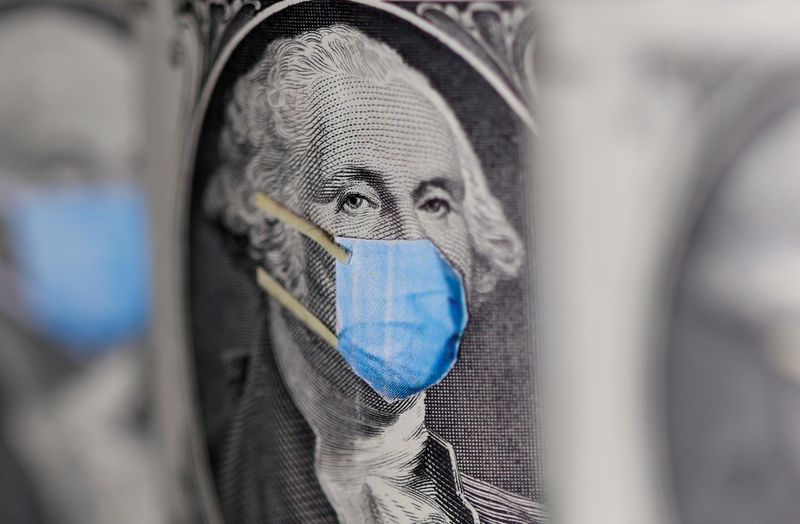 FILE PHOTO: George Washington is seen with printed medical mask on the one Dollar banknote in this illustration taken, March 31, 2020. REUTERS/Dado Ruvic/Illustration/

TOKYO (Reuters) – The dollar held onto gains against most currencies on Wednesday after Republican U.S. President Donald Trump’s abrupt cancelling of talks on economic stimulus with Democrats increased risk aversion.

Currencies had only just regained a sense of calm after Trump returned to the White House from hospital, where he received treatment for the coronavirus.

Trump’s surprise decision to call off stimulus talks until after the Nov. 3 presidential election increases downside risks for an already shaky U.S. economy, which is likely to favour safe harbour flows into the dollar.

“The reaction is a type of risk-off trade to buy the dollar and the yen against other currencies,” said Masafumi Yamamoto, chief currency strategist at Mizuho Securities.

The British pound <GBP=D3> was quoted at $1.2869 after skidding by 0.86% on Tuesday as optimism about Britain’s trade negotiations with the European Union failed to shield sterling from the dollar’s advance.

Trump, still being treated for COVID-19, on Tuesday turned to Twitter to break off talks with Democrats on an aid package even though U.S. virus cases are rising, which poses a serious threat to the economic outlook.

Highlighting the peril, Federal Reserve Chair Jerome Powell on Tuesday warned that the U.S. economy could slip into a downward spiral if the coronavirus is not effectively controlled and called for more economic assistance.

Traders will look to minutes from the Fed’s most recent meeting and comments from several Fed speakers for further signs of how central bankers view the outlook.

The increased risk aversion, however, did not move the dollar against the yen, which was last quoted at 105.64 <JPY=D3>, because both currencies tend to be bought during times of uncertainty, analysts say.

Trump has only just returned to work on Monday after three nights in hospital following his bombshell admission last week that he had contracted the coronavirus.

Medical professionals have said Trump’s early discharge from hospital puts others at risk of infection, and its spread among his most senior staff is swinging public opinion against him.

Support for his Democratic rival Joe Biden has grown by about four percentage points since mid-September, according to Reuters/Ipsos polling from Oct. 2 to 6, with 52% of likely voters backing Biden compared to 40% for Trump.

Investors are starting to warm up to the idea of Biden winning the election, which is a positive for the dollar, Mizuho’s Yamamoto said.

The Australian dollar <AUD=D3> steadied at $0.7106 in early Asian trade after tumbling by more than 1% on Tuesday. Traders say the Aussie faces more downside risks due to expectations that the Reserve Bank of Australia’s next move is to cut rates.

Nothing to Learn from East Asia? — Global Issues

Wow. Even I'm Blown Away by This One – and that don't Happen Often!

Nothing to Learn from East Asia? — Global Issues