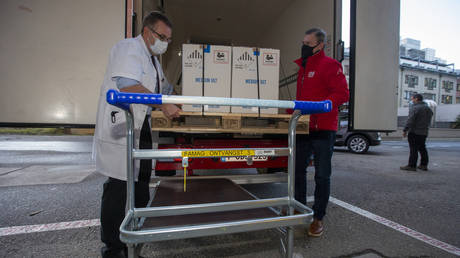 The EU is set to introduce a rule requiring drug manufacturers to register exports of their Covid-19 vaccines to third parties, after AstraZeneca warned supply issues will impact its ability to meet demand.

The new measure, reportedly due to be implemented by the European Commission in the coming days, will create a ‘transparency register’ for pharmaceutical companies who export their drugs outside of the bloc, in an attempt to reduce the risk of supply chain problems impacting the vaccine rollout.

Discussing the plan, German Health Minister Jens Spahn argued that the EU “must be able to know whether and what vaccines are being exported.”

An obligation to get approval for vaccine exports on the EU level makes sense.

The EU move follows an announcement from AstraZeneca that the company will reduce deliveries of its Covid-19 vaccine by 60 percent in the first quarter of 2021, significantly lowering the 80 million doses that were expected by the bloc before the end of March. The jab has yet to be approved for use by EU regulators but is expected to be greenlit by the end of this month.

AstraZeneca blamed the reduction on “production problems” at its manufacturing plant in Belgium. In response, the European commissioner for health and safety, Stella Kyriakides, criticized the company on Twitter, explaining that a “precise delivery schedule” was key for member states being able to plan their vaccination programs.

European Commission President Ursula von der Leyen held talks with company officials on Monday in a bid to find a way for AstraZeneca to increase its vaccine production and meet its current delivery goals.

While the EU is implementing the export registrations measure, it is currently unclear whether it will address the AstraZeneca supply issues, or if the bloc will introduce further rules that limit exports to third countries to ensure the rollout across Europe proceeds uninterrupted.

AstraZeneca isn’t the only Covid vaccine maker suffering supply chain issues. Pfizer has warned that it might not be able to meet worldwide demand as it scales up production for the jab it developed jointly with BioNTech. It also noted that in the short term it will only be able to provide information about its global production level “on a weekly basis.”

Teaching a machine how to identify imperfections in 2-D materials