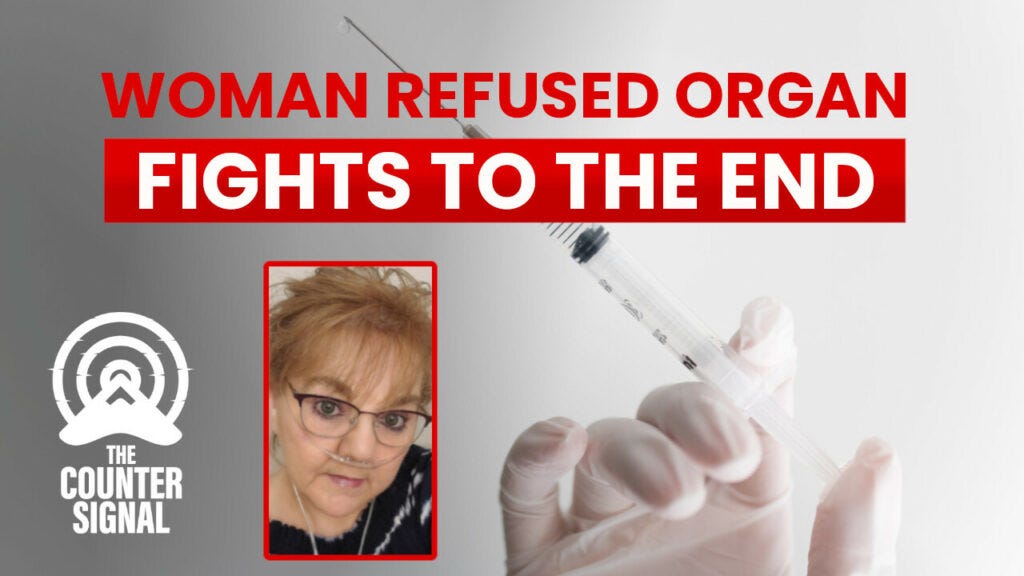 This is certainly a case to keep our eyes on as it is potentially precedent setting.

Alberta’s court of appeals affirmed the decision to deny an unvaccinated woman an organ transplant, which doctors say she needs or she will die.

A woman denied an organ transplant because she’s not vaccinated against COVID-19 hopes to take her case to the Supreme Court.

On Tuesday, the Alberta Court of Appeal upheld a lower court’s decision to deny Sheila Lewis an organ transplant. Doctors at Alberta Health Services (AHS) told Lewis she must be vaccinated to receive an organ transplant, which she will die without.

Lewis has refused the COVID-19 vaccine because she doesn’t trust it.

“My next move is going to the Supreme Court. But that takes money, and I have no income whatsoever.”

“When the ruling came down that the doctors won, that’s when I was taken off the organ list,” Lewis said.

JCCF says the COVID-19 vaccine requirement is premature because the vaccine is too new and still in phase three clinical trials in Canada. The absence of long-term safety data is one reason why Lewis refused vaccination.

“I call it a so-called vaccine. I’m really against it, and it’s not only because I didn’t want to take it but because of what I’ve seen.”

Lewis was shocked by the nine pages of adverse effects Pfizer was forced to release by a US federal judge. Pfizer wanted to keep the information hidden for 75 years.

One of Lewis’ organ transplant doctors testified in court that the doctor had not read Pfizer’s adverse effect documents. The doctor also erroneously testified that COVID vaccines are through clinical trials.

The doctor’s name is under a publication ban to protect their identity amid the controversial matter.

Lewis said she lost faith in doctors when the vaccine rolled out, and her mistrust grew. She asked her organ transplant doctor how safe the vaccine is, and the doctor said, “100% safe.”

Lewis said there was no way she could trust the doctor after that because she knew the vaccines weren’t completely safe.

[I am also including the next tweet in the thread with the link to the interview below.]

America’s adverse effect reporting system, known as VAERS, shows that over thirty thousand Americans have died from the COVID vaccine.

Lewis was supported in court by testimony from a few medical experts, including one who argued the vaccine could kill her due to her weakened organ.

“I didn’t take it because I thought it would do more harm,” she said. “So I am trying to protect myself.”

Most provinces stopped showing vaccinated versus unvaccinated statistics over the spring as cases, hospitalizations and deaths skyrocketed among vaccinated individuals.

Ontario’s government reported, “this comparison is no longer appropriate and may be misleading.”

From April 10-17 among the eligible population in Canada, 222 fully vaccinated individuals died from COVID compared to one unvaccinated person.

The Counter Signal asked AHS what data it relies on to determine that hospitalization and death risks are greater for unvaccinated individuals but did not receive a response.

Evidence supporting vaccination on an Alberta government website points to a Lancet study done by American researchers, including some funded by the World Health Organization and Pfizer.

Lewis is still determining if she’ll be able to raise enough money to take her case to the Supreme Court. Moreover, she doesn’t know much longer her failing organ will hold up.

I have asked on Twitter if there is a fundraiser set up for Sheila’s legal costs.