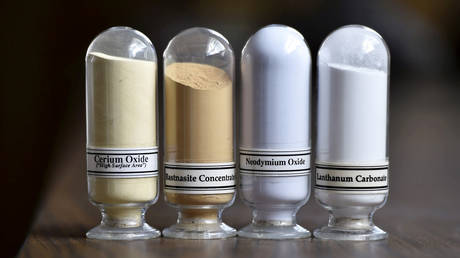 Europe is basing its future on high-tech products and applications, but while it requires vast amounts of rare earth metals to do so, it produces next to none of these critical elements.

Like lithium, rare earths are abundant. Deposits large enough to make economic sense, however, are only found in a limited number of areas around the world, with the largest deposits discovered so far in China. Rare earth exports are a lucrative business for Asia’s biggest economy, where it has virtually established world domination. And this domination is not good news for Europe—or the United States, for that matter.

In 2020, China mined 140,000 tons of rare earths. The United States was a distant second with an output of 38,000 tons, and Burma was third with 30,000 tons. Europe doesn’t even figure in the list of rare earth producers globally.

“Europe is heavily dependent on imports of rare earths from China. China has very big and good quality resources of rare earth elements. China was lucky in this case,” one academic from the Technical University of Athens told Euronews last year. In a bid to reduce that dependence, the European Union devised an action plan to boost domestic production of rare earths.

The action plan listed research and development of new mining and processing methods, sustainable financing of new mining projects, and recycling opportunities among the steps to be taken to reduce the rare earth dependence on China. It also led to the establishment of a European Raw Materials Alliance to promote wide collaboration on boosting European rare earth output. Yet all this is, for now, more talk than action.

Meanwhile, a mining company made a discovery in Norway that could go a long way towards reducing Europe’s dependence on China. Possibly the most massive phosphate deposit in the world, Norge Mining’s discovery in southwestern Norway contains not just phosphate—which is on the EU’s critical materials list—but also battery-essential vanadium and titanium.

This discovery must have certainly drawn applause from Brussels and from the HQs of carmakers that are getting ready to churn out millions of EVs—once the chip shortage is solved, that is. However, chances are that the Norwegian rare earths will be costlier than Chinese rare earths: after all, China has the most of these and can afford to produce, process, and export them more cheaply than Norway, where production is just beginning, and labor costs are substantially higher. Besides, one discovery might not be enough to secure all the rare earths Europe will need to make its Green New Deal dream come true.

Also on rt.com
What are rare earth metals & why they are China’s ‘nuclear option’ in trade war with US

This is the second time the European Union has underestimated the importance of domestic supply. The first time was when European electronics makers and car manufacturers allowed themselves to become dependent on imported rechargeable batteries. Now they are trying to fix this by building local manufacturing facilities. But the problem with rare earths is bigger: China may simply decide to stop exporting the minerals. Compared to that, the threat of Russia turning the gas tap off is a minor inconvenience, especially for a continent that relies more on wind and solar power than gas.

The threat is not just a hypothetical one, either. The Financial Times reported earlier this month, citing unnamed sources, that China’s Ministry of Industry and Information Technology had proposed new controls on the production and export of the group of 17 minerals known as rare earths. In addition to that, government officials had asked industry executives how badly companies in Europe and the United States would be affected by a curb on rare earth exports.

In all fairness, the US is the more likely target if China ever decides to go from researching the subject of rare earth export curbs to applying it in practice. Yet the very fact Beijing has the rare earths weapon and can yield it at will should cause insomnia in Brussels. After all, the Chinese already did it once, back in 2010, when they cut off rare earths supplies to Japan for a month after the detention of a Chinese boat captain, Bloomberg recalls in a recent article. During the one-month supply cut, shipments to Europe and the US were also affected, which goes to show just how essential Chinese rare earths have become globally.

What’s more problematic is that there is no alternative to these minerals. In this respect, Europe’s recycling efforts make good sense. That’s not just because recycling could ensure some local production but because it also eliminates the processing stage of the rare earth-bearing ore, where China is dominant, too. So dominant, in fact, that rare earths mined elsewhere, including the US, are sent to China for processing because China has the large-scale facilities to do it economically.

Europe, according to 2015 estimates, has enough rare earth reserves to be self-sufficient in their supply. Or rather, it would have enough for self-sufficiency if there was an economical way of extracting and processing the rare earths it has. Apparently, it has yet to find this economical way.

So far, Europe has been good to China. It even made it its biggest trade partner recently. But their relationship is nowhere near a relationship of equals. Melodramatic as it sounds, Europe’s green energy future hangs by a thread. This thread is made of the 17 elements that constitute what we commonly call rare earths, and it’s in the hands of China.

By Irina Slav for Oilprice.com

Why don't people get heart cancer?