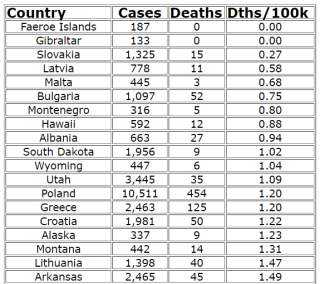 Below is the full list of U.S. states, and a large sample of European countries and territories, ranked by the number of coronavirus deaths per 100 thousand. The dataset for this table was pulled from www.worldometer.com, including the populations to calculate the deaths per 100k. (Data as of mid-afternoon April 23.)

As can be seen, quite a few U.S. states have achieved a low death count ranking, with many doing a better job than European counterparts.

At the bottom of the table, those countries and states that achieved a worse ranking than the overall position of the U.S. are highlighted in green and blue colors.

Note that every single U.S. state (and D.C.) at the bottom (highlighted in blue) are states with Democrat governors with major metropolitan centers controlled by Democrat mayors. As this evidence would suggest, inept polices by Democrat politicians have serious consequences for quality of life, especially during emergency periods.

When examining the U.S data more closely, there are 38 states that have less than 10 deaths per 100k (as of April 23, 2020). The average for those 38 states comes in at 3.7 deaths per 100k, which is quite respectable compared to many of the larger European countries.

Although these rankings will change over the next few weeks, one can already ascertain an appropriate strategy for dealing with the next pandemic, at least for the U.S.

All those states that have a ranking over ’10’ for the 2020 coronavirus would be put in a lock-down, including a travel quarantine when the pandemic occurs. There would need to be a strict adherence to Federal pandemic policies and plans by these states so that they do not endanger the lives of those who live in other states. The lock-down and quarantine would be implemented as soon as the CDC identifies a pandemic situation.

By following such a pandemic policy, states with good governance would better be able to avoid, for example, the sad situation that Indiana has found itself in due to bordering two terribly mismanaged Democrat controlled states, Michigan and Illinois. Due to its unfortunate geographical position, Indiana is the only Republican controlled state to exceed the 10 deaths per 100k mark.

Omicron, SA, UK, US in that order