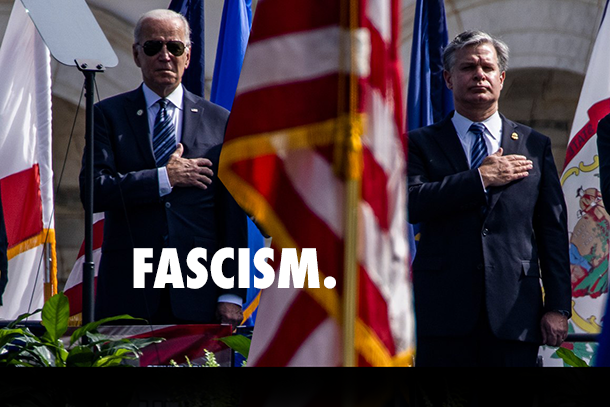 Last week, it was revealed how corporate operatives from Facebook, Twitter, Reddit, Discord, Wikipedia, Microsoft, and LinkedIn and others, led by the recently fired head of “trust & safety” political censorship department at Twitter, Vijaya Gadde, held regular clandestine meetings with partisan officials at the Department of Homeland Security (DHS) and the FBI – to discuss ways in which Big Tech firms could assist the Biden Administration in censoring the opinions and views of American citizens. This was done on an industrial scale, and should be viewed as a direct attack on the First Amendment to the United States Constitution, and also as an affront to the free press.

This is only the beginning. As the NY Post confirms below, the story gets worse. This unchecked abuse of power by government officials and their corporate partners should go down as one of the most shameful episodes in modern American history… The more we find out about the collusion that has been going on among the Biden administration, the security agencies and Big Tech, the more alarming it is — and the more unrepentant they are.

The latest bombshell from the Intercept, based on communications unveiled in the federal lawsuit Missouri v. Biden, shows that the Department of Homeland Security has been having monthly meetings with Facebook and Twitter to pressure them to censor social media posts about topics such as the botched withdrawal from Afghanistan, the origins of COVID-19, the efficacy of COVID vaccines, racial justice and US support for the war in Ukraine — in other words, anything that could be detrimental to public support for the Biden administration.

We already know that the FBI was involved in efforts to censor and bury information that might have harmed Joe Biden’s candidacy back in 2020, including The Post’s exclusive about Hunter Biden’s laptop in October 2020. That amounted to election interference, which prevented the American people from doing the necessary due diligence on one of the two candidates for president. So successful was the strategy that the Biden administration appears to have expanded it.

Security agencies have switched their attention from combating foreign disinformation to censoring the speech of American citizens who dissent from the government-approved narrative. No matter that free speech is protected by the First Amendment; if the Biden administration doesn’t like the speech, it labels it “Misinformation, Disinformation and Malformation,” and it is deputizing the FBI and DHS to strong­arm Big Tech to censor it and de-platform serial offenders.

It doesn’t matter what brand your politics is, this is Stasi stuff.

DHS also recommended the use of third-party nonprofit groups as a “clearinghouse for information to avoid the appearance of government propaganda,” the Intercept reported.

In the spy business, that is what is called a “cutout,” points out John Schindler, a former senior intelligence analyst with the National Security Agency. In other words, using a “deniable intermediary” legally to spread the White House’s propaganda.

A perfect example of how the censorship regime works is the Hunter Biden laptop. Two FBI agents — Elvis Chan and Laura Dehmlow — have been identified in documents uncovered by the Missouri lawsuit as pressuring Facebook to suppress The Post’s accurate and factual reporting.

We know the FBI at the time was spying on Rudy Giuliani’s online cloud with a covert surveillance warrant. Therefore, it had access to his emails in August 2020 from computer store whistleblower John Paul Mac Isaac and to my text messages discussing when The Post would publish the story. It sure looks as if the FBI deliberately pre-censored a legitimate story for a political aim.

An upcoming book by Mac Isaac, the owner of the now-defunct Delaware computer repair shop where Hunter Biden abandoned his laptop in April 2019, sheds more light on this deep-state election interference…