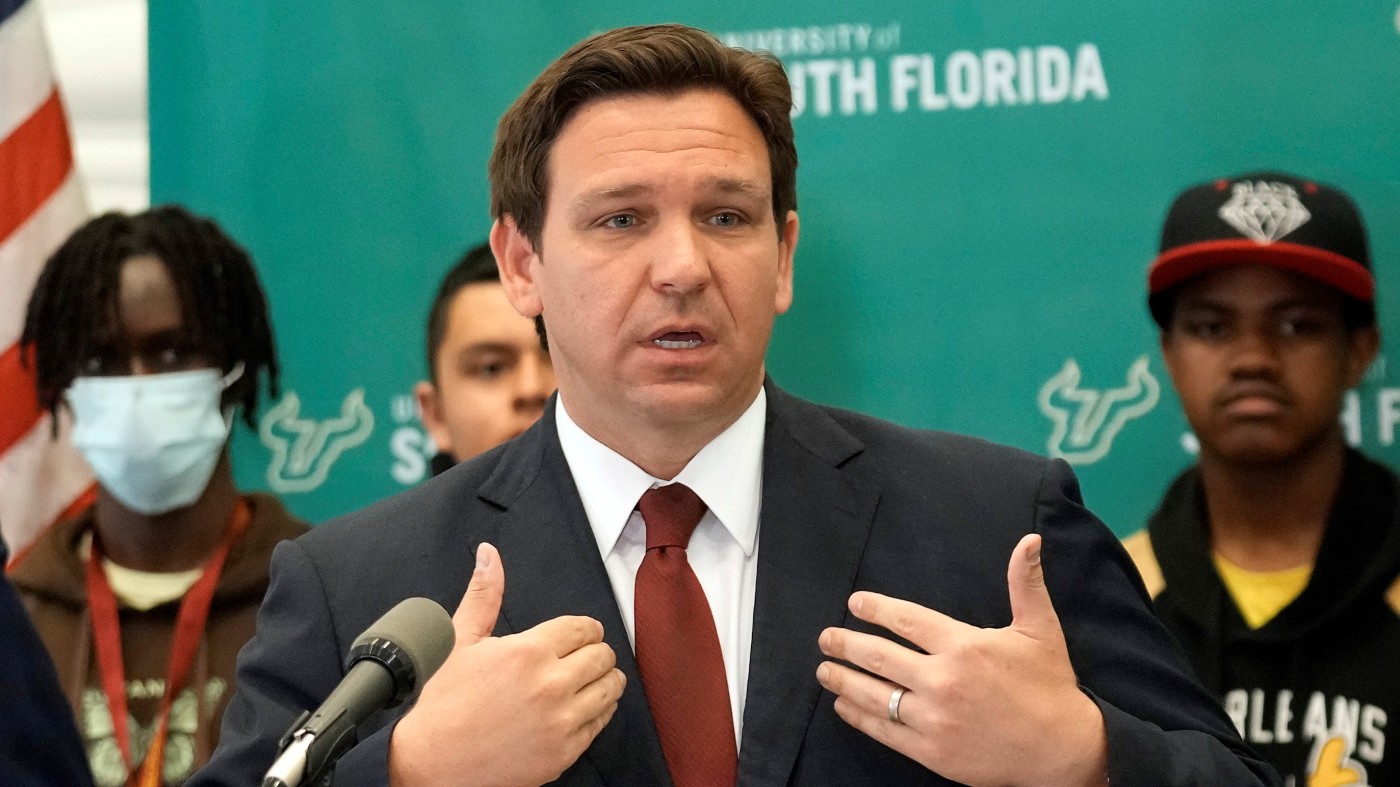 “That is totally inappropriate,” said DeSantis. “That is not something children should be exposed to.”

And while most parents in the U.S. would probably agree with the Governor on this issue, it is what he said next that should concern every parent in America who values parental rights.

When asked by reporters whether he would support proposed legislation from a Florida state representative that would punish parents who take their children to such performances, the governor said he has asked his staff to look into the idea.

“We have child protective statutes on the books,” the governor said. “We have laws against child endangerment.”

“It used to be kids would be off-limits. Used to be everybody agreed with that,” DeSantis continued. “Now it just seems like there’s a concerted effort to be exposing kids more and more to things that are not age appropriate.” (Source.)

Threatening parents who do not conform with a politician’s view about what constitutes being a good parent or not by having their children kidnapped by the State and put into the nation’s lucrative child trafficking network called “foster care” by government “child protection” agents, is something everybody should be against, regardless of your political views.

As we have documented numerous times over the past many years, putting children into the nation’s child trafficking network called “foster care” has disastrous and deadly results, as many of these children are raped and sexually abused in foster care, and nationwide studies have shown that children who are left with their biological families, even in troubled homes, fare much better than children forced to be separated from their families and put into the foster care system. See:

Study: Children from Poor Parents, Even if they have a Drug Problem, do Worse if Put into Foster Care

When the state has the power to decide who is a good parent and who is not, who gets to define what a good “parent” is? And even if there is an accepted legal definition for a “good parent,” why punish the children for the crimes of their parents?

Does the state EVER have a right to remove a child from a home where neither the child nor the parents are requesting it? If we follow the principles of the U.S. Constitution, the very clear answer is: NO!

If the parents are committing a crime, they are the ones who should be arrested, arraigned, and be allowed due process of the law to prove their innocence or guilt, while THEY are the ones removed from the home, not the children.

But unfortunately, taking children away from their parents and incarcerating them in the foster care system where they are routinely trafficked in a $BILLION child trafficking system, is much more profitable for the State.

Does the State Ever Have a “Right” to Remove Children from a Home?

Where is the outrage from Gov. DeSantis against the parents who are trying to abuse or kill their children by forcing them to take a COVID-19 “vaccine” that is today maiming and killing so many children, including children in the “Red” State of Florida?

Pro-Vaccine, Pro-Pharma and Pro-Zionist DeSantis is Being Groomed to Oppose Trump for President 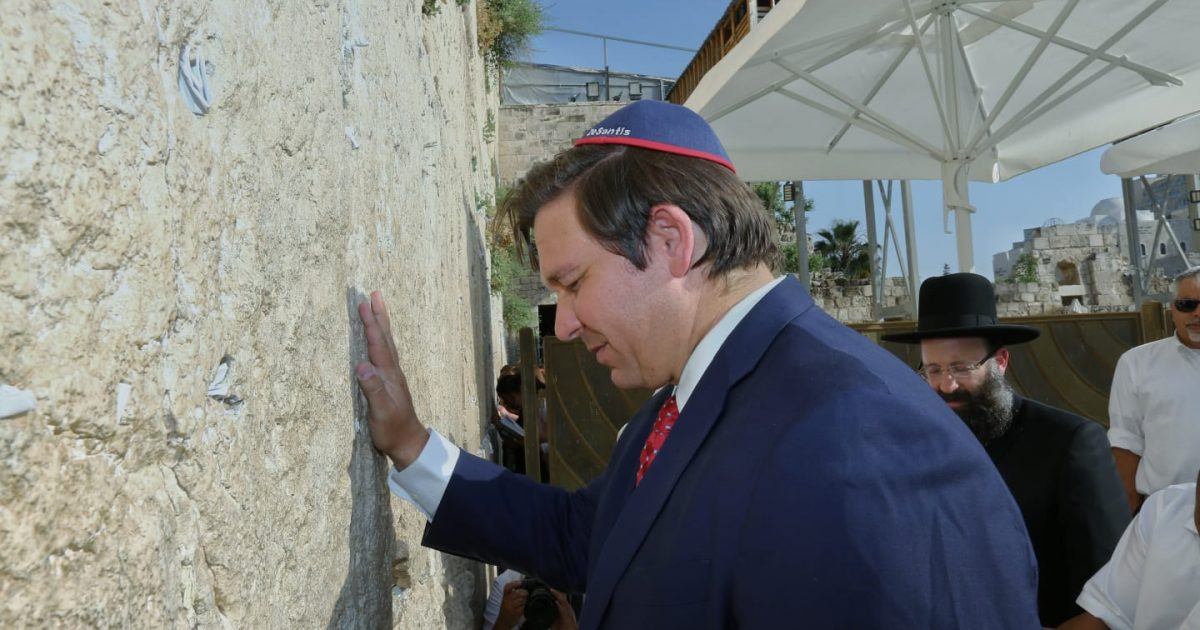 Ron DeSantis is clearly being promoted as an alternative to Donald Trump as the next GOP candidate for President of the United States.

In an article published today which is representative of the current rhetoric being published about DeSantis, Cherie Zaslawsky published an article titled: Make America Florida: The Case for DeSantis.

Many people I know have left California for what they consider greener—I mean redder—pastures: red states free of most of the lunacy in the “woke” Golden State.

Some moved to Texas, some to Idaho, but most have fled to Florida, leaving us stay-at-homes green with envy.

Why Florida—with its notorious humidity, alligators, snakes, humungous mosquitos, and yearly hurricanes? In a word: DeSantis.

Governor DeSantis has continuously put the liberty, interests, and wellbeing of Floridians first, for which he endures perpetual barbs and ridicule from the Pravda media’s coterie of presstitutes. Imagine—he took a stand for sanity in the schools, by outlawing gender “fluidity” indoctrination of children in kindergarten through third grade. How dare he!

And as of September 2020, he refused to allow mask mandates! Does he think he’s smarter than the CDC? Let’s hope so!

Well, I have a suggestion. Instead of millions of us envying Floridians and dreaming of moving there, which may be out of reach for many people, why not bring Florida to us? That is, why not turn Florida’s Governor DeSantis into President DeSantis? Then instead of his fighting tirelessly for Floridians only, he’d be fighting for all of us—and we could stay home! We wouldn’t have to deal with the alligators, mosquitoes, hurricanes and Floridian traffic jams.

She then goes on to explain why DeSantis is a better choice than Trump:

Now in his role as Republican Party kingmaker, Trump is on the campaign trail endorsing candidates for Congress. Unfortunately, as investigative journalist Kelleigh Nelson pointed out in a recent article, Trump has endorsed several Republican quislings, including media personality Dr. Oz, who just so happens to be a Turkish Muslim who apparently voted in Turkey’s election in 2018, and supports the Leftist agenda on many counts. Unbelievably, Trump has also endorsed Greg Pence, Judas Pence’s brother.

In case you’ve forgotten, Trump let it fall to VP Mike Pence to save the Republic by refusing to certify the questionable voting results in the swing states, and allowing Senator Cruz’s proposal for a 10-day emergency audit of the disputed states’ results.  Pence infamously went on to certify the theft of our election instead. And let’s not forget that prior to this act of betrayal, Pence assembled the Coronavirus Task Force that brought us the deadly duo of FauxChi and Birx.

Why on earth would Trump do him the favor of endorsing his brother—who’s likely to be another subversive RINO?

And how about Trump’s refusal to admit Operation Warp Speed was a colossal blunder? Does he still not know thousands of people have died or been disabled by Big Pharma’s experimental injections? Many of us have been patiently waiting for him to discover the truth and shout it from the rooftops, warning people not to get any more jabs. Still waiting…

However, it is hard to see what really differentiates these two politicians. They are both pro-pharma, pro-vaccine, and pro-Zionism and against free speech and the First Amendment when it comes to anything negative regarding Israel, calling anything negative “anti-semitic.”

Being pro-pharma, pro-vaccine, and pro-Israel are bipartisan issues, and nobody from either party can be against vaccines and Israel and hold any major political office in this country.

Ron DeSantis is clearly pro-pharma and pro-vaccine. Back in July of 2021 during the height of the COVID-19 vaccine push and mandates, he clearly parroted the lies being spewed forth by the CDC that the vaccines were “saving lives” and that the hospitals were filled with those “unvaccinated.”

“If you are vaccinated, fully vaccinated, the chances of you getting seriously ill or dying from COVID is effectively zero,” DeSantis said during a Wednesday press briefing.

“If you look at the people being admitted to hospitals, over 95 percent of them are either not fully vaccinated or not vaccinated. And so these vaccines are saving lives.” (Source.)

Which practice by parents in Florida do you think is causing more harm to their children: taking them to a “drag show” or injecting a toxic bioweapon into their body?

DeSantis was part of the Republican party delegation that went to Israel when Trump moved the U.S. Embassy from Tel Aviv to Jerusalem, and his State (Florida) punishes businesses who dare to use their First Amendment right to criticize Israel. 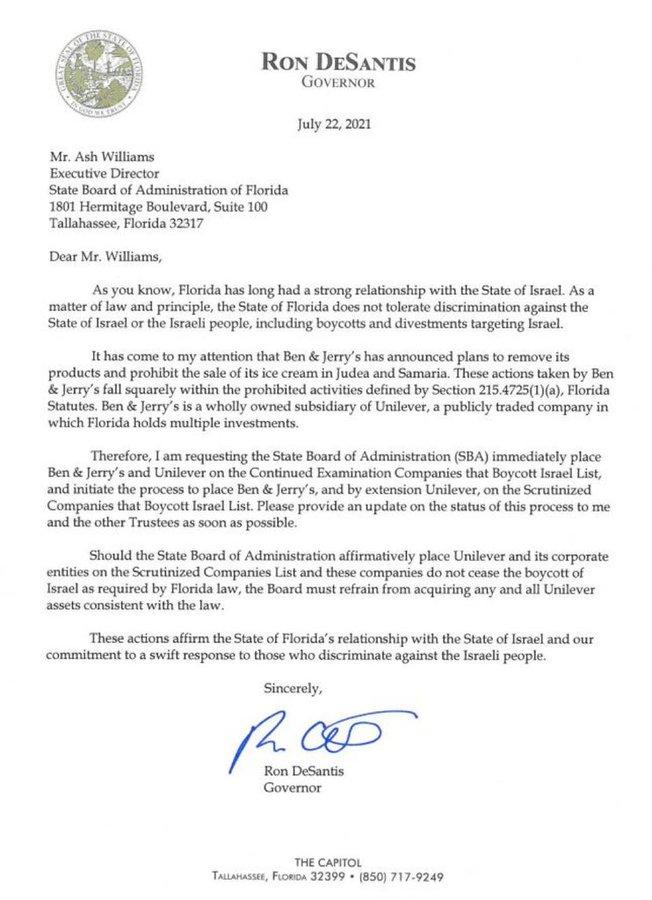 The Globalists want to eliminate free speech on this issue, and define “holocaust” according to only their view.

And these Satanic Globalist Jews control the Wall Street Banks, the Corporate Media, the Entertainment industry, and education in the U.S.

(Note: Before emailing me and criticizing me on what you think I believe about the “Jews” please read this article where I write:

“For quite some time I have considered writing an article on this topic, with the title: Brian Shilhavy Comes out of the closet and admits: I am a Jew.”

The reason I would want to start an article that way is to disarm at the very beginning all those who would want to label me as “anti-Semitic” for not agreeing with their position. If I can wear the label of “Jew” on myself, how could I be “anti-Semitic?” (Source.))

So we are beginning to see this UN resolution be adopted here in the U.S. as well, as almost every state is now passing a similar resolution, with widespread non-partisan support.

At the national level, a similar bill just recently passed the House of Representatives by a vote of 420-1, with Kentucky Rep Thomas Massie being the lone vote against the bill. See:

It took a lot of courage for Massie to take a stance in favor of the Constitution of the U.S. and the First Amendment, and oppose the pro-Israel pro-Zionism political lobby.

Ron DeSantis is part of this lobby, and just hosted an “Antisemitism Town Hall Meeting” in Florida. You can listen to it on Rumble here.

At around the 3-minute mark, he states:

But when they (Israel) are singled out for disfavored treatment over countries that are committing untold atrocities, and yet Israel is the #1 country that is being sanctioned by the United Nations over and over again, when they are held to a different standard and being singled out like that, that does feed anti-Semitism.

What “sanctions” against Israel are Gov. DeSantis talking about??

According to multiple sources I have checked, Russia today is the most sanctioned country in the world since the Ukraine war started, and before that it was Iran. 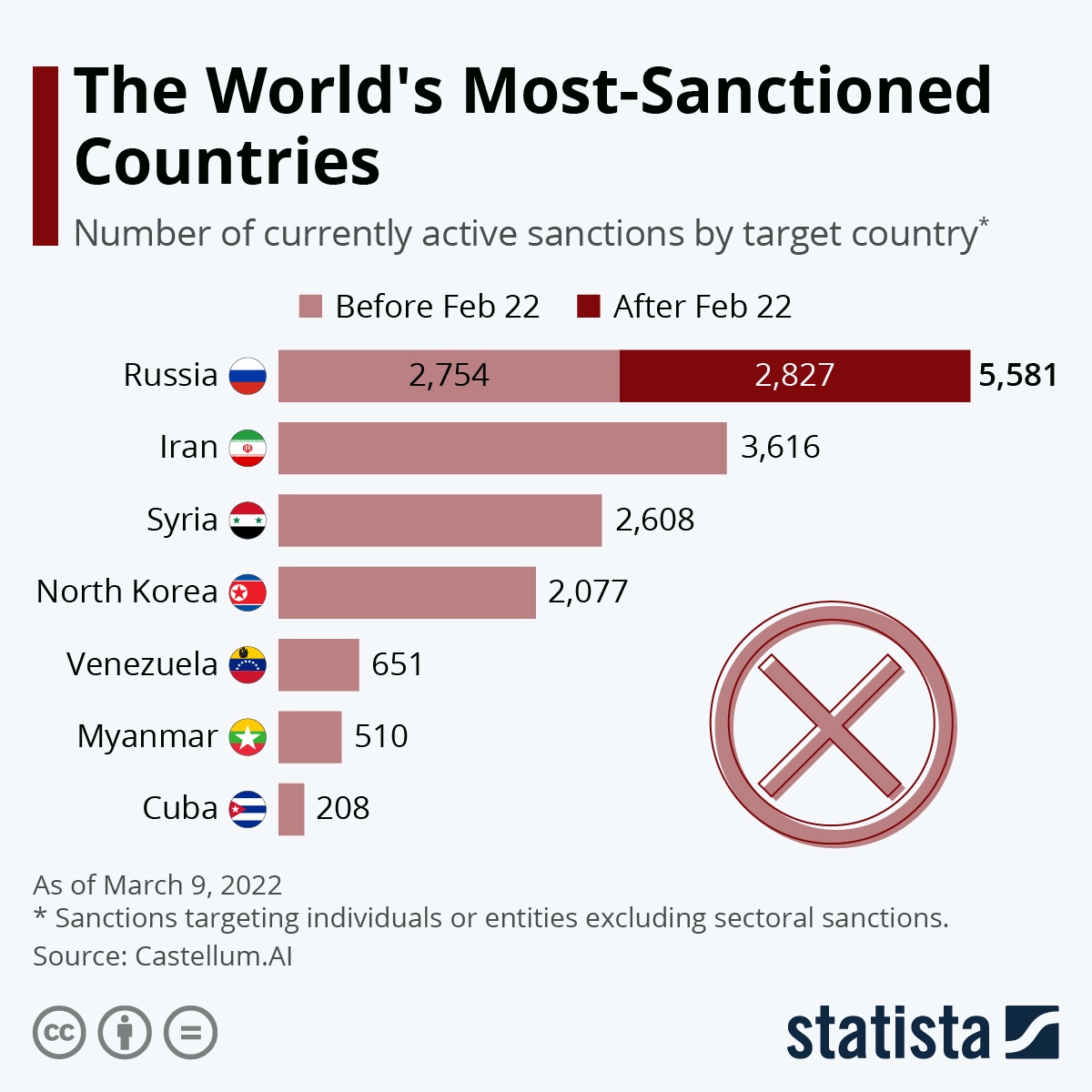 These “anti-semitism” laws are simply an attempt by the Globalists to restrict free speech, and ignore the much greater “holocaust” that happened against the Christians in Russia under Zionist Lenin and the Jewish Rothschild bankers where tens of millions of Christians were slaughtered, eclipsing anything that happened in Germany. See:

The public has not elected Presidents in the United States for many years, if ever. Whether Trump or DeSantis or someone else, you can be sure they will be approved by the Wall Street Billionaires and Bankers so they can dictate to them what steps are next in the Great Reset, and as such, they MUST be pro-pharma, pro-vaccine, and pro-Zionist Israel supporters.

Voting will change NOTHING. Only a revolution to throw all these murderers out of office and conduct trials to hang the Globalists who are destroying this nation, can bring about any change in America at this point.