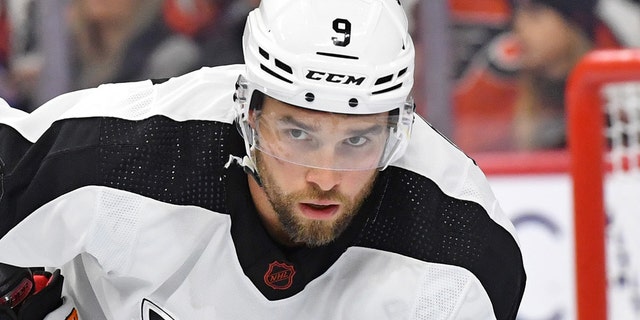 Provorov was labeled “homophobic” online, and one NHL analyst advised him to go back to Russia and “get involved” in the conflict between the country and Ukraine.

Ahead of the team’s game against the Chicago Blackhawks, Tortorella addressed the issue. He said he had no concerns about whether the controversy would affect the locker room. He said Provorov approached him about not wearing the jersey before Tuesday’s game.

“Not for a second,” Tortorella said, via TSN. “The meeting, the 15 to 20 minutes we spent together, was really healthy. [A] really good process in a very important situation.

“To me, it bonds the team going through something like that. I’m not concerned about the speculation of a team splitting up. Not a chance.”

Tortorella went on to say that Provorov “did nothing wrong” and strongly defended him.

“Provy did nothing wrong,” he added. “Just because you don’t agree with his decision, doesn’t mean he did anything wrong.”

The longtime hockey coach then drew from his own experience when he received backlash for his rant on players kneeling during the national anthem.

“Let me put it to you this way. My experience, back in ’16, when I was asked a question about the flag. . . . ‘If a player sits [for the anthem] what would you do?’ and I said, ‘They would sit the rest of the game.’ I was wrong,” Tortorella said. “I learned a lot through that experience. My feelings towards any type of protest to the flag, during the anthem, it disgusts me. To this day, it disgusts me. It shouldn’t be done. Those are my feelings; I can’t push those feelings onto someone else. So, I was wrong in saying that back then.

” . . . Same situation here. Provy is not out there banging a drum against Pride Night. He quietly went about his business. Him and I had a number of conversations to how we were gonna do this. You have the team, you have him, you have all this going on, talked a lot, you have the whole process there. He felt strongly with his beliefs, and he stayed with it.”

Provorov didn’t participate in pregame warmups when the team wore Pride-themed jerseys and used sticks wrapped in rainbow Pride tape. He cited his Russian Orthodox religion as the reason why he didn’t participate. He eventually played in the game against the Anaheim Ducks.

“Just because you don’t agree with his decision, doesn’t mean he did anything wrong.”

The Russia native, who is in his seventh season with the Flyers, received backlash on social media for the boycott.

Despite calls for punishment, the NHL didn’t appear to be ready to fine or ban anyone over Provorov’s decision.

“Hockey is for Everyone is the umbrella initiative under which the League encourages Clubs to celebrate the diversity that exists in their respective markets, and to work to achieve more welcoming and inclusive environments for all fans,” the league said in a statement. “Clubs decide whom to celebrate, when and how – with League counsel and support. Players are free to decide which initiatives to support, and we continue to encourage their voices and perspectives on social and cultural issues.”

Ryan Gaydos is the sports editor for Fox News Digital.