Google Trends for “climate change” are not rising, but something very weird is going on… « JoNova

What started as a minor an Australian headline turned into a glimpse of a mysterious world-wide phenomenon.

The Australian ABC tells us that Australian searches for climate change are up 5000%:

But even the ABC admits no one is really talking about it — apparently Australians are secretly thinking about climate change at home on their computer:

Discussion of climate policy may be conspicuously absent this federal election campaign, but Google search data suggests the warming of the planet is weighing on voters’ minds — at least more so than in 2019.

But strangely, they don’t report actual google search results for “climate change” — instead they quote some focus groups, and talk about 5000% increases in obscure questions like “What is climate change meaning?” which no one except 12 year olds doing high school assignments probably wants to know.

So here’s the last 18 years of actual Google data on Australian searches for “climate change”:

But, wait, really? Is this year really that much more exciting for “climate change” than the uber hot duo of Copenhagen and ClimateGate in 2009, or Al Gores Nobel winning Documentary in 2007, or the massive bushfires of Dec 2019 when the whole continent was on fire?

It turns out that all the frantic interest in “climate change” in Australia happened in just one week. No, wait, it was all in just one day!

And that day Australians were interested in climate change was April 22.

What freak event would that be, that I can’t remember from three weeks ago?

But wait — the same effect happened on the exact same day in the USA, and the UK, and  New Zealand, and Canada.  And tripping off the Radar of Weirdness, the one-day wonder effect happened even in China and Afghanistan too?

Bizarrely, the whole world woke up on April 22 and decided to search for “climate change”. Even people fighting a war in Russia and Ukraine stopped to look up “climate change” too. Though for the latter two countries, unlike many places, it wasn’t an all time highest ever record. But that did occur and by a wild margin in the West. What was going on?

Remember it? Me neither. Apparently Joe Biden gave a speech, and the whole world got excited, and more people than ever before searched for “climate change” on their computer, even in the back-blocks of Brazil, and the far reaches of Poland.  And then it was gone. The record hit was a One Day Wonder. Either that or it was a fake “bot” at work, rigging results — but you’d have to ask, why bother? If the aim was to create a hit for PR purposes, why that day? Why not every day?  And where were all the stories — Did I miss them? 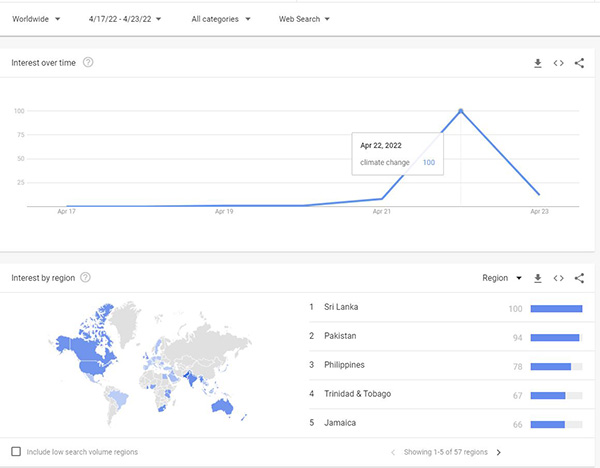 The whole world was searching for climate change on April 22?

There was one lame UK story that capitalized on the trendy spike – but it was hardly a big event worthy of coordinated cyber bot campaign. 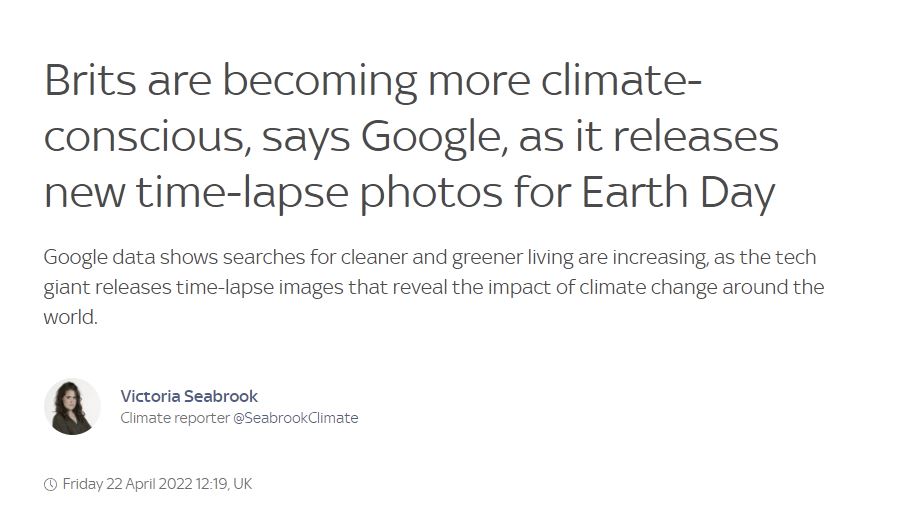 At the 3-million-dollar-a-day ABC not one journalist — apparently — bothered to do a google Trends search on “climate change” for the latest story. They’re activists — all of them, and rather pathetic ones. Consider how lame this is — not only is there no rising trend, and not much discussion of climate policy a bare two weeks before an election but the journalists are trying to convince themselves that Australians care about climate change and are really too scared to mention it.

So Australians are googling climate change, even if they’re not talking about it.

And in areas where they’re talking about it least, they may be googling it even more than elsewhere. “Maybe they can ask Google when they can’t ask their neighbour,” Dr Huntley said. “It’s not a surprise to me that people in small farming communities, where they don’t necessarily feel like they can have this conversation at the pub, are places where people are googling it.”

Monkeypox may have been spreading in UK for years