Has NATO Now Taken Over Command of the U.S. Navy? 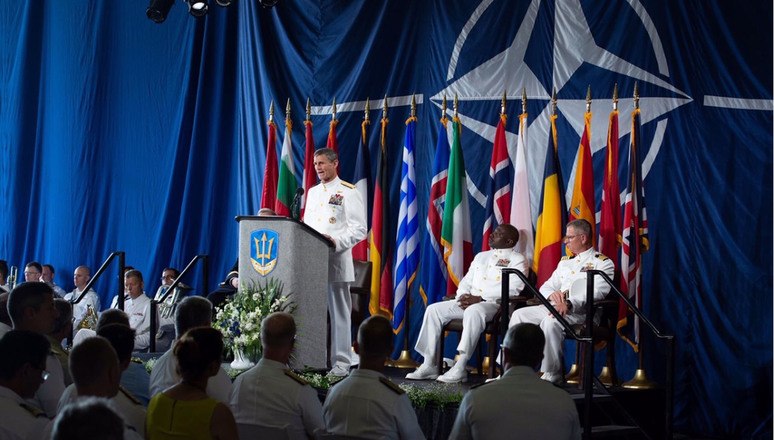 On 15 July 2021, Allied Joint Force Command Norfolk declared Full Operational Capability and marked the occasion with a ceremony presided over by its Commander, Vice Admiral Andrew Lewis. General Milley, the US Chairman of the Joint Chiefs of Staff also attended the ceremony. Notice that although this event occurred in Norfolk, VA, that the U.S. flag appears nowhere on the stage. (Source.)

Has a non-U.S. citizen, a military general from France, now taken over command of the U.S. Navy under NATO? 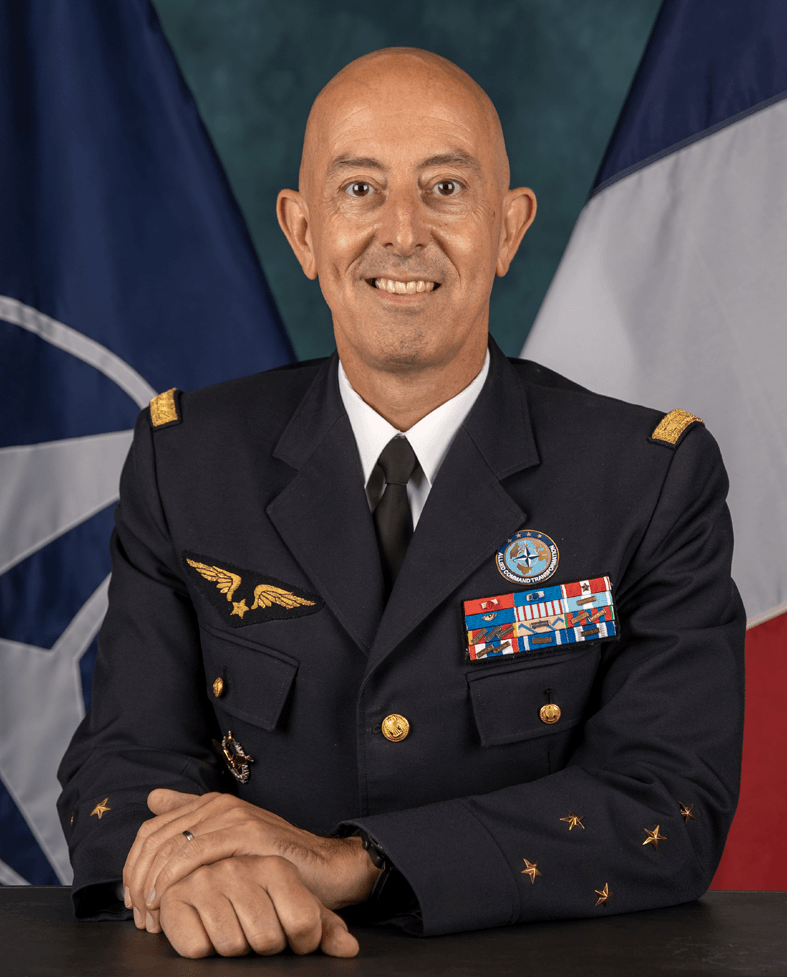 French General Philippe Lavigne was appointed to the post of Supreme Allied Commander Transformation by the North Atlantic Council on May 28, 2021. (Source.)

The North Atlantic Council is the political organization that controls NATO:

The North Atlantic Council is the principal political decision-making body within NATO. It oversees the political and military process relating to security issues affecting the whole Alliance. It brings together representatives of each member country to discuss policy or operational questions requiring collective decisions, providing a forum for wide-ranging consultation between members on all issues affecting their peace and security. (Source.) 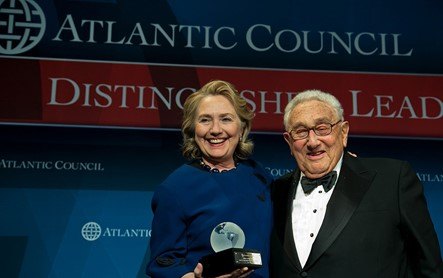 Joe Schaeffer, writing for The World Tribune on October 25, 2019, reported:

What can you say about an organization that brings together George Soros, the Clintons, leading defense contractors, a powerful lobbying firm that employs ex-House speaker John Boehner and notoriously biased media outlets such as CNN and Reuters, all under the same umbrella?

The Atlantic Council‘s commitment to globalism is at the core of its mission statement. “Through the papers we write, the ideas we generate, and the communities we build, the Council shapes policy choices and strategies to create a more secure and prosperous world,” the group says of itself.

Preserving the North Atlantic Treaty Organization (NATO) and fostering a Cold War-era hostility to Russia are among its chief priorities. So it is no surprise that the Council is thoroughly engaged in Ukraine.

The Council is funded by and partners with Burisma, the Ukrainian energy company that paid Joe Biden’s son Hunter $83,000 a month to serve as a consultant, despite the younger Biden having no experience whatsoever in the energy industry.

The think tank has publicly declared its great debt to progressive globalist billionaire George Soros. “Soros’ political and strategic philanthropy is an inspirational example of how one man’s vision and unflagging commitment to the open society ideal can change the lives of millions,” the Council gushed in a 2015 article on its website simply titled “Thank You, George!”

“Soros has become one of the world’s most ardent advocates of the new Ukraine,” the article states.

Soros’s Open Society Foundations is listed as one of the top donors to the Atlantic Council, coming in under the $250,000-$499,000 category in the Council’s “Honor Roll of Contributors” for the 2018 fiscal year. (Full Article.)

Less than two months after the appointment of French General Philippe Lavigne to the post of Supreme Allied Commander Transformation by the North Atlantic Council, NATO annexed the largest naval base on U.S. soil, in Norfolk, Virginia, on July 15, 2021, bringing it completely under the control of NATO, even though the base is on U.S. soil.

There was almost no media coverage of this event, but we covered this story in September last year with a story published at GlobalResearch.ca:

In what may be another chapter in the formation of a New World Government, the question remains how NATO asserted its omnipotent authority to establish a new Atlantic Command at the Norfolk Naval Base with the apparent acquiescence of the US military and Congressional leadership.

Once the largest naval port in the world, significant questions persist about how the Pentagon allowed this travesty against the Republic to occur with what appears to have been a black-out of national media attention, no Congressional scrutiny and no Trump Administration participation. I am still wrapping my mind around how easily the usurpation of an American military facility of such prominence could be so quietly accomplished with such finesse requiring so many accomplices. (Full article.)

Today (July 20, 2022) it was announced that the USS Harry S. Truman Carrier Strike Group was now also under NATO control.

For the first time since the end of the Cold War, a US Navy aircraft carrier sailed under NATO command. The USS Harry S. Truman Carrier Strike Group (CSG) first sailed under the command of Naval Striking and Support Forces NATO (STRIKFORNATO) in February 2022, during vigilance activity Neptune Strike 22, and most recently during Exercise Neptune Spear 22 in May.

The carrier has sailed with CSGs from France, Italy and Spain since arriving in the Mediterranean Sea late last year. Together, the strike groups have practised operating as a combined maritime task force. Their carrier-launched fighter jets have helped secure the skies over the eastern part of the Alliance, providing a crucial show of support during a time of increased tensions.

How many U.S. citizens are even aware that the U.S. Navy is now almost completely under the control of NATO, including our largest naval base in Norfolk, VA?

Probably almost nobody. My father is a U.S. Navy veteran who was commissioned to Norfolk in the early 1960s, and it is my own birthplace, as I was born in the Navy hospital there.

But not even he knew about this, until I told him. It is hard for me to even comprehend that my birthplace, while on U.S. soil, is no longer under U.S. control, but instead is under the command of a French General.

I think it is time for the many veterans in this country, and the hundreds of thousands of service members who are now losing their jobs because they refuse to take a toxic vaccine that might kill them, to start banding together and possibly start forming local militia groups. It might be time for a military coup, because if something like this doesn’t happen soon, the U.S. military will just be a branch of NATO and the UN.

(Thank you to BrassBalls.blog who alerted me to today’s news about the Harry S. Truman Carrier Strike Group coming under NATO control.) 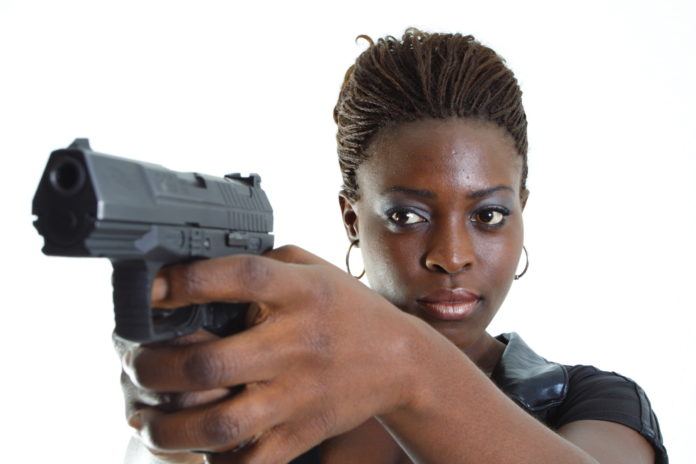