Unlike America, Australia did it “right.” The country implemented a “real” lockdown and de facto travel ban until vaccines were distributed. As such, the few deaths Australians experienced prior to the vaccines should be gone by now, right? In fact, nearly all their deaths have taken place after most vulnerable people got at least three doses of the magic juice. Indeed, not so magical after all.

An Australian writer has collated the recent reports from New South Wales Health and found that out of 798 reported COVID deaths in the most populous Aussie state over the past eight weeks, just two of them might have been unvaccinated. For the latest full week ending on July 16, all 142 reported deaths were jabbed and 68% of them were triple-jabbed. 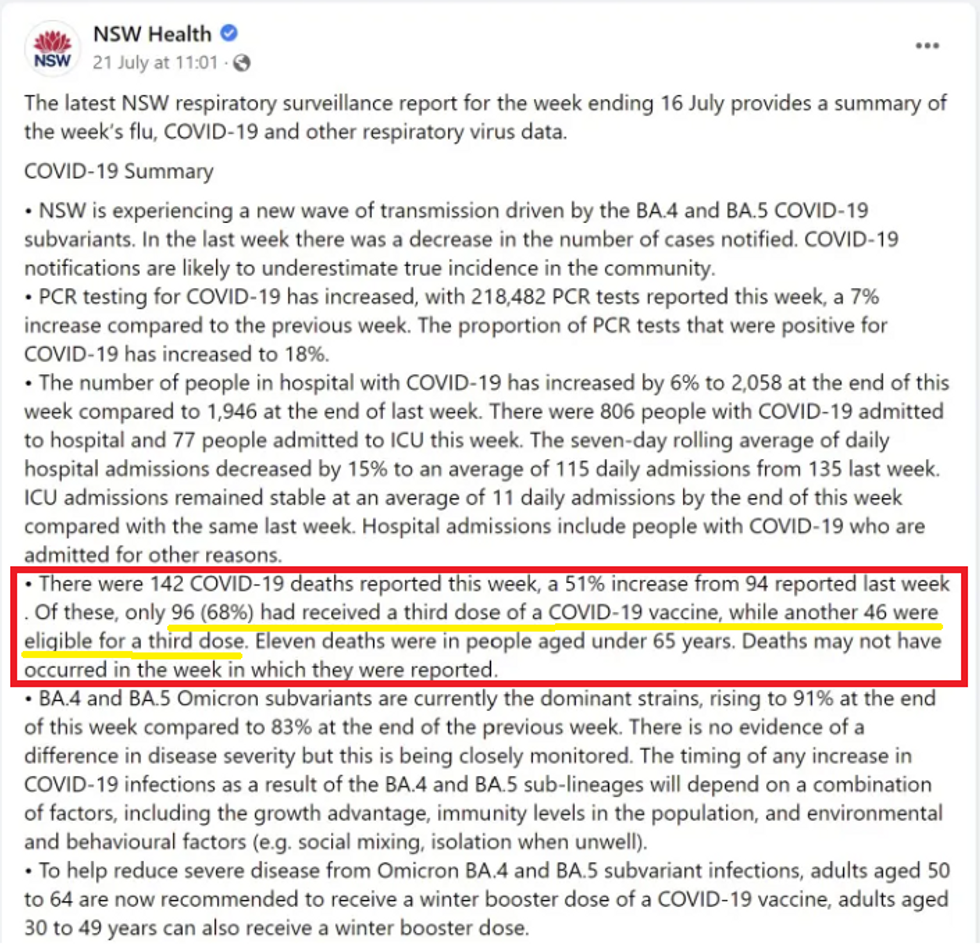 They tend to avoid using the word “unvaccinated” and resort to telling people how many were fully vaccinated, so it’s unclear whether the two had one jab or zero jabs, but for argument’s sake let’s just say they were unvaccinated. This means that just 0.0025% of the COVID deaths in the state over the past eight weeks were unjabbed, even though the unjabbed compose 5% of the population.

Now, inevitably, naysayers will suggest that most of the vulnerable people are seniors, and they have a nearly 100% vaccination rate, so of course the deaths will be among the vaccinated. The problem with this premise is that it would only work if the raw numbers of deaths decreased, not increased, with the vaccination. In other words, you’d have even fewer deaths than pre-vaccination, but the few deaths there are would be among the vaccinated seniors. That is what you would expect from a vaccine that has anywhere near the efficacy against death that its proponents are suggesting. 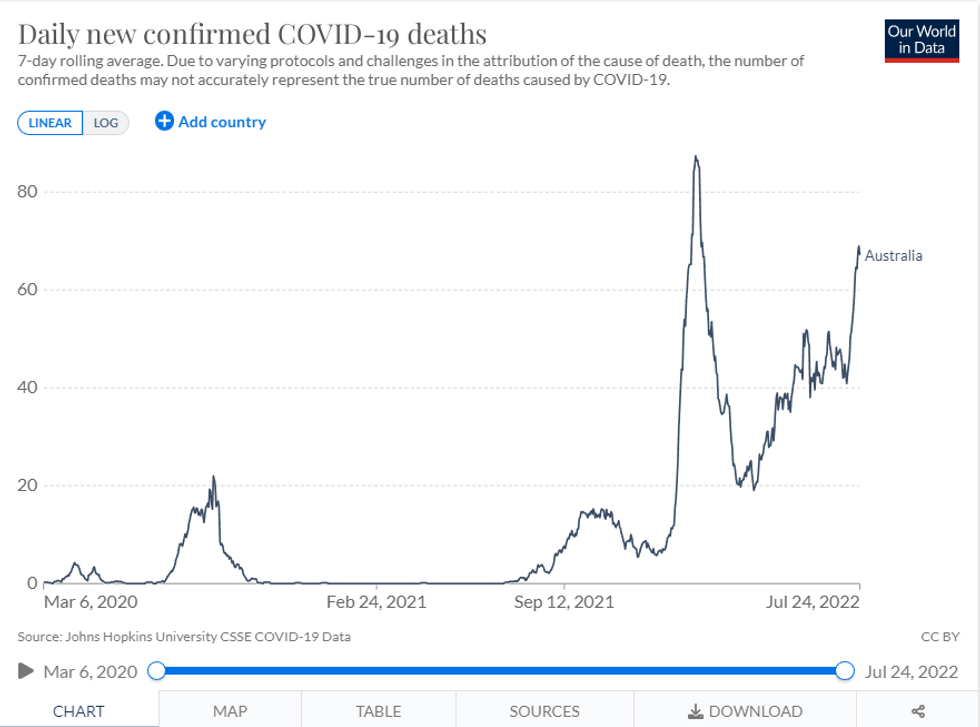 As you can see, Australia didn’t really begin to start having problems with COVID deaths until the beginning of 2022, after nearly every Australian senior had been vaccinated. As of now, 94% of seniors have had three doses, and 60% even had their fourth! Yet 98% of their deaths took place in 2022 with Omicron, the least pathogenic version of the virus. And they are just getting warmed up, because they currently have one of the highest death rates in the world.

In fact, the only reason why Australia is not claiming the international title right now is because it is being outstripped by New Zealand, which, by far, has the highest death rate in the world. Just like Australia, New Zealand had a strict lockdown and travel ban until the vaccines were distributed. More than 98% of its deaths occurred after March 2022 – more than two years after the pandemic began. 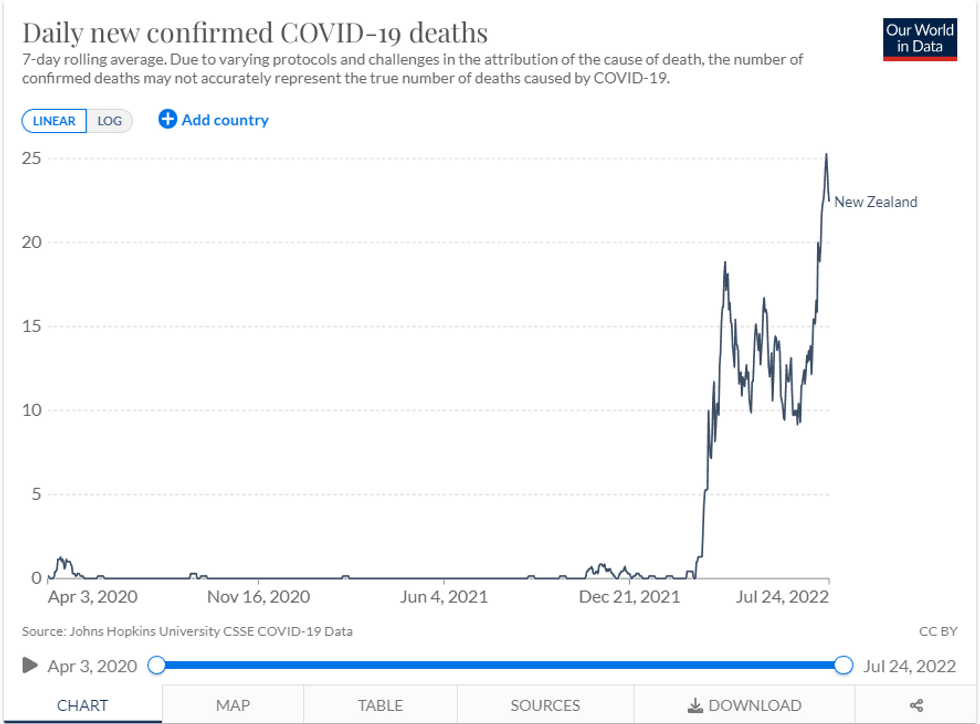 Already in February, before the Omicron wave hit, 75% of those eligible for boosters in New Zealand had their third dose. The bottom line is that if this vaccine had any degree of efficacy even against death and serious illness, we should not be seeing endless curves only after everyone is boosted, much worse than ever before in these countries. This is occurring in all the Pacific Rim and Far East countries.

Prior to 2022, there were two parts of the world that skated through the pandemic without excess deaths: the Far East and Africa. Yet since 2022 began, the Far East has finally gotten its share of deaths, while Africa seems to be doing just fine with herd immunity. Take a look at the difference between some of the Far East countries and Nigeria, Africa’s most populous country. 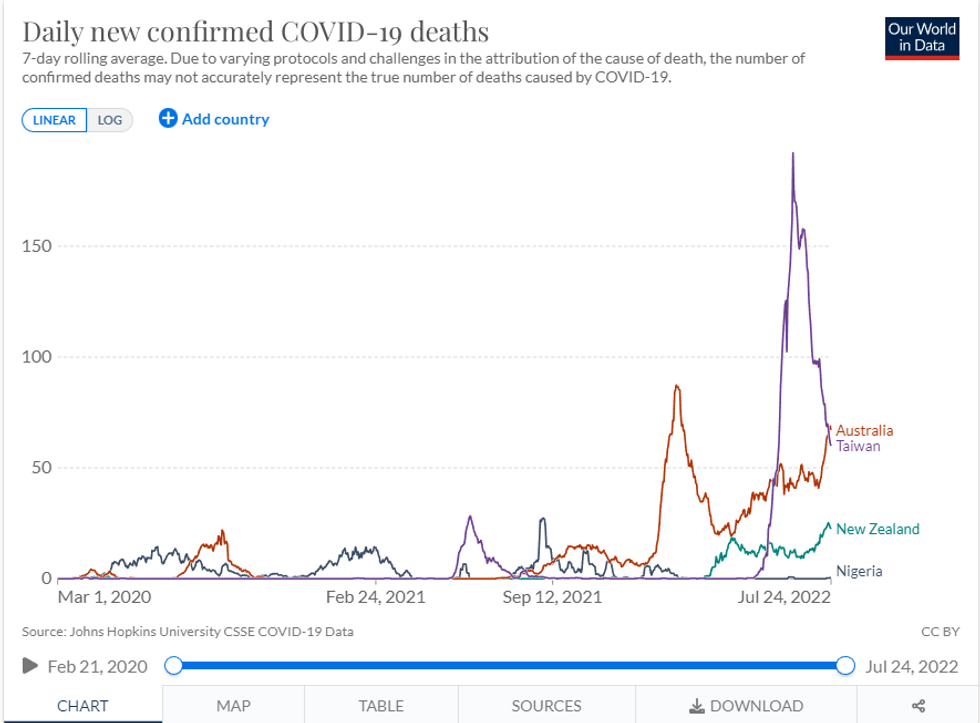 What is the characteristic distinguishing these countries from Nigeria (and most other African countries) that occurred sometime in 2021, after both parts of the world seemed to do well with COVID? 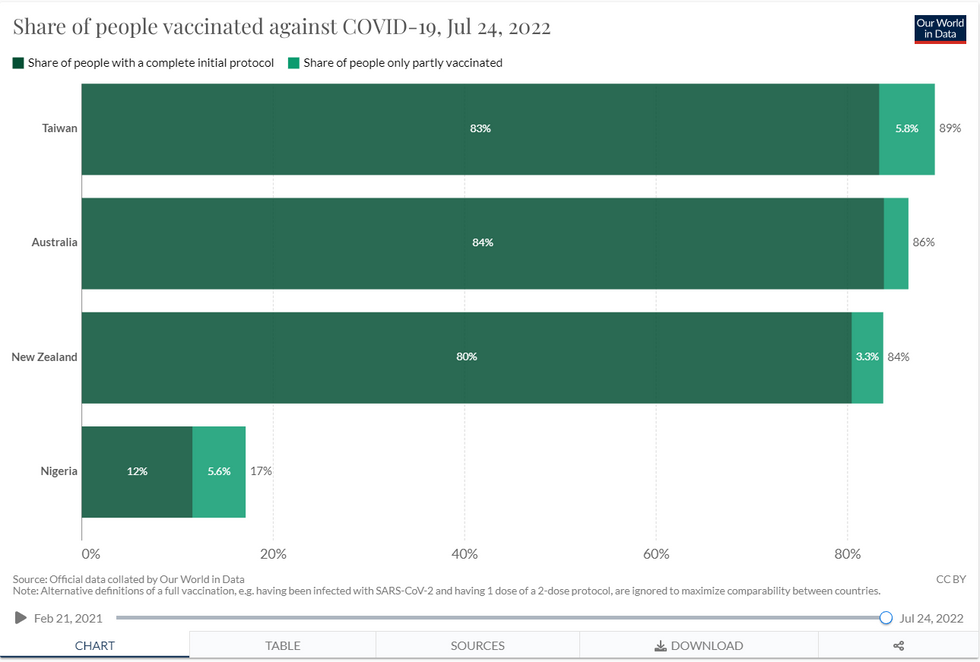 It’s the magic juice! Sadly, the Western world is doing everything it can to push the shots on Africa to ensure that Africans share in the same misery. No control group can be left standing on earth.