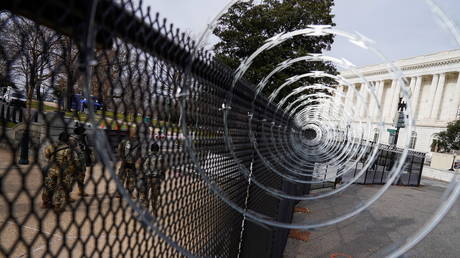 The US House of Representatives won’t be in session on Thursday, after Capitol Police, FBI and Homeland Security said “extremists” were “discussing” possible threats to Congress. The Senate is not changing its schedule, however.

House Speaker Nancy Pelosi (D-California) moved to Wednesday evening the vote on a police reform bill that was scheduled for Thursday. Multiple media outlets reported that the March 4 session of the lower chamber was canceled altogether.

Earlier in the day, US Capitol Police announced it would bolster its security profile due to “intelligence that shows a possible plot to breach the Capitol by an identified militia group on Thursday, March 4.”

Also on rt.com
US police tighten security at Capitol on intel of ‘militia plot’ to breach complex on Thursday

While the Capitol Police said it could not provide any details “due to the sensitive nature of this information,”Axios cited a person present during the briefing saying that the FBI identified the group as the Three Percenters militia.

The Bureau and the Department of Homeland Security issued a joint bulletin about “extremists discussing March 4 and March 6” online, acting DHS intelligence chief Melissa Smislova told the Senate Intelligence Committee, according to CNN.

There is no evidence of a specific threat, however, and the measures are being taken out of an “overabundance of caution,” committee chair Sen. Mark Warner (D-Virginia) told the network. While the House isn’t showing up, the Senate is still scheduled to meet on Thursday and discuss amendments to President Joe Biden’s $1.9 trillion Covid-19 relief bill.

Capitol Police are asking for a 20% budget increase, putting them on par with major cities, so that’s the context of the claims they’re making. Insane their leadership wants to be rewarded for failing to just have more guards on duty that day. https://t.co/m1uqu05OzI

While some congressional Democrats pointed to the schedule change as “heartbreaking” proof that the US government must “look inward [and] root out these conspiracy theories [and] hate-filled ideologies,” as Rep. Tim Ryan (D-Ohio) put it, even sympathetic journalists suggested that the Capitol Police might by hyping up threats to get a budget increase.

Steel fence topped by razor wire was put up around the Capitol after January 6, when a crowd of supporters of then-President Donald Trump broke into the building and interrupted the joint session of Congress as it met to certify Biden’s election victory. One protester was shot and killed by Capitol Police. Democrats denounced the riot as “armed insurrection” and voted to impeach Trump for “inciting” it.

Some 27,000 National Guard troops were deployed to protect the January 20 inauguration from threats the FBI supposedly warned about, which failed to materialize. Several thousand troops still remain in Washington, DC with no timeline for when they might leave. In mid-February, Capitol Police asked to make the fence permanent, claiming there was “chatter” about a March 4 attack by “QAnon” and other extremists online.

Representatives Matt Gaetz (R-Florida) dismissed their concerns as “possible threat construction to justify the ongoing occupation” of Washington, DC. His colleague Tnomas Massie (R-Kentucky) likewise said it was time to “de-occupy” DC, adding, “There is no threat, but the swamp wants to project that image so they can pass new laws to steal your liberty.”

The calls to make the fence permanent were also opposed by DC Mayor Muriel Bowser and Delegate Eleanor Holmes-Norton, both Democrats.

March 4 is supposedly significant because it used to be Inauguration Day for incoming US presidents, until Congress changed it to January 20 in 1933, to speed up the transfer of power to newly elected administrations.