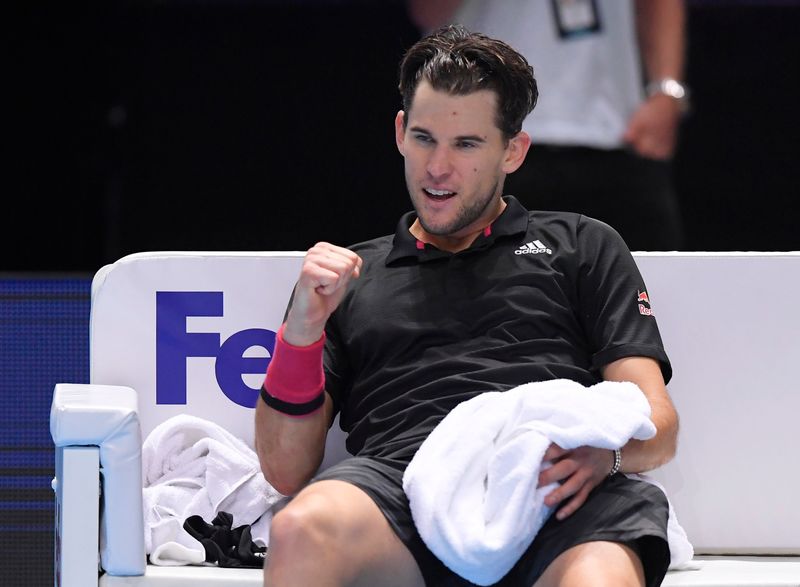 LONDON (Reuters) – Dominic Thiem says he is not yet part of a “Fab Four” at the top of men’s tennis despite becoming only the second player to record five career wins against Roger Federer, Rafa Nadal and Novak Djokovic on Saturday.

After several years spent knocking on the door, the 27-year-old Austrian joined the Grand Slam winners’ club this year when he won the U.S. Open, and at the ATP Finals in London this week he has beaten Nadal and Djokovic.

Thiem said he got lucky against world number one Djokovic in a semi-final lasting almost three hours on Saturday, squandering four match points in the second-set tiebreak, then coming back from 0-4 in the deciding-set breaker to win 7-5 6-7(10) 7-6(5).

The fact that he managed to shrug off the disappointment of double-faulting on one of his match points, then finish the match with a blaze of brilliance to stun Djokovic, speaks volumes for how far he has come.

But the world number three says he has a long way to go to start being bracketed with Nadal and Federer, who have won 20 Grand Slam titles, and Djokovic who has 17 majors to his name.

“Of course not, I’m so far away. I have one Slam and one Masters 1000 title, that’s it,” said the modest Thiem, who beat Nadal on Tuesday in the round-robin stage here.

“But I love to play against them, these living legends.”

Thiem is clearly now established as a major force in the men’s game and winning the year-ender for the first time on Sunday against either Nadal or Russian Daniil Medvedev would be another peak scaled for the man from the ski-mad nation.

“It’s super special (to have five wins each against the big three), and it’s special to have my 300th Tour win today,” Thiem told reporters. “To beat them all five times is something great for me. Every match against them is a privilege and a huge chance to learn, but to beat them is huge confidence boost.”

Three-times Grand Slam champion Andy Murray is the only other player to have beaten Federer, Nadal and Djokovic at least five times each and he also topped the world rankings.

Thiem’s record against Djokovic now stands at 5-7, against Nadal it is 6-9, while he leads Federer 5-2.

Saagar Enjeti: How Should We REALLY Think About Rush Limbaugh’s Legacy?

3 hours ago The Hill

Why DNA is the material of choice for nanorobots

Saagar Enjeti: How Should We REALLY Think About Rush Limbaugh’s Legacy?

3 hours ago The Hill