The Irish coalition government made up of Fianna Fáil, Fine Gael, and the Green Party has seized on the humanitarian crisis generated by the Russia-Ukraine war to intensify efforts to abandon Ireland’s formal neutrality and lead the country into the imperialist war fighting alliance, NATO and related European Union (EU) military structures.

Over 47,000 Ukrainian refugees have now arrived in Ireland. This has emboldened mainstream media efforts to echo the remarks of Ireland’s former Taoiseach and deputy premier Leo Varadkar, who branded Russian premier Vladimir Putin “the Hitler of the 21st century’”. A wave of anti-Russian hysteria has been whipped up, sanctioned by the government and encouraged and egged on by the state broadcasting service RTE.

In April, US puppet and Ukrainian President Volodymyr Zelensky told Ireland’s Dáil (parliament), “Although you are a neutral country, you have not remained neutral to the disaster and to the mishaps that Russia has brought to Ukraine.” 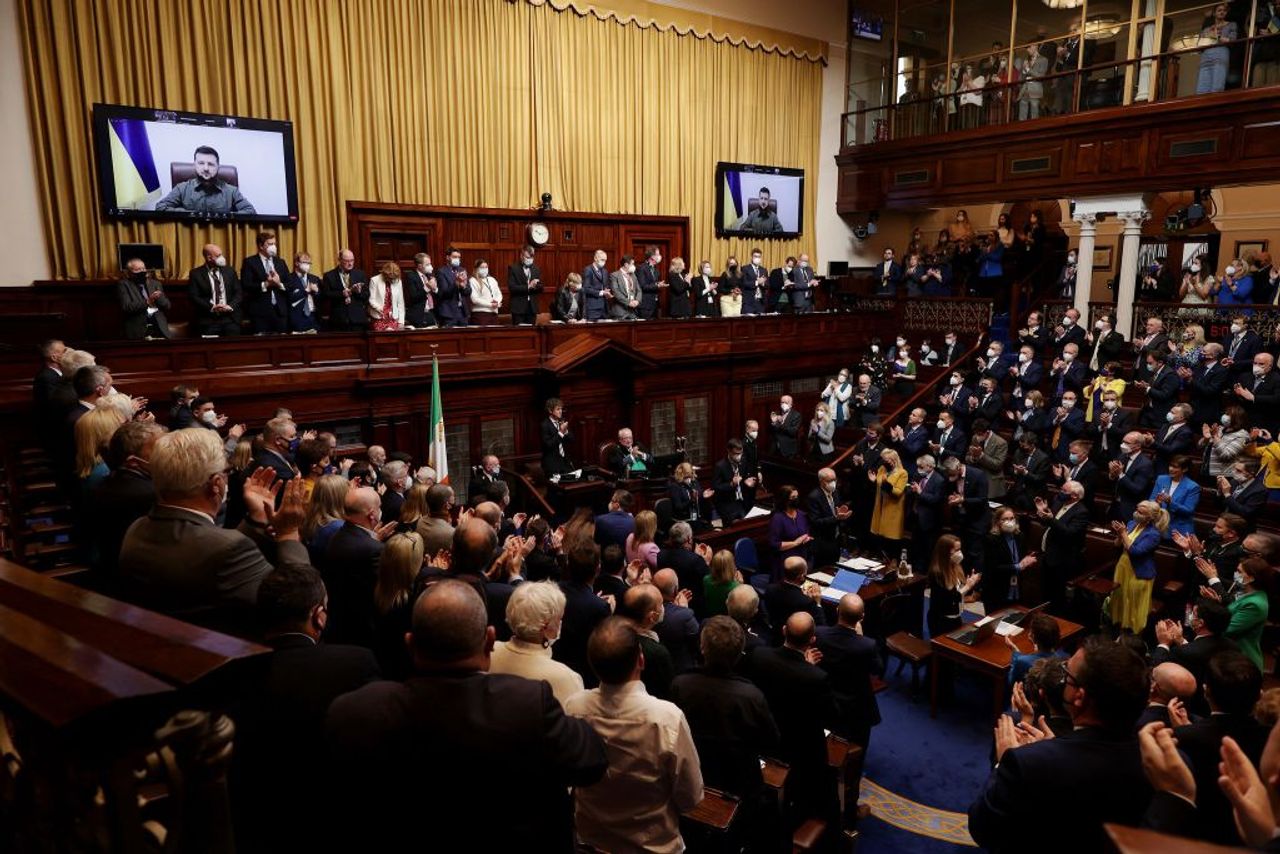 Address by the President of Ukraine, Volodymyr Zelenskyy, at a Joint Sitting of Dáil & Seanad Éireann in Leinster House on April 6, 2022 [Photo by Houses of the Oireachtas/Flickr / CC BY 4.0]

There has been a backlash from right-wing pro-NATO members of the Dáil and media over remarks made by Sabina Higgins, the wife of President Michael D. Higgins, who wrote a letter to the Irish Times at the beginning of August calling for peace talks between Ukraine and Russia. Higgins’ letter enraged those leading the pro-NATO campaign, particularly as her proposal for talks had avoided the requisite anti-Russian rhetoric.

The move to formally abandon neutrality coincides with decisions by Sweden and Finland to join NATO. The Irish shift is part of the massive escalation in efforts by the US and European imperialist powers to encircle Russia and accelerate the drive to all-out war. The Irish ruling elite want to show just how loyal they are to their imperialist allies.

This is in defiance of overwhelming opposition from working people. A recent Irish Times/lpsos poll showed that 66 percent of Irish people do not want any change in Ireland’s current position. Only 24 percent supported change, while 11 percent did not know. Ireland’s currently policy precludes the country from joining any military alliance and requires a United Nations Security Council resolution for Irish troops to be committed abroad.

Popular support for military neutrality is bound up with hostility among Irish workers to the horrors of imperialism. By contrast, the Irish ruling class has for decades employed neutrality as a tactic to advance its own class interests by attempting to use one or other imperialist power as a counterweight to Britain.

The Irish Free State (later the Republic of Ireland) was founded one hundred years ago in 1922 based on crushing all working class demands that went beyond the interests of the Irish bourgeois nationalists. These later founded Fianna Fáil and Fine Gael, still the two main bourgeois parties.

The intention of those who took control of the 26-county state in the South of Ireland, after bloody partition by Britain, and having suppressed the working class, was to keep the South of Ireland subordinate to imperialist interests. The Irish Free State came into existence as a mechanism by which the British ruling class could rely on the weak Irish bourgeoisie to prevent opposition to British domination of the island spilling over into a struggle for socialism in Ireland and Britain itself.

The Free State remained a dominion of the British Commonwealth with the UK remaining in control of marine defence as well as three naval bases known as the “Treaty Ports”—at Berehaven, Loch Swilly and Spike Island.

The Treaty Ports were handed back to the Irish government as part of a 1938 settlement. This followed five years of the Anglo-Irish Economic War in which Eamonn de Valera’s new Fianna Fáil government implemented, at great social cost, protectionist measures against Britain designed to foster Irish capitalism. In consequence, the Irish government remained at least nominally neutral during World War Two, although neutrality in practice had a pro-British bias.

There were limits, however. In 1940 a British delegation floated the possibility of ending partition if the Irish government would fully support the British war effort. De Valera refused, seeking to advance Irish capitalism by balancing between the imperialist combatants. Relations were maintained with Japan and Nazi Germany, while close relations with the US also served as a growing counterweight to British influence.

Ireland eventually joined the United Nations in 1955, having been blocked by the Soviet Union in 1945, although Ireland refused to join NATO due to British membership of the anti-Soviet alliance. The Irish government sought an alliance with the US outside the confines of NATO, but this was refused by Washington. Cooperation was nevertheless continually deepened with the US on security matters.

Ireland’s formal neutrality, and history of brutal national and class oppression, was used by the US and other powers to obscure the barbaric aims of imperialism, particularly in Africa. Between 1960 and 1964, for example, over 6,000 Irish soldiers served in the Congo, in a brutal war following Congolese independence from Belgian colonialism. Subsequent UN deployments saw Irish troops dispatched to many of the world’s poorest countries, including Haiti and Angola, seeking to secure imperialist interests.

By the 1960s, Ireland had abandoned its protectionist experiments, reducing tariff barriers on trade and opening up the economy to US capital and investment. The South became a hub for multinational companies attracted by low taxes and compliant unions. The integration of the ruling elite as junior partners of the imperialists was accelerated by accession to the European Community in 1973. Today more than a thousand large global American companies have operations in Ireland, paying one of the lowest corporation tax rates in Europe at 12.5 percent, and enjoying access to the EU’s huge single market.

Irish integration into Europe also drew Ireland into European and NATO mechanisms. In 1999 Ireland was accepted into NATO’s Partnership for Peace programme (PfP), which serves as a waiting room for NATO membership. Candidate countries are set targets in terms of military organisation, spending and equipment. As of July 2022, Ireland was deemed to have 15 of 27 set goals outstanding.

In 2003, to stress its loyalty to the US, the Fianna Fáil government supported the invasion and occupation of Iraq, assisting US “shock and awe” bombing by offering Shannon Airport in the west of Ireland as a hub and refuelling depot. The invasion resulted in the death of more than a million people and the destruction of an entire society. 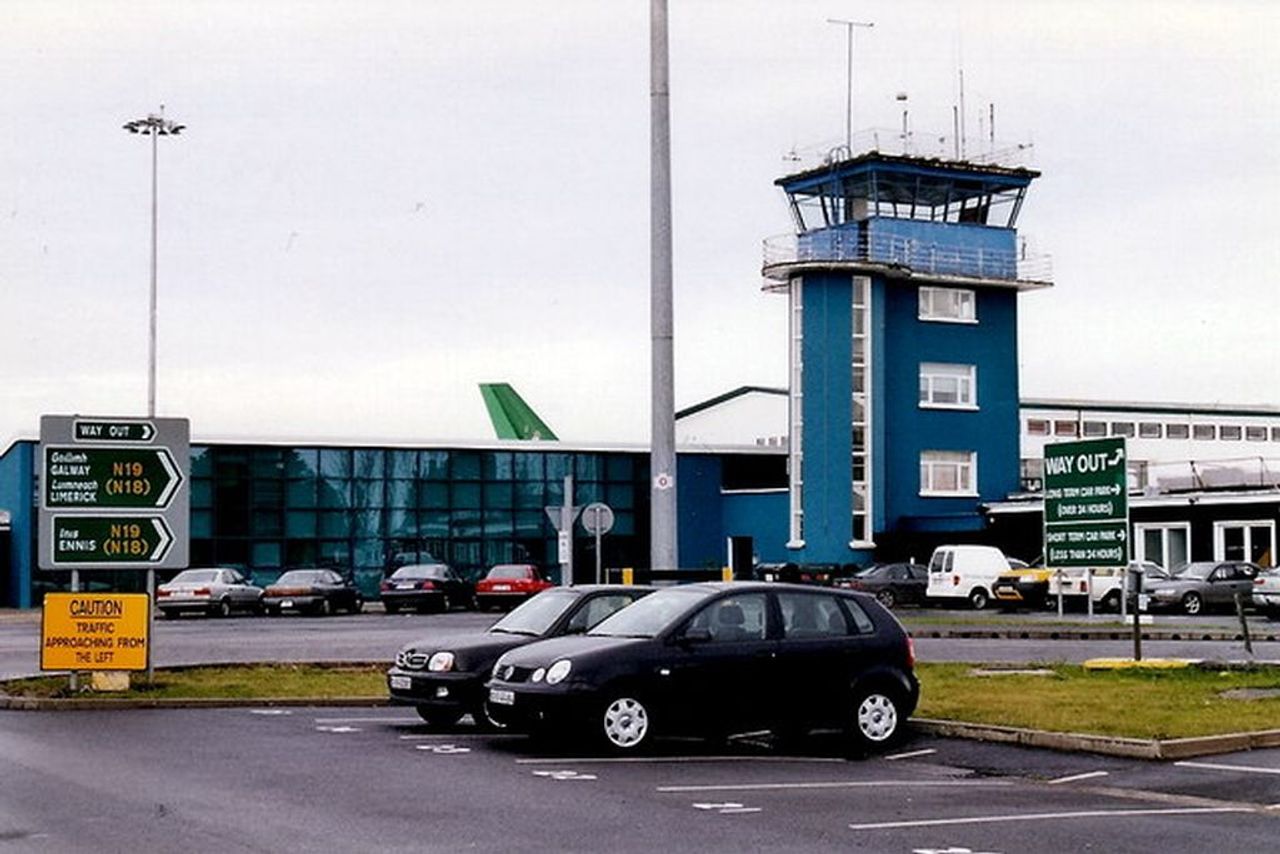 By 2006 the airport became one of the main locations for “rendition flights” carrying prisoners held by the CIA to countries where they were subsequently tortured. Shannon is currently used to refuel daily arms flights to Ukraine.

By June this year, the Irish government was also considering joining the joint NATO/EU hybrid and cyber warfare thinktank based in Helsinki, Finland, and has already joined the NATO Co-operative Cyber Defence Centre of Excellence in Tallinn, Estonia.

Taoiseach Martin has been floating plans to avoid a referendum on NATO membership, which would stand a high chance of losing. In June, Martin declared, “We need to reflect on military non-alignment in Ireland and our military neutrality. We are not politically neutral.” He continued, “We don’t need a referendum to join NATO. That’s a policy decision of government.”

Ireland is also integrating its forces into the EU’s own military apparatus. In 2006, Willie O’Dea, then the Minister of Defence, announced that Ireland would seek to join European Union battle groups. It has subsequently participated in a succession of battle groups involving up to 1,500 troops.

In 2017, the Dáil voted to join the European Union’s Permanent Structured Co-operation (PESCO) Agreement, made up of 25 of the EU’s 27 member states. Thus far, the country has only participated in one of PESCO’s 60 projects. In June, however, the Dáil voted to participate in four more, including work against cyber threats, medical training, disaster relief—“both within and outside EU territory”—and sea mine clearance.

Also driving the ruling elite in Ireland towards NATO militarism is the very real threat from the working class, which has seen living standards plummet and poverty increase.

More than 781,794 people are experiencing deprivation in Ireland, with 660,000 people now living in poverty, of which 210,000 are children. Over 133,000 people living in poverty are in employment. According to the latest data produced by Eurostat, energy prices have risen by 39.1 percent in the past twelve months, driving overall yearly price inflation to 7.3 percent.

The housing and rental crisis has extended its shadow over the whole country, particularly in larger towns and cities. The latest figures released by the Department of Housing show that the number of homeless people increased in June to 10,492, up more than a quarter on the same period last year. The number of homeless families has now increased to 1,385 and there are over 3,000 children homeless. The NATO-Russian war crisis serves to divert class tensions against an “external foe.”