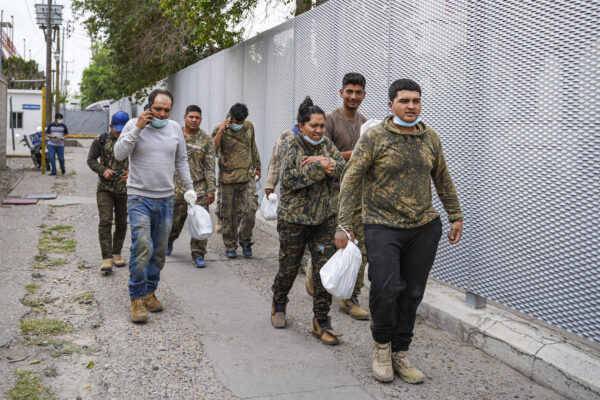 A federal judge on Tuesday blocked immigration authorities from using Title 42, a Trump-era policy used to swiftly turn away millions of illegal immigrants at the southern border on public health grounds amid the COVID-19 pandemic.

The Title 42 border policy was invoked in March 2020 and enabled border authorities to quickly expel illegal immigrants at the border back to Mexico if they were deemed to pose a health threat amid the pandemic.

The policy by the Centers for Disease Control and Prevention (CDC) continued under President Joe Biden.

However, Judge Emmet Sullivan of the U.S. District Court for the District of Columbia on Tuesday ruled in a 49-page opinion (pdf) that the use of the policy is “arbitrary and capricious” under the Administrative Procedure Act (APA) and that it violated the act because the CDC “failed to adequately consider alternatives and the policy did not rationally serve its stated purpose.”

The judge also noted the CDC’s “decision to ignore the harm” that could be caused by the policy was also “arbitrary and capricious” and violated the APA.

“It is unreasonable for the CDC to assume that it can ignore the consequences of any actions it chooses to take in the pursuit of fulfilling its goals, particularly when those actions included the extraordinary decision to suspend the codified procedural and substantive rights of noncitizens seeking safe harbor,” Sullivan wrote in his opinion.

Sullivan also criticized the CDC for failing to “articulate a satisfactory explanation” as to why alternative measures such as increased COVID-19 vaccinations, “outdoor processing, and all other available public health measures” were not feasible.

The Biden administration attempted to end Title 42 removals this year but was blocked from doing so when a Louisiana federal judge ruled in favor of Republican-led states who had sought an injunction to keep the policy in place in a lawsuit.

In response to Tuesday’s ruling, the Department of Justice filed an unopposed stay motion Tuesday night (pdf), requesting a temporary five-week stay of the court’s order to allow DHS time to transition Title 42 to Title 8 processing.

The plaintiffs agreed to the request, according to court documents, but ultimately Sullivan will have the final say.

Tuesday’s ruling was the result of a 2021 lawsuit filed by the American Civil Liberties Union (ACLU), which argued that Title 42 restricted immigration at the border based on an “unprecedented and unlawful invocation of the Public Health Service Act” and that the Trump administration implemented the policy “in violation of longstanding immigration statutes requiring that asylum seekers receive a full and fair proceeding to determine their right to protection in the United States.”

In a statement on Tuesday, the ACLU praised Sullivan’s decision, calling it a victory.

“This is a huge victory and one that literally has life-and-death stakes,” said ACLU attorney Lee Gelernt, the lead lawyer in the Title 42 challenge. “We have said all along that using Title 42 against asylum seekers was inhumane and driven purely by politics. Hopefully, this ruling will end this horrific policy once and for all.”

Sullivan’s ruling comes after Republican lawmakers on Tuesday pressed Homeland Security Secretary Alejandro Mayorkas to step down from his role amid a mass immigration crisis at the U.S.–Mexico border.

Mayorkas said he has no plans to resign, just days after U.S. Customs and Border Protection Commissioner Chris Magnus stepped down after dozens of House Republicans called for him to do so in a letter sent to President Joe Biden.

Katabella Roberts is a news writer for The Epoch Times, focusing primarily on the United States, world, and business news.