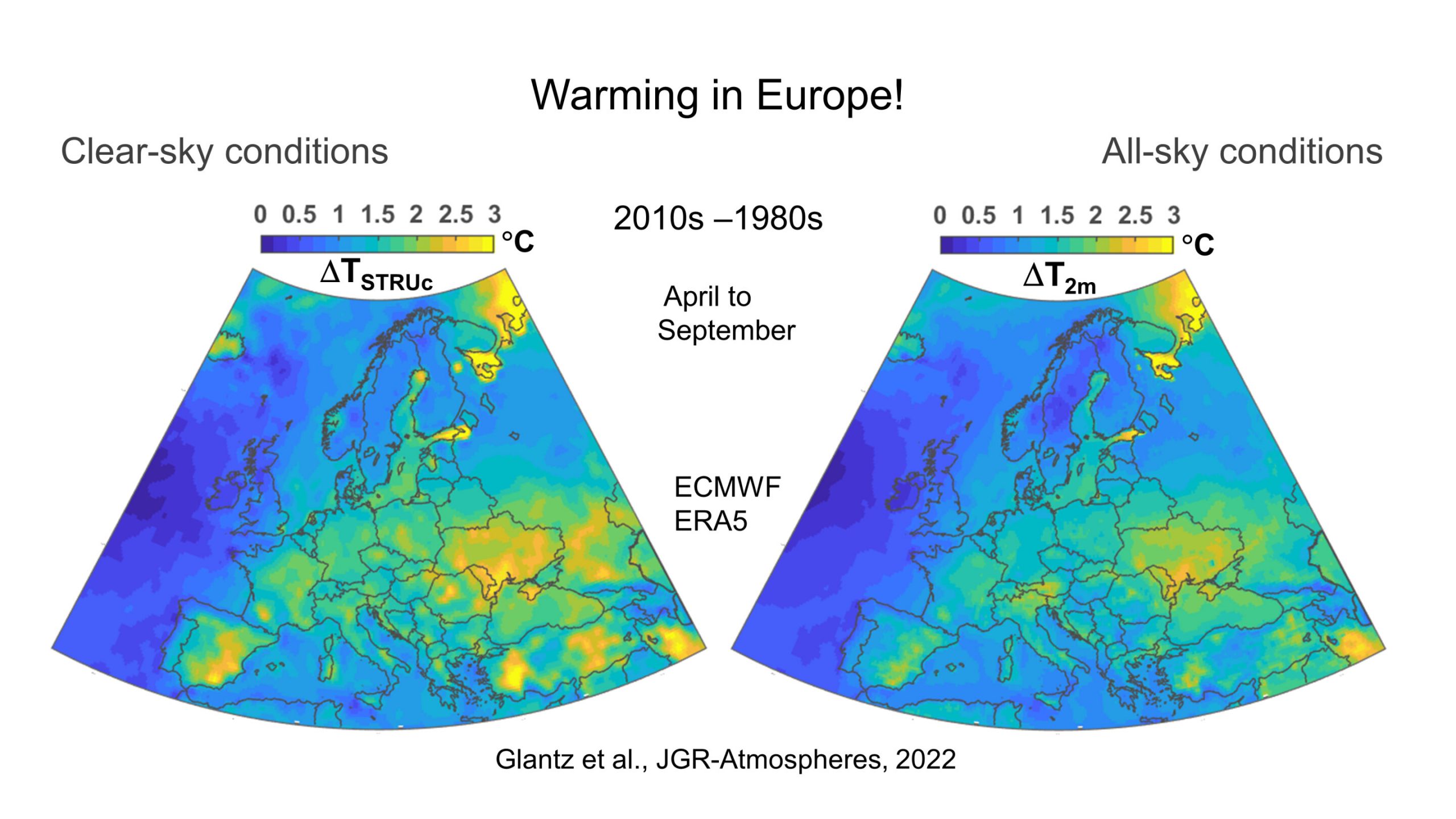 The warming during the summer months in Europe has been much faster than the global average, according to a new study by researchers at Stockholm University published in the Journal of Geophysical Research: Atmospheres. As a consequence of human emissions of greenhouse gases, the climate across the continent has also become drier, particularly in southern Europe, leading to worse heat waves and an increased risk of fires.

According to the UN’s Intergovernmental Panel on Climate Change (IPCC), warming over land areas occurs significantly faster than over oceans, with 1.6 degrees and 0.9 degrees on average, respectively. It means that the global greenhouse gas emissions budget to stay under a 1.5-degree warming on land has already been used up.

“Climate change is serious as it leads to, among other things, more frequent heat waves in Europe. These, in turn, increase the risk of fires, such as the devastating fires in southern Europe in the summer of 2022,” says Paul Glantz, Associate Professor at the Department of Environmental Science, Stockholm University, and main author of the study. In southern Europe, a clear, so-called, positive feedback caused by global warming is evident, i.e. warming is amplified due to drier soil and decreased evaporation.

Moreover, there has been less cloud coverage over large parts of Europe, probably as a result of less water vapor in the air.

“What we see in southern Europe is in line what IPCC has predicted, which is that an increased human impact on the greenhouse effect would lead to dry areas on Earth becoming even drier,” says Paul Glantz.

The study also includes a section about the estimated impact of aerosol particles on the temperature increase. According to Paul Glantz, the rapid warming in, for example, Central and Eastern Europe, is first and foremost a consequence of the human emissions of long-lived greenhouse gases, such as carbon dioxide. But since emissions of short-lived aerosol particles from, for example, coal-fired power plants have decreased greatly over the past four decades, the combined effect has led to an extreme temperature increase of over two degrees.

“The airborne aerosol particles, before they began to decrease in the early 1980s in Europe, have masked the warming caused by human greenhouse gases by just over one degree on average for the summer half-year. As the aerosols in the atmosphere decreased, the temperature increased rapidly. Human emissions of carbon dioxide are still the biggest threat as they affect the climate for hundreds to thousands of years,” says Paul Glantz.

According to Paul Glantz, this effect provides a harbinger of future warming in areas where aerosol emissions are high, such as in India and China.

The greenhouse effect and aerosol effect

Fossil burning leads to the release of both aerosol particles and greenhouse gases. Although their source is common, their effects on climate differ.

Greenhouse gases are generally long-lived in the atmosphere and this applies above all to carbon dioxide where human emissions affect climate for hundreds to thousands of years. It also means that greenhouse gases spread evenly over the entire planet.

In contrast to greenhouse gases, aerosol particles affect incoming solar radiation, i.e. they scatter part of the sunlight back into space causing a cooling effect. Human emissions of aerosols can enhance this cooling effect.

Airborne human aerosol particles have a lifetime of about a week, which means that they mainly cool the climate locally or regionally and in the short term.

According to the Paris Agreement, all parties must commit to drastically reduce their greenhouse gas emissions, but it is also important to decrease concentrations of aerosol particles as well because, in addition to their effects on climate, aerosol particles in polluted air cause approximately eight million premature deaths each year around the world.


Citation:
Large parts of Europe are warming twice as fast as the planet on average (2022, November 22)
retrieved 22 November 2022
from https://phys.org/news/2022-11-large-europe-fast-planet-average.html

An easy way for dairy farmers to reduce their climate impact

Any ideas on this spider filament?