Learning how to count in German is a fun and easy start to learning German. Numbers are an essential part of the vocabulary and can pop up in conversation more often than you think. Whether you are counting pretzels, buying beers for your drei (‘three’) friends, or giving someone your phone number, German numbers will always come in handy while in a German-speaking country.

Besides, contrary to the popular belief that German is hard to learn, German numbers are actually easy to master. In fact, it’s just as easy to learn how to count in German as it is in English. Once you know how to count to 20, the rest of the numbers will follow a predictable pattern. So here’s an uncomplicated guide on how to count from 1 to 100 in German.

Let’s start at the very beginning. If you want to master the German numbers fast, it’s essential to first learn how to count to 10 in German. The numbers from 1 to 10 are important for two reasons. First: you will probably use them on a daily basis. And second: they set the stage for any German number you can think of.

If you are not familiar with the German pronunciation rules, you can watch this short video to hear how each number from 1 to 10 is pronounced:

As it happens with several other languages, the numbers from 11 to 20 don’t yet follow the pattern we talked about. The same as in English, ‘eleven’ and ‘twelve’ are two rebels refusing to follow the crowd. Otherwise, all the other numbers are formed by bringing together the first four letters of the basic 3 to 9 numbers and the word zehn meaning ‘ten’.

The next step in learning how to count in German is mastering the tens or the multiples of 10. Once you know these, you be able to apply the pattern and easily count to 100 on your own. It’s as easy as eins, zwei, drei!

Here are the multiples of 10 in German:

As you can see, even the tens follow a pattern. Apart from twenty and thirty which are exceptions, the tens from forty to ninety are formed by adding “zig” at the end of the first four letters of the numbers from 4 to 9. 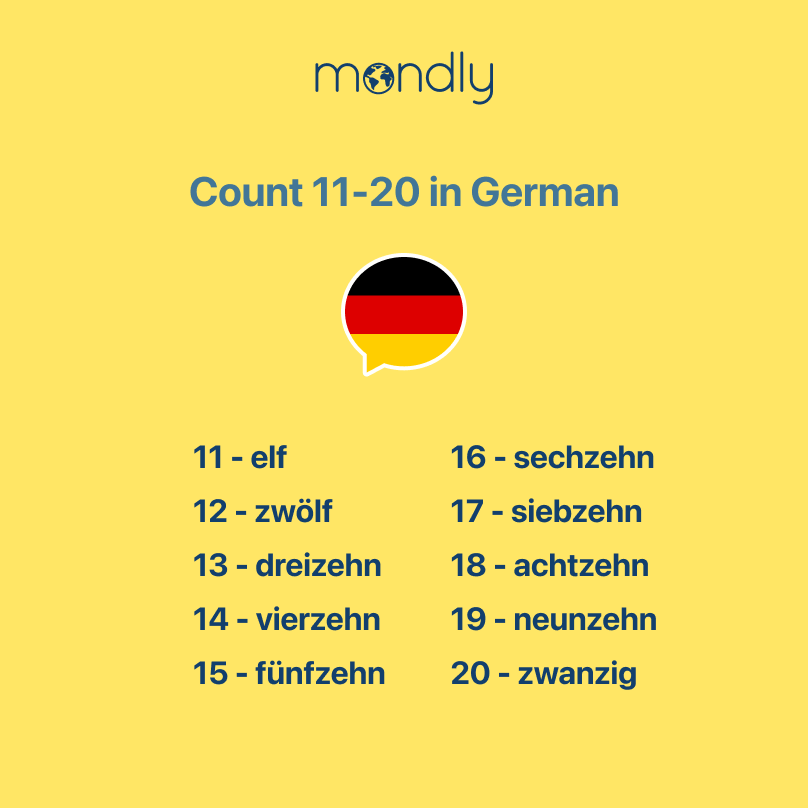 Now that you have all the data (the numbers from 1 to 20 and multiples of 10), it’s time to explain how all the other numbers are formed. If you already know how to count in other languages, German numbers will be a piece of cake for you!

The only difference from English is that German puts the ones before the tens. Therefore, instead of saying “eighty-two”, you’ll say zweiundachtzig – literally “two-and-eighty”. Let’s add some dashes to make it easier to read and look at the word again: zwei-und-achtzig.

The und in the middle stands for “and”. Makes sense, right?

Now let’s look at some examples to make sure you got it:

German is famous for its long compound words, so larger numbers can get a bit overwhelming. Don’t worry though! Adding dashes or spaces will always make them easier to read.

Don’t forget that practice makes perfect, so next time you can’t fall asleep, counting sheep in German might be a good idea.

Do you want to go beyond numbers and speak German fluently? Try Mondly, the award-winning language app that is serious about making learning German fun.

Instead of tiring yourself for hours with inch-thick textbooks, slip a 10-minute Mondly lesson into your routine and make learning a breeze. You will learn German naturally using:

The 4 types of enemies (and how to defeat them)