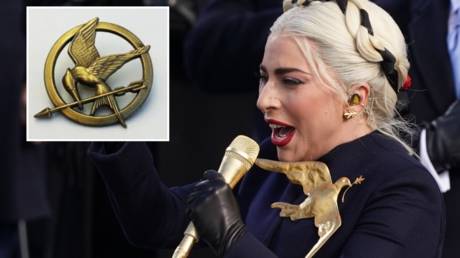 President Joe Biden’s inauguration ceremony has triggered countless comparisons to ‘The Hunger Games,’ as viewers found eerie parallels to the sci-fi flick, whose dystopian themes are a far cry from the new POTUS’ “unity” message.

While pop star Lady Gaga helped to kick off Biden’s swearing-in on Wednesday afternoon with a performance of the national anthem, observers appeared more enthralled with her oversized broach. Netizens immediately likened the pin to the iconic ‘Mockingjay’ of Hunger Games fame – the symbol of the film’s fictitious rebellion against the despotic ‘Capitol.’

I’ve got it. Lady Gaga is wearing the mockingjay pin to symbolize the commencement of our own Hunger Games. In the books, the Games are a punishment for the districts after they attacked the Capital.And what happened two weeks ago in America?An attack on the Capitol. pic.twitter.com/hi9GDx0V0X

The uncanny resemblance was not lost on the film’s official Twitter handle, which joked “we’re missing one of our mockingjay pins, has anybody seen it?”

we’re missing one of our mockingjay pins, has anybody seen it?

Though the singer earlier clarified that the pin is, in fact, a “dove carrying an olive branch,” that did little to stem the comparisons to the film – in which the ruling Capitol forces youths to fight to the death each year in a bloody battle royale, a punishment for a failed revolution by the movie’s 12 oppressed ‘districts.’

Also on rt.com
The ‘democracy’ and ‘unity’ of Biden’s inaugural address have fine print: ‘After dissent is silenced’

“The districts are the body. The Capitol is the beating heart. Your hard work feeds us, and in return we feed and protect you. But if you resist the system and starve yourselves, it is you who will bleed,” Snow says in the third installment of the film series as a warning against rebellion – also referred to as the “dark days” in the movie, perhaps not far off from Biden’s prediction of a “dark winter” amid the Covid-19 pandemic.

The ‘Hunger Games’ parallels were not the only time life imitated art during Wednesday’s inauguration event, with netizens also finding likeness to franchises from ‘Star Wars’ to ‘Game of Thrones.’

Gov Funded Transgender Surgery for Kids?! – A Week In News