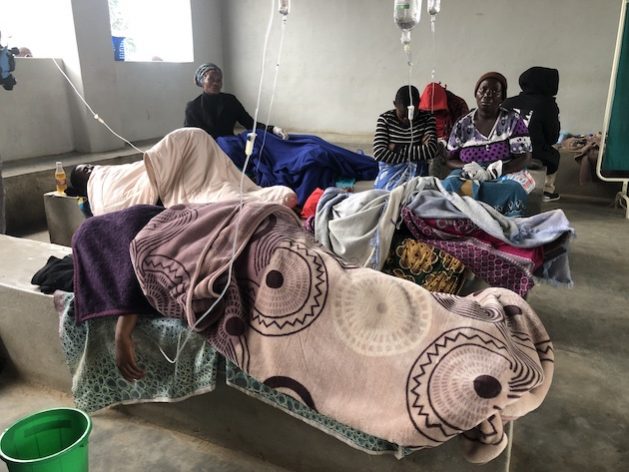 BLANTYRE, Jan 09 (IPS) – On March 3, 2022, Malawi declared a cholera outbreak after a district hospital in the southern region reported a case. This was the first case in the 2021 to 2022 cholera season.

That single case was a warning for what would become Malawi’s worst cholera outbreak in decades.

For nearly a year now, cholera has gripped the country, with cases reported in all 29 districts and rising.

In an unprecedented occurrence, the cases rose sharply even through the summer months when cholera is least expected and the country least prepared for it.

As of January 4, 2023, up to 640 people were killed, and 19,000 cases were registered, government data shows. The case fatality rate stands at 3.4 percent, higher than the recommended rate of less than one percent.

Maziko Matemba, Executive Director for Health and Rights Education Programme (HREP), a local civil society organisation, says the situation is alarming and keeps the country in a “spiral of health crisis”.

“We started the year 2022 hoping to recover from the devastation of Covid-19. Then Tropical Storm Ana knocked us back in January. In March, cholera hit, and it hasn’t left for ten months, worsening as time passes. We have not had this kind of cholera outbreak for a long time,” Matemba tells IPS.

And there are growing fears that the disease could spread further now that the rainy season when it usually breaks out in Malawi, has begun.

A final situation report on the impact of the storm by the Department of Disaster Management Affairs found that over 53,000 latrines collapsed, while 337 boreholes, 206 water taps and eight gravity-fed water schemes were damaged in those 16 districts.

The department said this resulted in low sanitation coverage, limited access to safe water and poor hygienic practices, with some sites and communities reporting open defecation and contamination of the few available water sources.

The report said the situation increased the risk of cholera and other communicable diseases.

But Malawi has not fully recovered from this disaster since, Matemba says.

“So lack of recovery on water and sanitation infrastructure destroyed during that time have created good conditions for cholera to thrive. That comes into an existing frame of a weak prevention system. We usually take prevention rather casually,” he says.

Save Kumwenda, an environmental health expert, says alongside the water, sanitation and hygiene issues, there is also evidence of temperature and precipitation being influential in cholera outbreaks – with temperature driving epidemics and rainfall acting as a dispersal mechanism.

“Then there are also socio-economic conditions which are key drivers for outbreaks, as these increase pathogen exposure,” says Kumwenda, an associate professor at the Malawi University of Business and Applied Sciences (MUBAS).

He says the situation could worsen as the rainy season spreads the bacteria through contamination of water bodies and food.

The outbreak has hit the hardest Malawi’s two major cities of Lilongwe, the capital city, and Blantyre, the commercial city.

Kumwenda says this is the case because the two cities, struggling with solid waste management and aged sewer systems, have large peri-urban areas where residents depend on wells, boreholes and river water which is highly contaminated by faecal matter from toilets, broken septic tanks, broken sewer pipes and open defaecation.

He says most houses in these areas do not have adequate toilets, and many depend on sharing.

“The other reason for the high numbers of cholera cases in these cities is the high number of people who rely on piece works, and these rely on foods sold in markets where hygiene and sanitation conditions are compromised,” he says.

In response, the government has delayed by two weeks the opening of schools in the two cities and surrounding areas. Malawi opened the 2022 academic year on January 3.

Minister of Health Khumbize Kandodo Chiponda says in a statement that opening schools in the two cities would affect containment efforts for the outbreak, considering that cholera is passed from one person to another through contaminated food, water and inadequate sanitation facilities, a feature that exists in school settings.

“The converging of learners, especially in the nursery, primary and secondary schools, increases the chances of uncontrolled spread of the vibrio bacteria that causes cholera disease,” she says.

During the two weeks delay, the government will be conducting a thorough assessment and improving the water and sanitation situation in the schools in both cities.

For a national response, among other measures, the government says it will be opening more treatment centres in the cholera hotspots, employing more staff in the treatment centres, intensifying hygiene promotion and undertaking water quality assessments in targeted areas.

Kumwenda says Malawi needed to act quickly to stop the outbreak before the onset of the rainy season as there was clear evidence of the impending emergency due to the rising of the cases through the hot months.

But for long-term control of the disease, Malawi needs to invest in research in order to come up with interventions based on evidence.

“This will ensure that we always invest in interventions which yield maximum benefits. We need to understand the main drivers of the epidemic and also identify reservoirs of the bacteria causing cholera. The knowledge of the reservoirs will help us to easily prevent the re-occurrence of the outbreak,” says Kumwenda, president of the Malawi Environmental Health Association, a group of environmental health experts.