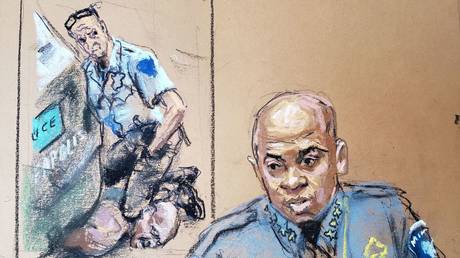 Former Minneapolis cop Derek Chauvin broke with department policy during the fatal arrest of George Floyd, the city’s police chief said, joining other officers who argued the neck restraint he used was not part of his training.

Testifying on the sixth day of Chauvin’s murder trial, Police Chief Medaria Arradondo said the former officer “absolutely” violated MPD policy when he kneeled on Floyd’s neck for more than nine minutes during a botched arrest last May. Floyd was suspected of using a counterfeit $20 bill.

“It’s not part of our training, and it is certainly not part of our ethics and our values,” Arradondo said on Monday, adding that the officers’ use of force should have ended “once Mr. Floyd stopped resisting,” and especially after he “was in distress and verbalized it.”

I vehemently disagree that that’s the appropriate use of force for that situation.

Though the chief argued it was reasonable for Chauvin and the other officers to try to get Floyd “under control” at the beginning of the encounter, he said that should have happened “in the first few seconds” only. He added that the officers failed to “de-escalate” the situation after that point, even as Floyd became unresponsive, and that they did not render timely first aid as mandated by department policy.

“And clearly when Mr. Floyd is no longer responsive and motionless, to continue to apply that level of force to a person proned out, handcuffed behind their back. That in no way shape or form is backed by policy,” he said.

Within a day of Floyd’s death, Arradondo fired Chauvin and the three other officers present for the arrest and has since been highly critical of their conduct, saying in a statement last year “This was murder – it wasn’t a lack of training.”

The chief’s testimony cuts against a main plank of Chauvin’s defense. While the former officer’s lead attorney Eric Nelson has argued Chauvin “did exactly what he had been trained to do over the course of his 19-year career,” both Arradondo and MPD inspector Katie Blackwell, who previously ran the department’s training program, testified otherwise on Monday.

Asked whether the neck restraint used on Floyd is a “trained technique,” Blackwell answered “It is not,” explaining that while the department does teach officers certain types of neck holds, the kneeling position employed by Chauvin is not among them.

“I don’t know what kind of improvised position that is. That’s not what we train,” said Blackwell, who noted she has known Chauvin for going on two decades.

Minneapolis Police Inspector Katie Blackwell, the former training director who has known Chauvin for two decades, just looked at a picture of Chauvin kneeling on George Floyd. “I don’t know what kind of improvised position that is. That’s not what we train.” @kare11pic.twitter.com/sUHDFNnhd3

On cross-examination, defense lawyer Nelson attempted to downplay the chief’s expertise, getting him to acknowledge that it had been “many years” since he personally made an arrest. While Nelson suggested Chauvin and the other officers may have feared an attack from hostile bystanders present during the arrest, Arradondo said that would not have warranted a greater use of force.

The defense also attempted to cast doubt on whether Chauvin used a neck restraint at all, presenting body camera footage that appeared to show the officer’s knee on Floyd’s shoulder blade instead.

“Would you agree that from the perspective of Officer [J. Alexander] Kueng’s body camera it appeared Officer Chauvin’s knee was more on Mr. Floyd’s shoulder blade?” Nelson asked.

“Yes,” Arradondo replied – though later added that in his review of the footage and evidence, he had seen Chauvin’s knee on Floyd’s neck repeatedly. The prosecution was also quick to argue that Nelson’s clip showed Floyd well into the encounter, after the ambulance had arrived, and omitted much of the time he was restrained on the ground.

The emergency physician who treated Floyd on the day of his arrest, Dr. Bradford Langenfeld, offered another potential blow to Chauvin’s defense. While his attorneys maintain Floyd’s death was caused by a combination of preexisting health conditions and fentanyl, a powerful synthetic opioid found in his system, Langenfeld said he observed no clear signs of a drug overdose, explaining that oxygen deficiency, or asphyxia, was “one of the more likely possibilities.”

The emergency room doctor who took over George Floyd’s care at the Hennepin County Medical Center testified at the trial of former police officer Derek Chauvin that he did not suspect a drug overdose as Floyd’s cause of death https://t.co/6F0WqvIJ68pic.twitter.com/yuHrtFrs3k

However, pressed by Nelson, the doctor agreed that fentanyl could also lead to the low oxygen levels found in Floyd’s blood. Though his death was ruled the result of cardiac arrest, the immediate cause remains unclear, becoming a key issue in Chauvin’s trial.

Prosecutors previously argued that Floyd was a habitual opioid user and had developed a sufficient tolerance to fentanyl that the dose present in his blood would not have killed him, but Nelson challenged that notion on Monday.

“Simply because someone has a history of chronic opioid abuse, does that mean fentanyl can’t kill them?” he asked Langenfeld. “No,” the doctor replied.

The ER doctor also noted that “excited delirium” was unlikely in Floyd’s case, saying he did not show common symptoms, including extreme agitation and profuse sweating. In body camera footage from Floyd’s arrest, at least one officer is heard suggesting he was suffering from the condition.

Chauvin’s trial kicked off last Monday and is expected to run for weeks. He faces charges of second- and third-degree murder, as well as second-degree manslaughter, to which he has pleaded not guilty. The case has triggered widespread protests, rioting and civil unrest around the US since Floyd’s death last May, continuing this week outside the courthouse in Hennepin County, where activists have gathered for a prolonged demonstration.