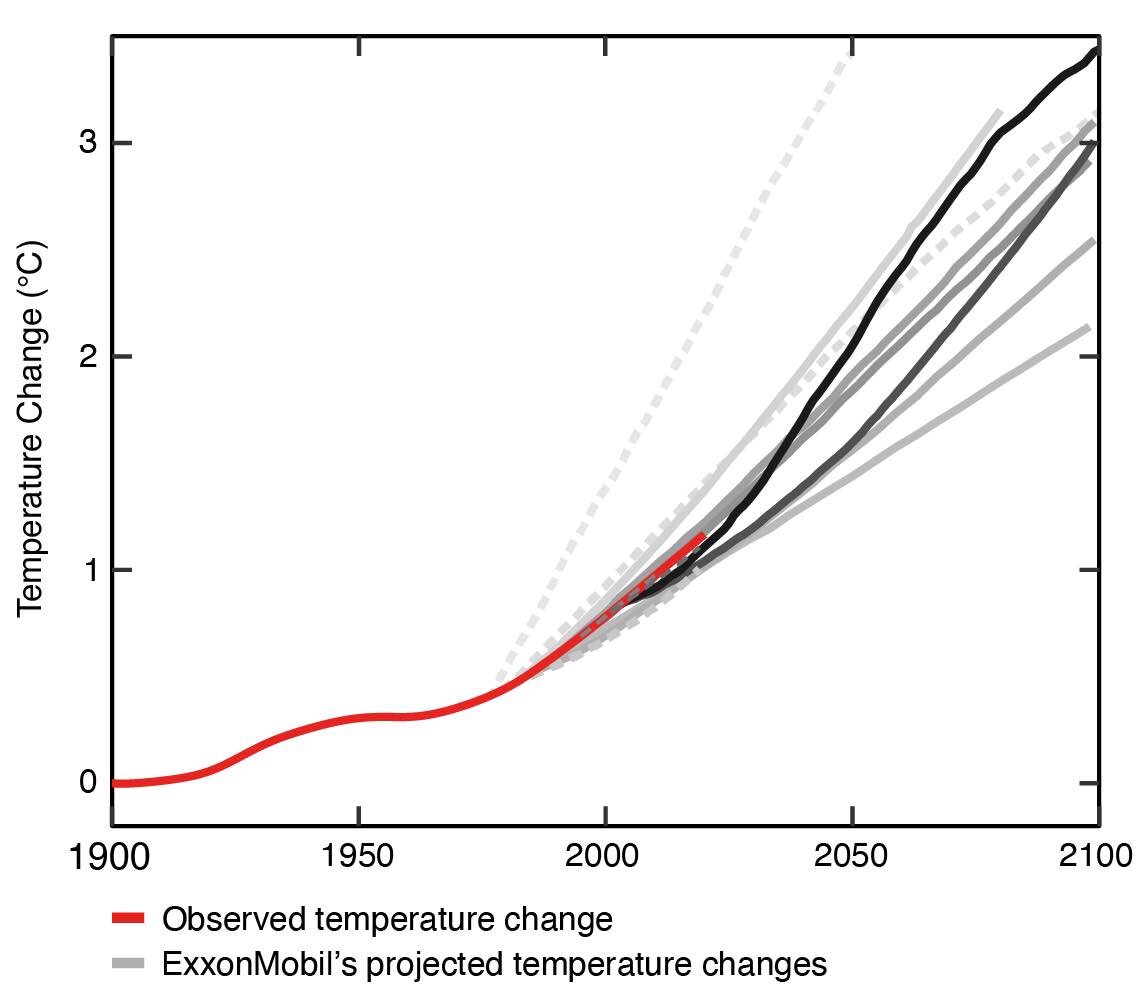 Climate projections reported by ExxonMobil scientists between 1977 and 2003 were accurate and skillful in predicting subsequent global warming and contradicted the company’s public claims, a new Harvard study shows.

In the first ever systematic assessment of the fossil fuel industry’s climate projections, researchers at Harvard University and the Potsdam Institute for Climate Impact Research have put a number on what ‘Exxon knew’ decades ago about climate science: that fossil fuel burning would lead to 0.20 ± 0.04 degrees Celsius of global warming per decade.

The findings, published in the peer-reviewed journal Science and summarized by a single chart displaying every global warming projection reported by Exxon and ExxonMobil Corp scientists between 1977 and 2003, are based on statistical analyses of never-previously reported data buried in the company’s own documents.

Although it has been widely reported that Exxon has known about the threat of global warming since the 1970s, this study is the first quantitative review of the company’s early climate science. Previous research focused on Exxon’s inconsistent internal and external rhetoric on climate change. This report dives into company data revealing that the company knew how much warming would occur with startling accuracy.

The study finds that “Exxon and ExxonMobil Corp also correctly rejected the prospect of a coming ice age, accurately predicted when human-caused global warming would first be detected, and reasonably estimated the ‘carbon budget’ for holding warming below 2°C. On each of these points, however, the company’s public statements about climate science contradicted its own scientific data.”

The study adds weight to ongoing legal and political investigations into ExxonMobil.

“These findings corroborate and add quantitative precision,” the authors write, “to assertions by scholars, journalists, lawyers, politicians, and others that ExxonMobil accurately foresaw the threat of human-caused global warming, both prior and parallel to orchestrating lobbying and propaganda campaigns to delay climate action, and refute claims by ExxonMobil Corp and its defenders that these assertions are incorrect.”

“This is the nail-in-the-coffin of ExxonMobil’s claims that it has been falsely accused of climate malfeasance,” commented lead author and Harvard University Research Associate Geoffrey Supran (Supran began as an Associate Professor of Environmental Science and Policy at the University of Miami’s Rosenstiel School of Marine, Atmospheric, and Earth Science Jan 2023). “Our analysis shows that ExxonMobil’s own data contradicted its public statements, which included exaggerating uncertainties, criticizing climate models, mythologizing global cooling, and feigning ignorance about when—or if—human-caused global warming would be measurable, all while staying silent on the threat of stranded fossil fuel assets.”

The paper’s Acknowledgments state that this research was supported by Harvard University Faculty Development Funds and by the Rockefeller Family Fund.


Citation:
New study puts a number on what ‘Exxon knew’ decades ago about climate science (2023, January 12)
retrieved 16 January 2023
from https://phys.org/news/2023-01-exxon-knew-decades-climate-science.html