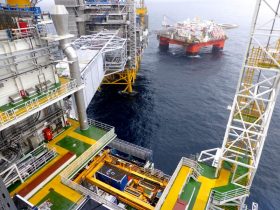 TOKYO (Reuters) – Oil prices eased on Friday, slipping at the end of a week of big gains made on the risk that supplies from Norway could be slashed by up to 25% due to a strike by oilworkers.

Both contracts are on track for gains of around 10% this week – the first rise in three weeks – as prices rallied in response to Norwegian oil workers taking strike action.

Norwegian oil company and labour officials said they will meet with a state-appointed mediator on Friday in an attempt both sides hope will bring an end to a strike.

Elsewhere, market watchers are also bracing for the impact on U.S. production of Hurricane Delta, forecast to strike the Gulf Coast within hours. Nearly 1.5 million barrels of daily output has been halted so far.

“Non-OPEC production is going to take a big hit over the next couple of weeks and this will continue to drive the rebalancing of the oil market,” said Edward Moya, senior market analyst at OANDA.

The Secretary General of the Organization of the Petroleum Exporting Countries (OPEC), Mohammad Barkindo, said on Thursday the worst was over for the oil market, following a price and demand collapse this year due to the coronavirus pandemic.

CDC: We Can Do This VACCINATION INDUCEMENTS

Will Something Else Come Before a Central Bank Digital Currency?