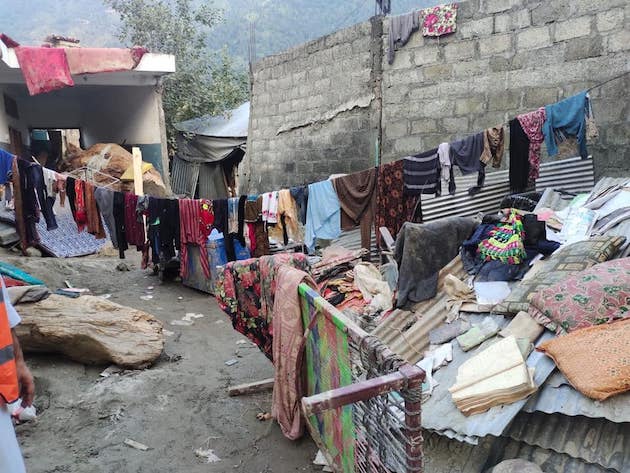 PESHAWAR, Jan 13 (IPS) – People in flood-affected areas of Pakistan have welcomed the pledges at an UN-sponsored donor conference in Geneva on January 9 but want to see an immediate cash flow to facilitate their journeys toward normalcy.

“We need immediate assistance because we have lost all our belongings in floods. My 14-year-old son and 12-year-old daughter died when our mud-built house caved in. For the past six months, 12 members of our family have lived in a tent,” Altaf Shah, a daily wager in the Sukkur district of Sindh province, told IPS.

Shah, 51, said he heard from people about the assistance announced at the UN and hoped his house would be reconstructed.

In June 2022, Pakistan suffered huge losses due to torrential rains, which killed 1,200 people, including 399 children. One-third of the country was submerged, prompting the United Nations to appeal for assistance.

On January 9, more than $10bn was pledged by international financial institutions, donor agencies, and development partners for flood-affected areas’ rehabilitation, recovery, and reconstruction.

Gohar Ahmed, a political analyst at the Quaid-i-Azam University Islamabad, wants the fair distribution of the amount among the affected population.

“Still thousands of people are without homes, food, and medicines. They require immediate help,” Ahmed said. According to him, the heavy downpours, described as an “unprecedented climate catastrophe,” has shattered the population.

He said that Pakistanis aren’t bothered about loans or grants but the reconstruction process in all sectors.

Ahmed said that the government should devise a transparent mechanism to distribute funds among the people still haunted by the flood’s aftermath.

Health economists told IPS that UN agencies and USAID have already been working with the government to restore healthcare services. WHO, UNICEF, UNFPA, and other international organizations were in the field during the floods and their aftermath.

Prime Minister Shehbaz Sharif told Resilient Pakistan Conference about the country’s Resilient Recovery, Rehabilitation, and Reconstruction Framework (4RF), which laid out a multi-sectoral strategy for rehabilitation and reconstruction in a climate-resilient and inclusive manner.

Sharif said the climate crisis had severely threatened the nation’s capacity to achieve the UN’s Sustainable Development Goals (SDGs). The return to business as usual was out of the question.

“The world needs to employ vision and solidarity to transition to a sustainable future of hope,” he said.

Pakistan witnessed a “monsoon on steroids” that affected 30 million people, displaced more than 8 million, and washed away roads over 8,000 kilometers.

According to the National Disaster Management Authority (NDMA), 2,000 health facilities, representing 10% of all health facilities in the country, have been either damaged or destroyed. As a result, over 8 million people in flood-affected districts urgently need health assistance.

Finance Minister Ishaq Dar said that $8.7 (90 pc) of the pledges were project loans.

Rozia Begum, a resident of Swat district in Khyber Pakhtunkhwa, said that she required medical assistance during the flood. Because it wasn’t forthcoming, she lost her premature child.

“Now, my sister-in-law is pregnant and needs multivitamins and regular checkups to enable her safe delivery,” Begum, 30, a schoolteacher, told IPS. She knew several child-bearing women in her locality were malnourished and couldn’t afford a balanced diet.

“The grants announced at the (Geneva) moot could help the needy women if made available immediately,” she said.

Affected people are also thankful to UN Secretary-General António Guterres, who urged the international community for “massive investments” to help Pakistan in his opening remarks at the Geneva moot.

“No country deserves to endure what happened to Pakistan,” the secretary general said.

Mushtaq Ali, a vegetable vendor, said that the UN should ensure direct financial aid to them. He said he lost his tiny home in Kalam Khyber Pakhtunkhwa and now lives with his father-in-law.

“The government should compensate people on the pattern of mechanism adopted during the Covid-19 pandemic and affected population received money on data of National Database Registration Authority,” Ali, 42, said.

UNICEF representative in Pakistan, Abdullah Fadil, told reporters that acute respiratory infections among children, a leading cause of child mortality worldwide, have skyrocketed in the flood-stricken areas.

The number of cases among children identified as suffering from severe acute malnutrition in the flood-affected areas monitored by UNICEF nearly doubled between July and December as compared to 2021, and estimated 1.5m children still need life-saving nutrition interventions, Dawn newspaper reported.

“UNICEF’s current appeal of $173.5m to provide life-saving support to women and children affected by the floods remains only 37 percent funded. Children living in Pakistan’s flood-affected areas have been pushed to the brink,” he was quoted as saying.

The rains may have ended, but the crisis for children has not. Nearly 10m girls and boys still need immediate, life-saving support and are heading into a bitter winter without adequate shelter. He added that severe acute malnutrition and respiratory and waterborne diseases, coupled with the cold, are putting millions of young lives at risk.

In response to the worsening child survival crisis, more than 800,000 children have been screened for malnutrition; 60,000 were identified as suffering from severe acute malnutrition — a life-threatening condition where children are too thin for their height — and referred for treatment with ready-to-use therapeutic food (RUTF).

Dr Abdul Ghafoor Shoro, secretary general Pakistan Medical Association (PMA), told IPS that the warning by UNICEF should serve as a wake-up call for the government.

“We demand immediate measures to save the lives and health of our children,” he said.