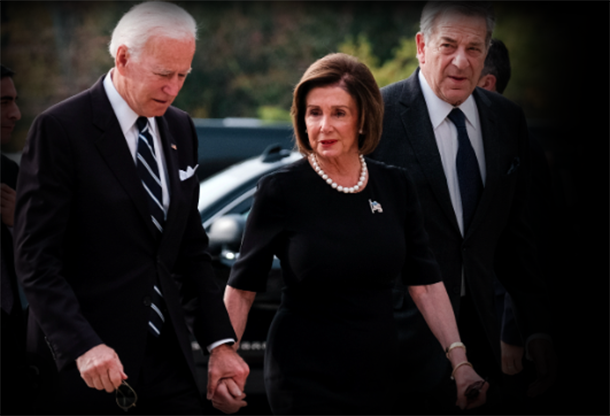 From one octogenarian to another… House Speaker Nancy Pelosi (D-CA) recently said during a popular Sunday talk show that President Joe Biden, who will be 80 yrs-old next week, should run for reelection in 2024, and proceeded to call him a “great president for our country, and someone who “has “accomplished so much” for the country in his first two years in office.

With the economy in free fall, and inflation continuing to soar due to policies implemented by the Biden White House, it’s hard to see what exactly those accomplishments are.

Speaking to “This Week” with George Stephanopoulos, the 82 yr-old Pelosi went on to say, “He has just done so many things that are so great.”

“He’s put money in people’s pockets, vaccines in their arms, children back in school, people back to work, for starters.”

Despite a near endless string of scandals, embarrassing gaffes, and a visible cognitive decline, the White House still insists that Biden intends to run in 2024, although no formal announcement has been made.

.@gstephanopoulos: “Do you think President Biden should run again?”

House Speaker Pelosi: “Yes I do. He has accomplished so much.” https://t.co/DUOI4Aiets pic.twitter.com/VXnD44fgzK

The current post-midterm media narrative is that the Democrats outperformed expectations, giving Biden a slight bounce among skeptical Democrats who acknowledge his deteriorating mental faculties, and disastrous policies.

However, that feeling of confidence could be short-lived, as opinions polls still show Biden tanking in terms of public approval ratings.

Critics within the Democratic Party believe that the elderly figures like Biden and Pelosi should step aside a give way to a younger and more dynamic generation of leaders.

Democrats appear to have retained the Senate majority following the midterm elections, and claim they have performed better than anticipated in the House of Representatives – a result which is still yet to be finalized.