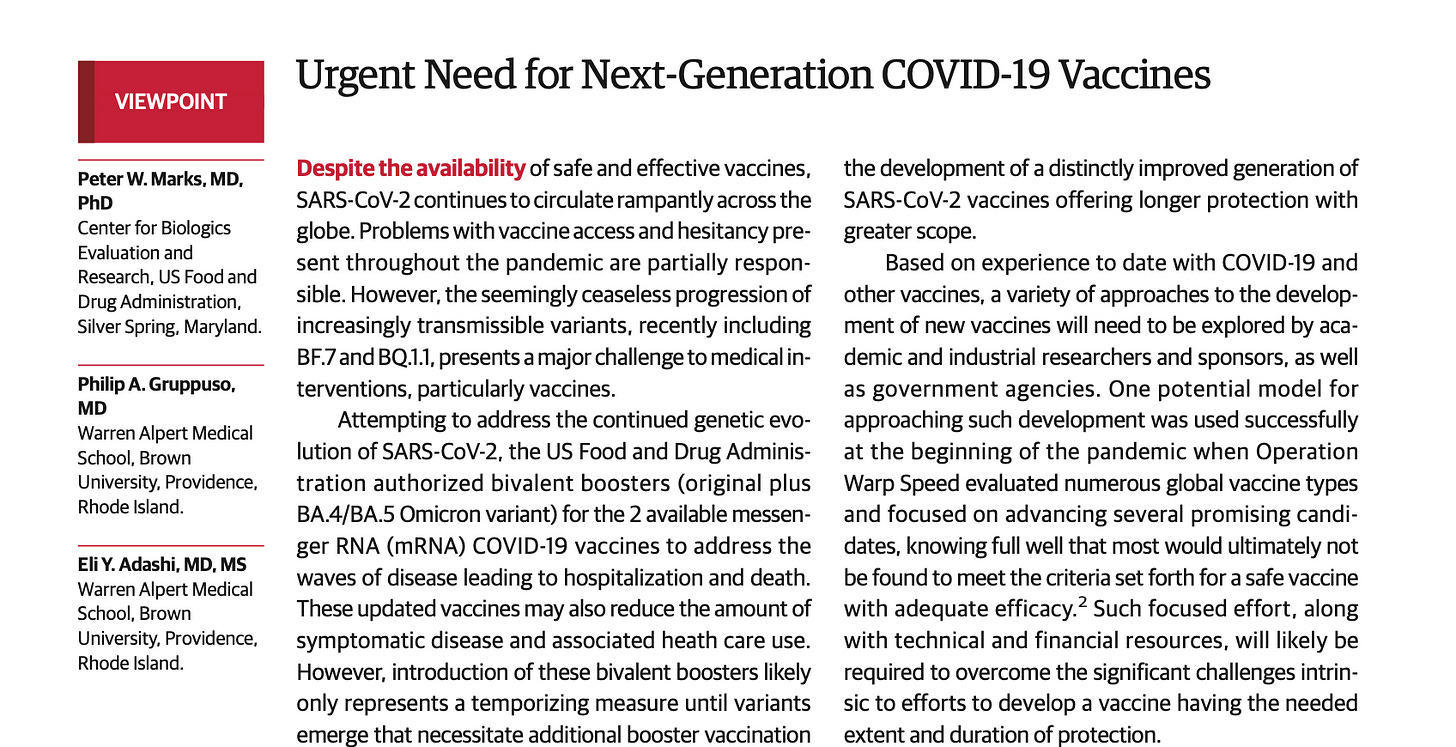 It is hard to admit we made a mistake. Sometimes, we don’t come out and say it, but inadvertently concede the fact. For instance, many who were vehement supporters of school closure, now argue, going forward, schools should not close. As nothing substantive has changed, that same argument applied months earlier. That might be as close as we get to an admission of error.

Recently, Peter Marks of the US FDA wrote an essay in JAMA where he discussed what companies will have to prove for future COVID19 vaccines. Ironically, he is now doing what many of us suggest all along: he is raising the bar. The bivalent booster was approved based on 8 mice Ab data, but now Marks argues, going forward, “large randomized clinical trials similar to the initial trials of the currently authorized or licensed vaccines for COVID-19 will be required.”

He notes, “updating the existing vaccine constructs with new variant sequences… is not likely to provide the depth and breadth of protection needed to interrupt viral transmission during a prolonged period.”

Duh, this applied to bivalents.

“the protection provided by vaccination would need to apply across a wide range of potential variants that might emerge.”

Whoops— bivalents did not generate better omicron Abs than the OG vaccine, and breakthroughs were ubiquitous, including those that affected Walensky and Califf.

“the vaccines would ideally not only protect against hospitalization, death, and symptomatic disease leading to increased health care use but would also reduce viral transmission”

Whoops— he had no good data bivalents lower hospitalization or death. Given that both Rochelle Walensky and Bob Califf had breakthroughs right after getting the bivalent vax. It is pretty sure bivalents don’t make even a small dent in transmission.

Moreover, he has never asked companies to measure transmission. All they would need to do is swab those randomized and those around them on some random schedule. Why not demand these data from Pfizer and Moderna?

In the essay, Marks explains that “introduction of these bivalent boosters likely only represents a temporizing measure”

Temporizing? That is not the way they are being marketed by the FDA.

Finally, the one note that Marks gets wrong is arguing that we ought to approve a future COVID shot if it reduces transmission even modestly (40%). This would be absolutely a bad decision. Only a tiny fraction of the 8 billion people on earth would get it, and the 40% (transient) reduction in transmission, would turn into ~0% reduction over the next year globally. It would be spitting the ocean, and have no value. Marks needs to rethink this.

In short, the recent JAMA essay is a logical admission that Marks and Califf and the FDA were wrong to grant EUA to the bivalent booster. All of the same arguments for RCT that they wish to direct going forward apply to this erroneous decision. The FDA is not doing well in recent years with aduhelm and exondys and now bivalent boosters.

If they don’t set logical and consistent standards then the agency is just accelerating political efforts to dismantle their power. But perhaps that die is already cast.