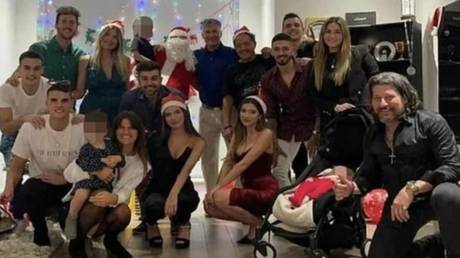 A trio of stars from Jose Mourinho’s Tottenham Hotspur have found themselves at the center of a media firestorm after appearing to disregard the UK’s Covid-19 guidelines by gathering together for a Christmas party.

The three players, Giovani Lo Celso, Erik Lamela, Sergio Reguilon, as well as West Ham’s Argentine international Manuel Lanzini, were outed when a mutual friend posted a snap of the the four Premier League footballers grouped closely together along with eleven other adults, two children and a baby.

This is a direct violation of UK government guidelines issued on December 19 which prohibits people living in Tier 4 region, such as London, from mixing with people outside of their own household. Places outside of Tier 4 allowed for up to three households to congregate on Christmas Day, December 25.

Tottenham – who didn’t feature any of the three offending players in Saturday afternoon’s 3-0 victory against Leeds United – issued a furious statement on the matter, saying that they are “extremely disappointed” in the actions of their players.

“We are extremely disappointed and strongly condemn this image showing some of our players with family and friends together at Christmas particularly as we know the sacrifices everybody around the country made to stay safe over the festive period,” the club announced.

“The rules are clear, there are no exceptions, and we regularly remind all our players and staff about the latest protocols and their responsibilities to adhere and set an example. The matter will be dealt with internally.”

I want to apologise for a bad mistake I made over Christmas and I take full responsibility for my actions. I know people have made difficult sacrifices to stay safe and I should be setting a better example. 🙏🏼🙏🏼🙏🏼🙏🏼

Why did @SpursOfficial manager Jose Mourinho put Sergio Reguilon on the bench when he’d contravened COVID Tier 4 restrictions – whereas Lamela and Lo Celso were omitted – surely all three should have been left out or do principles not exist!

This is shocking and so disrespectful the players should know better, when are these players going to learn there not above the law. Money breeds arrogance

West Ham, meanwhile, also issued comments to the press to express their own disappointment at Lanzini’s actions.

“The club has set the highest possible standards with its protocols and measures relating to Covid-19 so we are disappointed to learn of Manuel Lanzini’s actions. The matter has been dealt with internally and Manuel has been strongly reminded of his responsibilities,” the London club said.

Eagle-eyed social media sleuths have determined that the offending photograph was likely taken in the home of ex-PSG player Lo Celso, given that silverware associated with his time in the French capital is apparent in the snap. While the location of Lo Celso’s home is unknown, another picture apparently taken at the same location was tagged as being in London on Instagram.

The transgressions of the Premier League foursome is the latest such incident of players landing in the firing line for flouting rules throughout the Coronavirus pandemic which ravaged global sport for much of last year.

Well-known Premier League stars Jack Grealish, Mason Mount and Kyle Walker are just three who were spoken to by their clubs for similar instances of rule-breaking.